Let's get something out of the way first - SSX is not a snowboarding sim. If you're looking for something that accurately recreates the sport, the skill and balance required, and terrain and surface effects, then you'll have to wait for another snowboarding game to come along. If you're familiar with the SSX games on the prior generation of consoles, then this won't come as any surprise to you as the series has always been over-the-top. The modern iteration continues that tradition and then some, emphasizing the "extreme" in "extreme sports".

The premise in SSX is that Team SSX finds itself in a competition with an elite snowboarder named Griff to be the first to conquer the world's nine deadliest descents. These descents will take you to the most famous mountain ranges in the snow sports world as well as less-traveled locations such as Siberia and Antarctica. Each descent also uniquely represents one of the dangers of the sport, so to conquer a descent you'll need to contend with altitude, cold, trees, avalanches, and other dangers. When you travel to a new region, you'll have to beat a few challenges before you're able to make an attempt on the deadly descent. These will either be races or stunt challenges, and you'll take on top snowboarders in an attempt to recruit them into Team SSX or go up against Griff himself. Each region has unique terrain and features, both realistic and fanciful - for example, in Siberia you'll be able to grind along the walls of a long-abandoned nuke plant. Beat these events (or fail at them enough times that the game asks you if you'd just like to move on) and you'll be able to attempt the deadly descent. This will be less a matter of competition and more a matter of survival, with the goal being to make it to the bottom alive. Deadly descents don't leave you with much margin for error, and beating one is more a matter or route memorization than it is an exhibition of mad skills. Take on a deadly descent and live to tell about it, and it's off to the next region.

Tricks are the heart and soul of SSX, and even when you're racing you'll need to dig deep into your bag of tricks to earn the boost you'll need to leave your rivals eating your wake. You'll have two options for trick control, one using the face buttons and the other the right stick. The stick controls are intuitive and responsive, and you'll quickly become adept at pulling off tricks and chaining them into high-scoring combos. The face button controls are included primarily for those who played SSX games back in the old days, but they're responsive enough in their own right if not quite as intuitive as the stick control. In either case, tricks are so easy to pull off that those looking for some challenge are sure to be disappointed. Sticking the landings is even easier - just let go of the stick and release the buttons and you'll nail the landing every time. Grinding is even easier since all that you need to do is hop on a rail and you're good to go. There's no need to worry about your balance as it's all handled for you automatically. While you're grinding you can perform tricks using the same controls as you do for the aerials. About the only way to fall off of a rail is to jump and try a trick before you land since it's hard to complete the trick and let go of the controls before you land when the jump height is so short. If you resist the urge to try an aerial trick and stick to grinding tricks, though, you'll never fall of a rail. 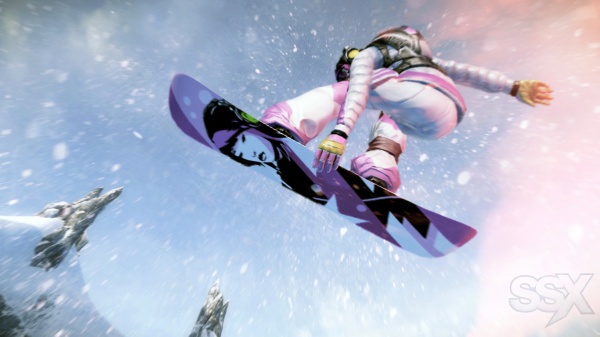 Successfully stringing tricks together will reward you with a combo multiplier that will be broken and reset if you crash or if you take too long between tricks. The game provides you with an assist in keeping your multiplier going with two ground trick buttons. Calling theses "tricks" is a bit of a stretch, though, as all you need to do is to hold down the X or the B button and you'll automatically do the trick for as long as you keep the button depressed. Again, unless you run into a tree or off of a cliff, there's no way to fail the trick - just keep your finger on the button and you're golden. Combos are not only the key to high trick scores, they also fill up your "Tricky" meter. Once this is full you can pull both triggers while in the air to pull off an uber trick - and, yea, all that you need to do is to pull the triggers and be sure that you let go before landing and you'll nail the uber. Each character in the game has his or her own signature uber trick, and in keeping with the spirit of the game they are all decidedly impossible to perform in the real world.

Tricks are of course important in the trick events where the highest trick score at the end of the run takes the event, but they also matter in the race events. Tricks will fill your boost meter which fuels your turbo, and turbo is basically the human equivalent of nitrous in the game. Turbo will send you flying down the slopes at super speeds and give you some serious air off of the jumps. Turbo also comes in handy during some of the deadly descents because you'll need it on some of the jumps if you're going to clear some of the gaps on these descents.

If you do wipe out on a landing or fly off of the cliff, the game gives you a second chance with its rewind button. Immediately press the right bumper after you make a mistake and the game will rewind time until you let go of the button or you max out the available rewind time. You'll then take control again and have the chance to try again and change history. Rewinding does come at the cost of points or time off of your final score and you can use it only a few times in each event, so you should probably save it for those cliff falls. Rewind is pretty much a necessity on the deadly descents, as they usually feature plenty of cliff drops and it's easy to mistakenly select a line that only leads to a fatal fall.

In addition to the chase to beat Griff, the game has an Explore mode which opens the world's mountain ranges to you giving you 150 different runs to choose from - there is some overlap, so there aren't 150 totally unique runs in the game. You can use these runs to earn credits, add to your gold medal collection, or to compete against your friends' scores and show them who is truly master of the mountain. 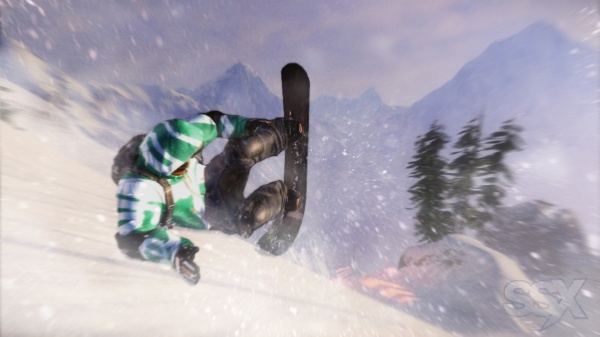 Once you level up your roster of boarders and purchase some of the stat boosting advanced gear, you'll be ready to compete in the game's RiderNet online mode - actually, you can jump into this mode and compete in events at any time, but you're not going to be able to compete for the top spots with a low-level rider and some events will require the use of equipment that you must first unlock in the game's story mode or a hefty entrance fee. RiderNet has a number of events open for competition at any given time, and you can enter one and try and run it as much as you want before the event ends. Depending on your finish you'll win credits that can be used to purchase new gear or enter the events that require an entry fee. You won't be completely isolated as you play as other players who are participating in the event at the same time as you will appear on the slopes with you and you can run with the "ghosts" of your friends' (or rivals as they're called in this game) runs if they've entered the same competition. This is a nice touch which reduces the feeling of isolation in what amounts to a rather solitary online mode.

The RiderNet mode adds additional ways to compete with other players beyond the event standings. First, if you find a geotag in the game's single player modes you'll have the opportunity to drop it somewhere on the mountain on one of your online runs. Your geotag will earn you a bounty based on how long it stays online before another player collects it by picking it up on a run. The more out of the way and harder to reach your tag is, the more likely you are to get a bigger bounty for it not being claimed. There's also an incentive for you to collect other players' geotags as each pick-up also comes with a bounty when collected.

So where does all this leave us? The game looks great, and mixes its fantasy elements seamlessly with some of the most realistic depictions of mountainous terrain that you've ever seen in a game. And the scenery doesn't come at the expense of performance, because SSX plays fast and smooth - really fast and smooth. The ease of the trick system is a bit disappointing, making the game's challenge more of a question of maintaining multipliers than of actually trying to pull off insane tricks in the first place. RiderNet is a good system to keep you coming back for competition, but the absence of a straight multiplayer simultaneous head-to-head mode is sorely felt. All in all, though, the game's a lot of fun to play and will keep you virtually carving well into the long, hot summer.