Call of Juarez: The Cartel Review

Wow. Not sure what happened here. I enjoyed the last Call of Juarez game, Bound in Blood. It wasn’t a Red Dead Redemption, but it was a fun romp that made you feel like you were in a Spaghetti Western. Unfortunately, about the only thing that The Cartel shares with Bound in Blood, or the first non-subtitled Call of Juarez game for that matter, is “Call of Juarez” in its title. This is a big step backwards for the series, in terms of gameplay, graphics, and story, and after The Cartel the series should probably go on hiatus for a bit and then undergo a complete reboot.

The game’s utterly preposterous storyline begins with a Mexican drug cartel carrying out a terrorist attack on a government building in the US. It’s highly doubtful that the Mexican cartels of our world would carry out an act likely to elicit a military response from the US, but in this game’s fantasy world it does happen and the US responds by putting together a three person team. Even further stretching the limits of believability, this team consists of an FBI agent, a DEA agent, and an LAPD officer, all of who have questionable service records, are dirty, and have near-sociopathic difficulties in getting along with others. Making matters worse, you’ll have to play the game as one of these three characters, none of which is the least bit likeable. Within a half hour into the game you’ll regret your choice of character no matter which one you selected, tortured by their inane and clichéd dialog and annoyed by their secret (from the other characters) objectives that require you to do such honorable things as stealing drugs and drug money from crime scenes to secretly supply pushers and to pay off gambling debts to a bookie. 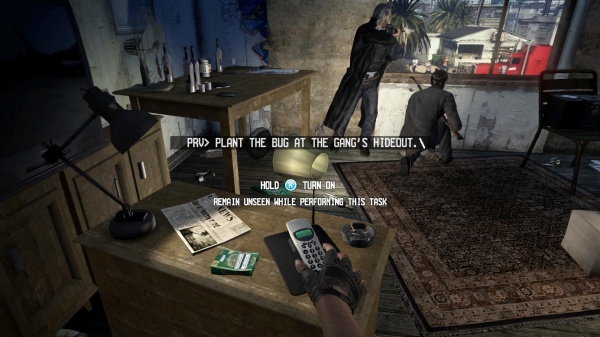 In The Cartel, you pursue justice by shooting first and asking questions later. Well, you don’t really ask questions at all, you just shoot, conducting your investigation by killing people by the hundreds. The mission design supports this law enforcement philosophy and exhibits just as much imagination. You’re forced to drive to a location, which is about as exciting as your morning commute, and then you move from one triggered gunfight event to the next. Just about everything that happens in the game is very predictable, and many of the gun battles seem to be put into the game simply to pad its length. Further padding is gained from the game’s sparse checkpoints that make you pay for a mistake by replaying large stretches of missions that weren’t that much fun the first time through.

The game’s mechanics are adequate, and while I seem to remember things like the gunplay and enemy AI being a bit better in Bound in Blood that could simply be due to the fact that the game wrapped around the shooting was a lot better in Bound in Blood. I can say with certainty though that the bullet time mode in Bound in Blood was far better than it is in The Cartel. In The Cartel it’s so useless that it’s not even worth bothering with it. While it does the job of forcing enemies to move in slow motion, your controls are made so sluggish that there’s little if any advantage to be gained from it.

Multiplayer is supported through co-op play in the campaign and competitive play over Xbox Live. For co-op play, three players can play the campaign together with each player taking the role of one of the game’s three characters. Unfortunately the game will only let you start a co-op game on a level that all players have already reached on their own. I suppose that this is done in attempt to preserve the story’s integrity for the player who’s played the game the least so far, but the story’s such a mess that this is an irrelevant restriction. Competitive multiplayer is another of the game’s many steps backwards – relatively fun in Bound in Blood, decidedly not so in The Cartel. Subpar map design and control issues put the multiplayer game on shaky ground from the start, and these problems coupled with team-based objective play that just wasn’t designed well and a completely dysfunctional partner system that forces you to buddy up with a randomly-assigned stranger make the multiplayer game a “one and done” experience for most gamers.

Final Rating: 45%. This is one Call of Juarez that shouldn’t be answered.