Everyone has been expecting greatness from the sequel to The Elder Scrolls IV: Oblivion, which was a critical and commercial success to the point that it belongs on any list of the best games ever made. Oblivion came out when open world exploration wasn't a part of every other game like it is today, and it also sported deep mechanics for almost every aspect of gameplay and had amazing graphics. The Elder Scrolls V: Skyrim, is finally here, and the only question should be: will Skyrim be too much like Oblivion?

Skyrim starts just like Oblivion; you are a prisoner being taken to a good ol' fashioned execution. Because it would make no sense to start a game with creating a character only to be executed immediately, a dragon arrives and disrupts the proceedings to inadvertently save your tail and that of the rebel leader who was also scheduled to die. From there the main story has you fulfilling an old legend of becoming a Dragonborn. But just like in Oblivion the main quest can be put on the backburners for any of the side quests, minor quests, and dungeons you can handle. The main quest is your standard hero stuff, possibly not on par with the Oblivion main quest, but this is a non-issue.

The first thing you will notice is the extremely deep character creation. You may be disappointed by the lack of any additional races from Oblivion, but you should appreciate the high level of detail in just the preset faces alone, never mind all the customization at your disposal. The best way to describe it is that you will have to put in a lot of effort to make a character look bad, as most changes you make will already be custom-fitted to "look right." Unlike Oblivion where the humans and elf races just had different skin color, all of them now look more distinct while the orcs, Khajiit, and Argonians look less hideous than before. The elves are interesting to say the least as they may be the hideous ones now. Their base looks may or may not be creepy to everyone, but at least you can change their faces to your liking. 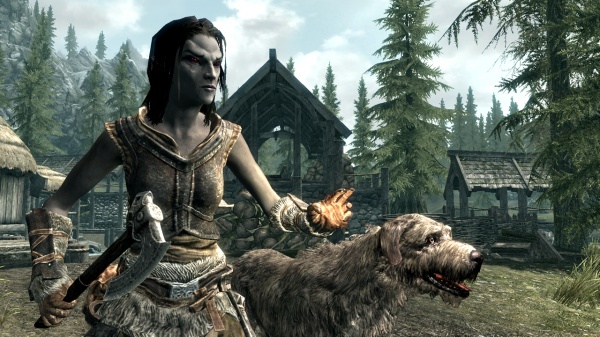 A face changed to the liking

The specialization and stat mechanics are completely different from Oblivion. If you recall, Oblivion had you locking up what you wanted to be from the start, and if you messed things up or played against your chosen spec you would find the game very difficult. Not to mention the great mystery of how certain stats were increased with leveling. In Skyrim you have more traditional talent trees for everything from spell types, weapons, armor, speechcraft, and so on to improve as you wish. These talent trees give bonuses to the skills they represent; such as a damage boost for archery or reduced costs to cast spells. As you level you gain a point for these so called "perks." It's a fluid system that allows you to better adjust your game on the fly, rather than completely doom yourself if you grow to like a different play style than what you already invested in. On top of that, you can't buy further perks until you further develop the skills, so you are encouraged to buy perks from other skills by design. And probably most notable about this talent system is the cool menu, which has brightly colored constellations in the sky; it's not much, but the eye candy is more than welcome.

Once you got your character and you have an idea of how you want to kill things, and you chose your star sign that helps you gain certain skills over others, you then set out for fame and loot. The best new feature is the revamped menus. For the 360 you just need to press B and the game will pause to let you choose between going into the skill, map, item, or magic menus. Rather than the tabs system for the old menus, every menu in this game keeps everything under an entry in a list, which looks better and feels easier to navigate than in Oblivion.You are allowed to set favorite spells and weapons for quick selection during combat from a drop-down menu; which also pauses the game. The map is more of an overhead view of the entire world, unlike the paper map in Oblivion. It might be a little harder to know exactly where you are in the realm of Skyrim, but as you learn where everything is and how to track quests you may like this map better than the old, simple map. The quest menu is much improved over Oblivion as well. It keeps active quests on top while archiving completed quests on the bottom, with a miscellaneous entry in between that keeps track of all your minor quests. Changing around your active and tracked quests may be a bit cumbersome at first, but over time you may like this quest tracking system better than in other RPGs. 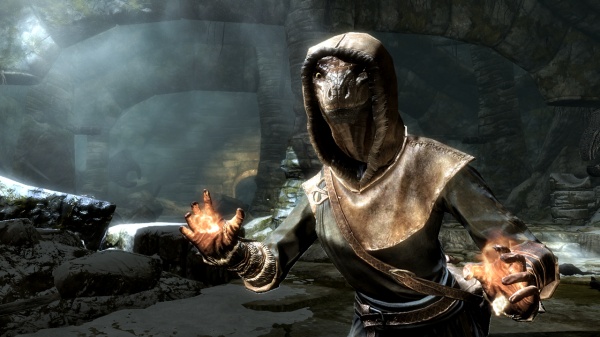 The biggest improvement in combat is that magic users will finally feel capable and not disadvantaged from the melee or stealth users. Rather than shooting feast-or-famine fireballs, you will now shoot out streams of flame - you'll be a flamethrower with much more room for inaccuracy. And of course you can learn more types of spells, but you still have to buy or find new spells to learn. Other than the better casting system, which includes dual-casting, the regular combat is unchanged. One issue is that it's very easy to swing a melee weapon twice, and drawing your bow to quickly fire an arrow isn't so easy.

As mentioned at the start, the character models are much better than the unrefined faces in Oblivion. The graphics in general are outstanding - since Oblivion's graphics stand up to this day, the improvement in Skyrim is not to be understated. Perhaps the biggest factor is the quality of the special effects and lighting. Spells have more particles, lights and shadows are sharper, textures are smoother, and weather effects feel real. The game really shines through when you fight a dragon. They fly in vast patterns in the sky, seemingly of their own will and attack any NPC in their path. They can breathe fire or frost and when they land they have a nice landing animation that kicks up dust. They get bloodied as you damage them, and when they die their corpses will turn to ash and their souls will be absorbed by you. From beginning to end, a fight with a dragon highlights everything that makes this game look amazing. Perhaps this high quality of graphics accounts for the length of the loading screens, but it's a small price to pay in the long run, and the majority of dungeons are loaded at the start. It doesn't appear there are any loading times in the open world. 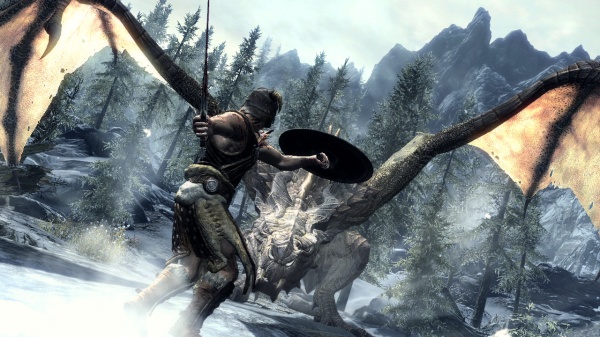 NPCs (non-playable characters) still follow their own schedules, but in Skyrim they don't waste your time. One of the bigger changes is that speechcraft is automatic, and you don't play the sliding pie game to make people like you anymore. Chat topics will turn gray among all NPCs after heard once, and you can press a button to speed the chat up and bring up the next selection of chat options while the NPC is still talking; you can even leave the chat and the NPC will continue saying whatever they were saying. Best of all, you aren't given the option to chat with all NPCs if they have nothing interesting for you. And though there are hundreds of NPCs in Skyrim, they all seem to have their own unique greetings or in-passing comments. Voice actors are recycled, as you would expect, but the world still feels completely alive from settlement to settlement. Children NPCs further bring the world to life, though I would expect the hand of God to come crashing down on you if you even think about striking a child, but I would not know. You can also bring an ally with you on your journeys, either by paying for their services at an inn or using the few you are given through quests. They aren't much help, and really you are most likely just bringing them to their dooms, but the option is nice.

So what were the major issues with Oblivion? First on that list would have been the massive amounts of glitches. In Skyrim it appears the early portion of the game has an abnormal amount of glitches as well, but this number lessened as the game progressed to just the occasional anomaly here and there. Oblivion had the annoying talent specialization system, which is completely fixed in Skyrim. Oblivion had you playing that odd pie game to get people to like you; it might have been fun for some, but it slowed down the game and is thankfully not present in Skyrim. Add in the improved graphics and NPC differentiation and all of it comes together to firmly establish Skyrim as a worthy successor to one of the best games ever.

So back to the big question at hand: is Skyrim too much like Oblivion to the point where it loses credibility? In a word, no. If Skyrim had the exact same game engine and mechanics of Oblivion it would most likely be a contender for game of the year. But by addressing every issue from the last game and improving everything else, Skyrim leaves little room for error for the next game in the series.

Final Rating: 98% (1 point for the loading screens, and 1 point for the glitches in the first hour of the game). If you lost hours and hours of your life to Oblivion, expect the same from Skyrim and then some.