Batman: Arkham City can be generally described as Escape From New York meets Bizarro Grand Theft Auto. Escape From New York because a swathe of Gotham has been walled off and turned into a prison city. Bizarro GTA because the game gives you an open-world city filled with side missions, collectibles, and roaming denizens, except in this case you are the good guy and all of the citizens are bad. Batman enters Arkham City under arrest as Bruce Wayne, the result of the work of Hugo Strange, who is not only privy to Batman's secret identity but is also planning a takeover of Arkham City followed by all of Gotham through a secret operation codenamed Protocol 10. The story kicks off with a rushed introduction that may leave you a bit confused and then slows way down as it turns into a who's who parade of Batman villains, but eventually it all comes together satisfactorily. Overall a tighter story would have made for a better experience from the narrative perspective, but the game is so much fun that this can easily be forgiven when all is said and done. But back to the beginning � suffice it to say that Wayne doesn't remain in shackles for very long and after a care package is dropped into the prison city by the ever faithful Alfred Batman is loose in Arkham City and after Strange.

While Arkham City may be a little on the small side as far as open worlds go, it's sure to be one of the most atmospheric ones you've ever roamed. Arkham City has the gothic look of Tim Burton's vision of Gotham City and is locked in the bitter cold of a seemingly perpetual winter's night. The city has the look of a place that was once a center of commerce and industry but that is now just the shell of its former self. The criminals confined to Arkham City have begun to make the city their own and signs of Joker, Riddler, and other infamous criminals and their gangs are everywhere. The city is intricately detailed from top to bottom, but as Batman you won't be spending much of your time on the streets.

As you make your way across Arkham City along its rooftops and skyscrapers you'll quickly gain an appreciation for how the game makes it so natural for you to move as Batman himself would. It will quickly become second nature to you to glide and grapple hook your way from one side of Arkham to the other. The game only lets you attach your grappling hook to designated points and the logic as to what is grapplable and what is not isn't always clear, but it's not too difficult to live with this restriction. If you do make a mistake, a bat always lands on his feet and Batman will automatically catch air with his cape at the last second and come to a gentle landing. The various swoop, glide, and dive maneuvers that you perform while just moving around the city also come in handy when you want to get the drop on a criminal. It's pretty satisfying to spy a criminal from a rooftop vantage point and then knock him off of his feet with a glide kick he never saw coming. 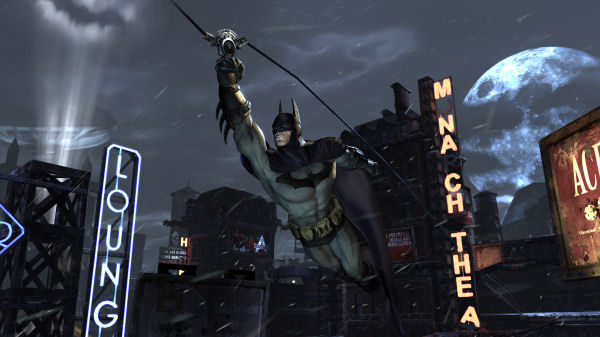 Batman sure knows how to get around town

When you enter into one of your frequent scuffles with the criminal element you'll enjoy the way that the game's simple fight controls so elegantly make you feel like the master fighter that Batman is. Timing and facing are important, especially when Batman "senses" that an attacker is about to strike as indicated by a set of wavy lines emanating from his head. React in time and Batman will perform whatever move that he needs to do in order to interrupt and counter the attack. After being so accustomed to seeing fighting games lazily fire off a couple of canned animations over and over again, it's hard not to be completely impressed with the fights in the game. They flow so naturally that they look like they are pre-choreographed by a professional stunt coordinator.

At first it may seem that such a system would make the fighting a button-mashing breeze but that's far from true. Button-mash and you'll miss the opportunity to make a critical strike or counter an enemy attacking you from behind and you'll quickly find yourself being overwhelmed because packs of thugs descend on Batman like rats on cheese in this game. The odds are so often out of your favor, especially when the criminals are armed, that you'll often have to resort to thinning their ranks on an individual basis.

The game gives you all the tools that you need to stalk evildoers just as Batman would. You can flit and grapple your way between hidden perches looking for the opportunity to get the drop on a thug when he least expects it and is out of sight of his comrades in crime. A number of moves are at your disposal to do this, so you can hit a criminal across the room or one that's right below you. Taking down a room full of criminals this way is a big part of Batman: Arkham City's gameplay and the environments and controls are well-suited and expertly designed to take advantage of this. 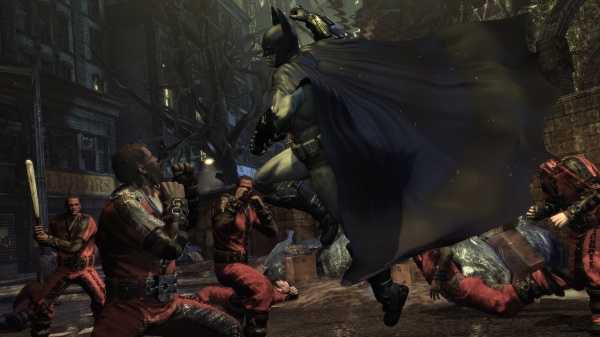 This isn't a fair fight ... for the criminals

One of Batman's lesser used nicknames is "the world's greatest detective" and the game models Batman's finely-honed sense of detection through its detective mode. With the press of a button you can enable this mode and the view changes to a blue and white colored view that lets you �sense' the locations of enemies and key environmental features, even behind obstacles and thin walls. It's like an IR+ view mode, except not as grainy and with enemies and key objects highlighted in bright orange. Detective mode plays a key role in helping you work a room to exterminate its thug infestation, but it's also an important aid to solving puzzles by highlighting interactive panels, important conduits and pipes, and access points to alternate routes. While this may make it seem like detective mode takes all of the fun and challenge out of the game's puzzles, this is simply not the case. The puzzles in the game can be fairly challenging, and even though detective mode may reveal some of the components of the puzzles it doesn't tell you how to solve them.

Puzzles not only appear in the game's story missions, but are scattered throughout Arkham City thanks to the Riddler. The Riddler has placed trophies for Batman - and Catwoman, with trophies only obtainable by her scattered about to encourage purchasing the game's online pass by those who picked up the game used - to collect throughout the city, indoors and out, in alleyways and rooftops. Rarely simply there for the taking, they're usually protected by a cage that can only be opened by solving a puzzle or finding a hidden location. Some of these puzzles can be real brainteasers, and the game is kind enough to let you tag on the map any trophy that you've found but are unsure of how to obtain so that you can come back and revisit the puzzle later. Solving a puzzle and grabbing a trophy does more than just give you a sense of self-satisfaction; each trophy unlocks a challenge level for play which is scored and includes Xbox Live leaderboards. The Riddler is also true to his name in that he gives you riddles to solve as well as the trophy puzzles. The answers are tied to locations within Arkham City and are essentially two-tiered puzzles - once you solve the riddle you still have to find the location that the answer is referring to. 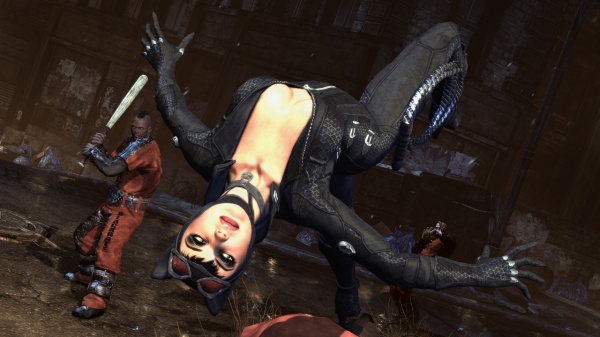 Show off your Catwoman-like reflexes

Batman: Arkham City is an amazing game that will keep you occupied for hours on end, with both its story missions and the large amount of additional content it gives you to explore. I have a couple of minor complaints with it, firstly that sometimes it can be difficult to find things even when they're marked on the in-game map due to the game's verticality and numerous indoor and subterranean locations. I spent a bit too much time running around and up and down buildings trying to find an item or entrance. Secondly, the event trigger hotspots in some of the game's missions are too small or tricky to trip. I wasted too much time running around a mission location wondering what to do next only to find that when I finally hit a certain spot I was able to move the mission forward. Overall, though, it's arguably one of the best games this year, if not the super hero games ever made.

Final Rating: 96%. Batman: Arkham City sets the standard against which future superhero games will be judged.