Those poor scientists. They finally capture Splosion Man, only to accidentally create Ms. Splosion Man during their celebratory party. And even worse, her one goal in life seems to be to get out of their massive science complex while destroying everything along the way.

If you played Splosion Man, then you'll be familiar with the basic mechanics of the game (and please bear with me for just a bit for those who haven't). Ms. Splosion Man is a side-scrolling platformer with a simple one-button play mechanic; press the button and Ms. Splosion Man splodes, I mean explodes. Don't worry, though, she's a bundle of energy, both literally as well as figuratively, and exploding comes naturally to her. Exploding serves a dual purpose, powering her jumps and frying any nearby enemies. Although it's a simple mechanic it goes a long way. You can use the explosions to wall-climb, double-jump, and perform a number of other maneuvers ï¿½ but there is a catch. Ms. Splosion Man can only explode three times in a row before she loses energy and she'll need to wait for a moment before she's charged up again.

You might think that such simple controls make for a pretty simple and easy game, but nothing could be further from the truth. The is rather challenging and probably too much so for the casual gamer, but those who love games of the platform variety will find themselves falling for Ms. Splosion Man. The game isn't hard in a cheap way, but it will test your reflexes and require you to go through a little trial and error as you make your way through the levels. When you make it past a particularly tricky spot, you'll feel both satisfaction at your success and anticipation of what the game has in store for you next. And what is in store could be anything from a platform section, to a boss battle, to a high-speed run section. There's a surprising variety to the action for a platform title with a simple set of actions to build on.

Ms. Splosion Man is made even more enjoyable by the game's sense of humor and fun. The titular heroine is a bundle of energy with a perpetually peppy outlook and a fascination with pop culture that goes back at least to the 1970s. The game is packed with references and catch phrases and they're delivered in a blink and you'll miss something flurry throughout the entire game. And while our heroine is happily singing, dancing, and bouncing her way through the science facility she's gleefully burning, frying, and exploding the scientists that created her, both directly and through all manner of traps and devices that owe some of their inspiration to Rube Goldberg. 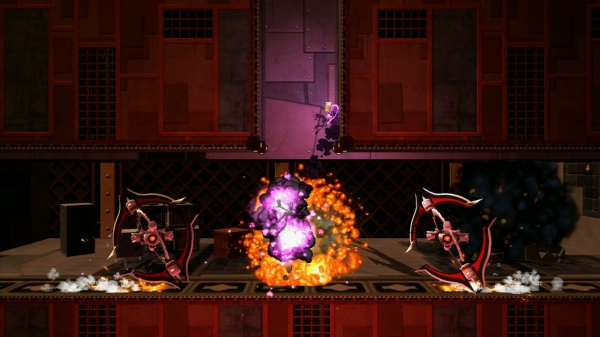 There's a surprising amount of gameplay packed into Ms. Splosion Man for a downloadable title, and once you make it through the game there are still ways for you to get even more mileage out of it. The game's levels are timed, so once you think you've got a level completely figured out you can go back and run through it again and try and improve on your time enough to grab a respectable position on the game's online leaderboards. But there's more here than just self-directed challenge for the perfectionist. The game also has a co-op multiplayer mode that supports up to four players. This mode features a completely new set of levels so you're getting two games in one if you also play the co-op mode. Co-op mode gives your Ms. Splosion Mans (Ms. Splosion Men?) a few new tricks, such as chaining off of each other's explosions to reach heights undreamed of in the single player campaign.

Ms. Splosion Man is an exciting and enjoyable platform game, thoroughly entertaining, and well worth your Microsoft Points. However, if you don't really enjoy platform games or haven't had much practice with them (or are short on patience), then you should probably pass on the game.

Final Rating: 94%. If you're a fan of classic platformers, Ms. Splosion Man is going to steal your heart.