Kinect has had an interesting existence so far. It's had a few good games like Dance Central and The Gunstringer while also providing us with some sloppy titles like Fighters Uncaged and Motionsports. It seems that developers are still figuring out what works and what doesn't for the motion-based controller. However no matter what the quality of game has been so far one thing that we haven't seen is an M-rated game for the Kinect. That's understandable since the controller is really aimed at an audience that tends to like games more on the friendly/happy/family side of things. Sega has decided it was time to toss that crowd to the side and throw a survival horror game at the senor and see what happens. Read on to find out what indeed does happen...

I like the survival horror genera and really enjoy a scary game. Rise of Nightmares isn't that scary which is, of course, a pretty big disappointment. However, SEGA is trying to do some things that are not expected of a Kinect title, mainly being "adult". The story is really a bad B movie type of script where you are an alcoholic husband, Josh, on a train trip with your wife Kate somewhere in Europe. You two have an argument about some things, your drinking habits being one of them, and she leaves your train compartment to go eat. Naturally all heck breaks out moments later as you see Kate being carried off by some creepy looking dude in a cool metal mask as some more sinister looking shadowy guy watches/controls from afar. The trains crashes and you and a few survivors are now trying to keep surviving while you also go looking for Kate. You rather quickly end up at the base of one nasty looking mansion complete with its own cemetery. Naturally this is where the game really starts its stuff with the hordes of undead and pieced together monsters. Like I said, B-movie stuff, but it's a fun B-movie at least. 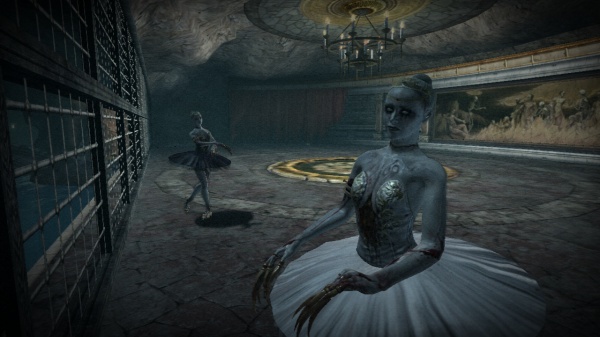 Rise starts off with you waking up in a cell with a hysterical French woman, not as Josh but another character in a scene that becomes the tutorial for the game. Obviously being a Kinect game you will only have your body to use to control your on-screen character. This has been a very hit-or-miss proposition with most Kinect games and is true here also. The body controls can be a little awkward, but so was the first time I played a first person point of view game like Wolfenstein. I was always walking into walls and around in circles. I have read and seen other gamers have a lot of problems with the control, but it worked out pretty well for me. Granted it's not up there with the responsiveness of a 360 controller, but it did work well enough for me and at times was quite responsive and added to the experience. Moving your character, Josh for the majority of the game, requires you to step one of your feet forward and leave it there. Move your feet back together and you'll stand still. Move your foot back and you will walk backwards. The bigger step you take the faster you will move on screen. So most of the time you will have one foot slightly in front of the other so that you are walking but not too fast. In order to turn you need to move your shoulders a little bit. Move them to the left and Josh will turn left, right to turn right. The amount of twisting you do control how much of a turn it will be. Face forward again to go straight. There are adjustments you can make to how sensitive the Kinect is to your movement and maybe I just got lucky that the defaults worked well more me. That said I still tweaked them a little and got the scheme to work even more smoothly. The developers might have been concerned with people having trouble with the walking in the game as they added an auto-walk feature where if you raise your right hand Josh will automatically walk to the next interesting spot in the game. I rarely used this feature for two reasons. First, when in this auto-walk mode you cannot look around and that means you might miss some cool weapon or hidden audio tape. But more importantly the reason I didn't use the feature was that I found it fun walking and looking around. The game isn't an on-rails type of game but it can certainly feel like it if you start to rely on the auto-walk feature.

Combat is probably the strongest part of Rise of Nightmares. Your weapons can range from just your hands and feet to the more entertaining knives and chainsaws. While I have never knifed a zombie in real life I think that the hacking and slashing movements I was doing in the game were probably pretty realistic. There is a sort of auto focus system that tries to help out with keeping you on target and it works well enough. Once you get a few bad guys around you it's easy to forget that your body movements are still controlling your position and you can end up facing the wrong way or backing up when you weren't expecting it. There isn't too much variety in enemies but it does pay to keep track of what works best for each. For example some have various armor plating on that will deflect your attacks so you need to strike at the areas that are more exposed. Besides the attack moves, which hints between levels suggest should be done in exaggerated movements, there are other are variety of other moments you'll be doing. These are not always obvious but also don't require much guessing. An example would be a section where you must keep your balance or fall to your death. At first I wasn't exactly sure what it was expecting so I died. The second time I put my arms out like I was walking a tight rope and that was the ticket. There are running areas, a section to swim, and even a part where you must swipe leeches off your arm. Most of the time I just did what seemed the most appropriate gesture and it was correct. 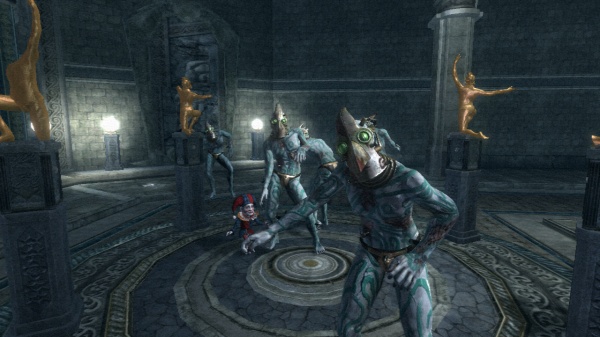 Graphically you're not gonna be getting anything that will knock your socks off. I keep being reminded of arcade games like House of the Dead and Virtua Cop. Sometimes there will be graphical glitches like your arms will suddenly look like they are not attached, but for the most part the graphics are not something to complain about. Like you would expect in a bad movie, the dialog is lame and the acting just as lame although it really doesn't distract too much. The overall atmosphere, sound, and music are good with atmosphere being a bit better than the other two. Rise certainly does all that it can to earn its M rating. There is a lot of blood and several scenes of a rather graphic nature like a dude torturing another dude and finally putting an axe in his skull. So, yeah, it wanted an M rating and went out and got it.

Final Rating: 76%. Rise of Nightmares is a fun Kinect game for those looking for some blood.