If you've never played BioShock, then bear with me for a bit here (and if you haven't, you certainly should - BioShock can be had for a low price these days and the game easily makes my Top Ten Favorite Games of All Time list). Even though BioShock Infinite takes place about fifty years before BioShock and moves the action from the undersea Rapture to the among-the-clouds Columbia, there's certainly a lot of "BioShock" in BioShock Infinite. Both feature isolated cities founded on the political philosophy of a megalomaniacal zealot; cities in their final death throes being torn apart from within. The Plasmids of BioShock have their counterpart in the Vigors of BioShock Infinite, giving you what amounts to a battery of magical attacks to complement your arsenal of conventional weapons. Even the familiar slot machine like trill of the vending machines that sell ammo, supplies, and upgrades will sound hauntingly familiar to BioShock veterans. But BioShock Infinite is far more than a BioShock retread wrapped in red, white, and blue bunting.

Let's start at the beginning. You are Booker DeWitt, a US Calvary veteran of the Indian Wars now working as a detective for the Pinkerton Detective Agency. Your current case is a personal one, and it begins with the simple and cryptic instructions, "bring us the girl and we'll wipe away the debt." While these words are certainly compelling enough to get Booker to take the case and allow himself to be taken to, and left at, a remote island lighthouse, you are given the distinct feeling that at least on some level the words are as mysterious to him as they are to you.

As you make your way from the lighthouse to the floating city of Columbia, you'll eventually find that girl, a young woman named Elizabeth who is kept prisoner in a tower within the city. At first Booker's primary concern is delivering the girl as promised, but I don't think I'm spoiling anything here when I say that events transpire that soon have Booker questioning whether or not he wants to deliver her to his faceless clients. 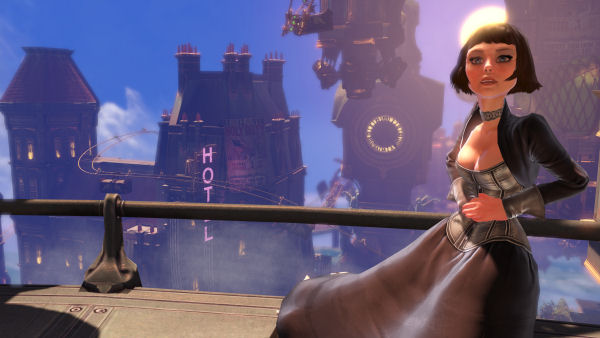 Once you find Elizabeth she essentially becomes your AI companion. I know what some of you are thinking, "oh, great, another bot to babysit while it runs into walls or blocks my way through doorways," but that's far from the truth with Elizabeth. Far, far, from the truth. While she's not quite up to passing as a human controlled co-op character, she definitely feels more alive than she feels "bot". A part of it is that she's never an obstacle; not only will you find that you never have to push your way past her, she's always moving about, exploring and taking in the wonders and horrors of Columbia by your side. I can't remember a single moment when I glanced in her direction and saw her standing still and blindly staring forward, as if she was in stasis while waiting for a trigger to bring her back to life. She was always looking around the area, finding coins or other items for me that I had missed on the first go round. And when she got a little bored, I'd spy her getting restless and fidgeting.

When bullets start flying, Elizabeth has the good sense to keep her head down and seek cover, and to move to a new spot if it starts to get too dangerous for her. Not only are you free from the worry that she'll wander into the line of fire, get herself killed, and force you to reload a saved game, but you'll come to rely on her for the health packs, salts (the mana to your Vigors), and ammo she scavenges for you while you're in the heat of battle. And she has another talent which is quite useful in a fight... 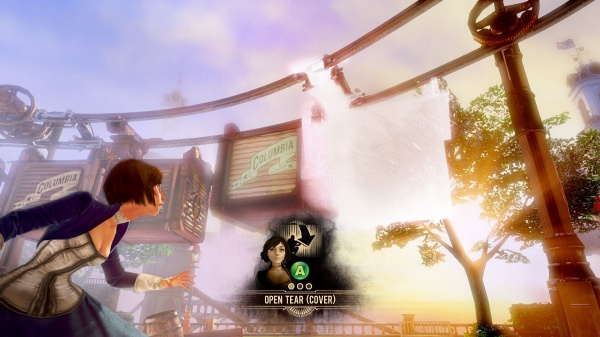 Elizabeth helps out by opening a tear

For reasons that are eventually revealed in the story, Elizabeth has the ability to open "tears" in space-time, allowing her to bring things from parallel universes into her own. For example, a parallel Columbia may have installed an automated turret in a plaza and another may have placed a crate of health packs nearby. By pointing at the ghostly image of something that can be warped in and pressing a button, you can ask Elizabeth to bring it through a tear into your universe to aid you in your battle.

The game does a lot more to bring Elizabeth to life. Part of that is due to the excellent script and Courtnee Draper's superb acting that give's Elizabeth her voice, but a lot of it is also due to the degree of expressiveness the game's developers have been able to bring to her. And the developers' decision to eschew cutscenes in favor of delivering the story entirely through gameplay makes it feel more like you're experiencing Columbia together with Elizabeth than escorting an automated construct who only comes to life when it's time to watch an in-game movie.

Elizabeth is a big part of the BioShock Infinite experience, but the game world that you share with her is also impressive in its own right. Columbia is an amazing city to behold, built across a series of floating islands reached by airships and an interconnected network of railings used to move cargo and material known as the Skyline. You'll be able to ride the latter yourself thanks to a grappling hook device that also serves as a particularly nasty melee weapon. The rail travel has a thrilling roller coaster feel to it and you can even attack enemies as you go flying by overhead. However, after completing the game it felt to me that the rail travel/battle aspect of the game was underutilized overall. The Skyline travel and battles were constrained to a limited number of areas and it felt as if the game wanted me to make more extensive use of the rails in battles, but failed to make it compelling or advantageous enough for me to do so.

The battles in the game can be pretty intense. The enemy AI is fairly good and able to overcome its shortcomings through sheer numbers. BioShock Infinite also has its share of heavy hitters such as the Motorized Patriot (a robotic George Washington packing a Pepper-Mill Gatling Gun) and while they certainly packed a punch and made the going tough for me on many occasions, to be honest I didn't find any of them to be as compelling as BioShock's creepy Big Daddies.

Vigors add a unique element to the battles, as they can make you feel like a heat-packing wizard. Eight different Vigors are available in the game, but they each have a slightly different effect if charged before casting. Vigors can also be combined with each other when cast in rapid succession to launch new attacks. For example, Murder of Crows sends a flock of crows to attack your target while Devil's Kiss gives you the power to shoot fireballs from your hands, combine the two and your enemies will find themselves facing a swarm of flaming crows. I found some Vigors to be more useful than others, and for much of the game I primarily used Possession to turn enemies into allies and Shock Jockey to surround myself with high-voltage electrical traps.

While the game is technically a shooter and delivers shooter gameplay that's above average for the genre, what really makes BioShock Infinite special is the game's story and setting. The depth of the story, along with its twists and turns and surprise ending put it on par with quality Sci-Fi novels and movies, and it will stick with you for some time after you finish the game. And the floating city of Columbia makes for a very unique and fascinating setting for a game. BioShock Infinite is as much an experience as it is a game, and an experience all gamers should enjoy.

Final Rating: 98%. An instant classic that should be kept in a special place in every gamer's collection.