By a strange quirk of fate, Alice: Madness Returns landed in stores the same day as another game that made gamers wait a very long time for the sequel. While Madness Returns is far superior to the epic failure that is Duke Nukem Forever, you’re still left wondering why some elements of the game aren’t better given that it was such a long time in coming.

In the original American McGee's Alice, Alice was committed to an insane asylum after the death of her family and soon thereafter returned to Wonderland only to find that it had become a much different, and much darker, place. In Madness Returns, Alice is out of the asylum but still in psychotherapy. She seems to be making some progress but soon begins to find herself in Wonderland again. Wonderland is now in even worse shape than before, and in order to find out what’s still eating at her sanity, as well as why her family perished in the first place, she’ll have to find out what’s tearing at the fabric of Wonderland and put a stop to it. 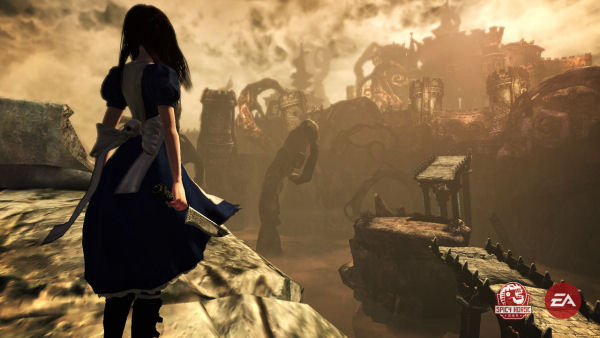 From a visual standpoint, Madness Returns is one of the most imaginative and creative games I've played in a while. Each of the game's chapters is set in a visually striking and very different looking part of Wonderland, and the chapters are separated by short levels set in a dystopian vision of Victorian London. As an example, the Mad Hatter's tea party is transformed into a steampunk world filled with floating factories and foundries made from giant tea kettles. Each level is visually stunning, makes expert use of color to set to the mood, and is filled with interesting details – even Alice's dress changes in each chapter to fit the theme. The game's cutscenes are also imaginative, staged as cardboard-cutout puppet theater. I really enjoyed seeing what each new chapter would bring and exploring the imaginative worlds of Wonderland. However, as a big fan of Carroll's books I have to say that I was a little disappointed that the Wonderland of the game pays only cursory deference to the Wonderland of the books. Some familiar characters are there, albeit in quite different form, but you don't necessarily feel that you're in Wonderland, even a twisted version of it. Plenty of imagination went into designing this world, it's just a different kind of imagination and that's just a tad disappointing.

Your adventures in Wonderland take the form of a platform game more so than an action game. There's a fair amount of fighting required, but the majority of your time will be spent jumping across chasms, riding up on vents of air, and flipping switches. If you like platform games, you'll appreciate how well the game's controls work. Alice is very responsive to your commands, and jumps are never missed due to imprecise or unresponsive controls. The camera, often a sore point in platform games, works very well and you're never forced to take blind jumps, Wonderland's dream-like environments are certainly reflected in the way Alice jumps. She effortlessly floats over long distances in a single jump, and can chain together double and even triple jumps. These jumps can be combined with a glide in which her skirt fills to ride the air and really extend the distance she can reach in a jump. And if you miss a jump, Alice doesn't so much as die as she disappears into a flock of blue butterflies that quickly disperse. I wouldn't say that the platforming in the game is so challenging that you'll see those butterflies annoyingly often, but when you do fail to make a jump the game puts you back to where you were before you attempted the jump; the game is pretty nice to its players in terms of not forcing them to replay whatever section of the game lies between the place they died and the last arbitrary checkpoint. 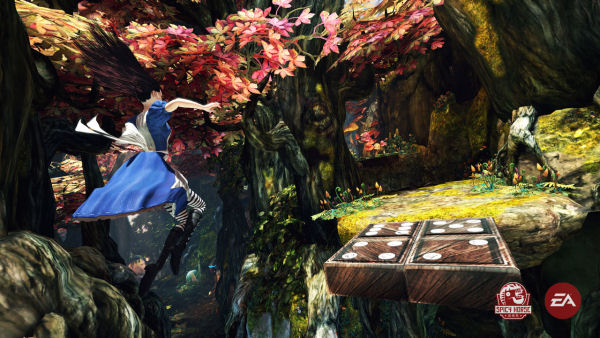 There are enemies in the game that you'll have to dispatch on your journey through Wonderland, but fighting is not a primary focus of the game and you'll spend less time battling enemies than you will in other endeavors. Alice has an odd arsenal of weapons at her disposal. Her primary weapon is the famed Vorpal Blade with which she can slice and dice her way through her enemies. Other weapons include a pepper grinder that acts as a ranged weapon, a hobby horse that can be used as a sledgehammer, and bombs that come in the form of a clockwork white rabbit. The dodge mechanic involves Alice temporarily dissolving into a flock of fast-moving butterflies and adds an additional fantastical aesthetic to the action. The enemies you'll face are an odd menagerie that for the most part has the thinnest of ties to the game's source material. Each has its own attack methods and weaknesses that you'll be able to decipher fairly quickly, and the biggest challenge in the game's battles comes from managing multiple enemies of different types attacking you all at once. Like the jumping controls, the fighting controls are smooth and responsive, and it's fun to watch Alice work her deadly magic.

The biggest problem with the game is that the majority of the gameplay draws from a limited bag of tricks. Once you've played the first bit of a new chapter, you've pretty much seen the mechanics and exercises that will be repeated throughout the level. Even though the levels are visually intriguing, after some time they feel like they drag on too long. The game attempts to make up for the eventual monotony of its gameplay by throwing in the occasional variation such as long ramp slides and 2D platform sequences, but none of these are particularly interesting or challenging. As you make your way through the game, you'll find yourself wishing as much imagination went into the gameplay as went into the level aesthetics.

As an added bonus (as long as you buy the game new), Madness Returns comes with a code to download the original American McGee's Alice game. The original game has undergone a facelift, but its origins as a PC shooter are evident in the way that the controls work and this will take a little getting used to. Otherwise, it's a great bonus to include with the game and those who are fans of the source material will appreciate how the original game stayed closer to its inspiration than Madness Returns.

Final Rating: 79%. If as much imagination had been applied to the gameplay that was put into the art design, Madness Returns would have been a phenomenal game.