Dungeon Siege III may be the third game in the series, but it’s the first to appear on consoles. In spite of its PC heritage, though, this hack-and-slash dungeon crawler is very much a console style game. In fact, in spite of its Dungeon Siege heritage this game doesn’t have a whole lot in common with its predecessors.

I can remember Dungeon Siege as being one of the first action-RPGs, or RPGs in general for that matter, to disavow character classes in favor of a system that used your play style to shape your character. For example, if you used bows a lot your character would become more and more efficient at archery, without the need to be classified as a hunter or similar class at the start of the game. Dungeon Siege III completely forgoes this philosophy, giving you the choice of one of four possible pre-rolled and skill-set-locked characters. Three are aligned with the typical RPG archetypes of a melee and a ranged fighter and a mage, with the fourth being a more unique hybrid with elemental powers and acrobatic melee skills. The limited choice offered to players is a consequence of the fact that Dungeon Siege III is far more story-focused than its predecessors. The four available characters each have an important role to play in the game’s story that goes far beyond the typical “anonymous adventurer saves the day” storyline (which is something that the first two games in the series served up for story). In fact, the game ventures a bit into BioWare territory, giving your character some choice in how he or she responds during conversations with NPCs and providing plenty of opportunities to read additional sources of lore that fill out the game’s world and its story. Conversation “wheels” allow you to make your own choices on how to respond to NPCs, and your choices do have a minor effect on the story. Not enough so to warrant multiple play-throughs, though; overall the game is pretty linear. But enough about how Dungeon Siege III is not Dungeon Siege or Dungeon Siege II, let’s leave it at that and spend the rest of our time together looking at the game as its own original action-RPG. 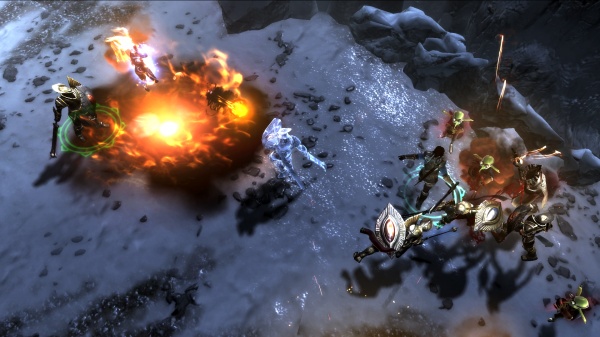 When you get down to it action-RPGs are really about two things: hack-n-slash fighting and loot. Let’s start with the hacking. Not surprisingly you’ll be making extensive use of the attack button, but Dungeon Siege II adds a bit more to the formula beyond pure button-mashing. First of all, each character has two fighting stances that you can switch between on the fly with a press of the left bumper. Each stance has its own set of attacks, so picking the right one in response to the current battle situation is a big part of the game. For example, in one stance the ranged character wields a rifle and can pick enemies off at long range. However, this is not an effective tactic when enemies press close, so it’s far better to switch to her other stance in which she wields dual shotguns. The shotguns do not do as much damage to enemies as a shot from the rifle, but they can hit multiple enemies at once and knock them back a bit to give you some breathing room.

Each character also gets a set of nine potential special abilities. Six are offensive and tied by threes to each stance, and three are defensive and available regardless of stance. As you level you’ll have the choice of spreading your upgrade points among all of these abilities or to spend those points making just a couple of them more powerful. In this way there’s some chance to customize each character to suit a particular play style, but in practice your choices won’t have a serious impact on the gameplay – it’s not like there’s enough leeway here with nine abilities for you to create new and unique hybrid classes in the game. The abilities are mapped to up to three of the face buttons (A is permanently dedicated to the default attack button), and holding the trigger will switch between the offensive and defensive abilities. Before you can use one, though, you’ll have to build “focus” through your basic attack, and when you do use one you’ll drain that focus.

The game likes to throw mobs of enemies at you and it’s easy to become quickly overwhelmed if you try to hold your ground against them. If you’re familiar with MMORPGs, you’ll feel right at home trying to manage crowd aggro and kiting enemies away from the mob. You also need to be careful not to get cornered, and not just for the obvious reason. When you’re backed up against a wall and mobbed by enemies the camera zooms in so closely you won’t be able to tell what’s going on, and unless you have a knockback ability that will allow you to try and blindly make a run for it you’re as good as dead when this happens. 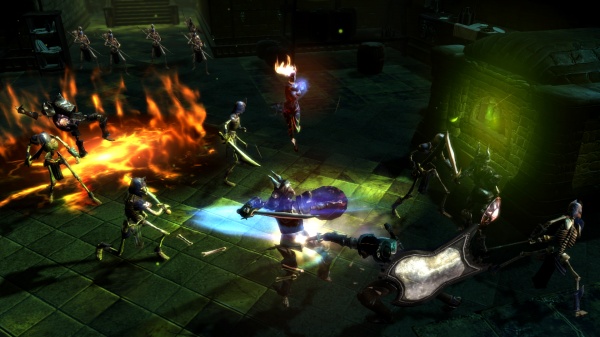 Loot is a big part of the fun in an action-RPG, and unfortunately the loot in Dungeon Siege III is simply disappointing. Each weapon, accessory, or piece of armor is tied to a specific character – you’ll even see a portrait of the character that can use a piece of loot superimposed on it when it drops – and each item of a particular type looks pretty much exactly like every other item of that type. When you go to equip something you’ll see some pluses and minuses indicating the stats affect by the equipment change, but that’s it; your character will look the same after you equip the new gear. Furthermore, outside of perhaps the armor rating and damage ratings, all those extra plusses and minuses don’t have any perceptible effect on the game.

As you make your way through the game you'll encounter the other three characters that you didn't select at the start.  They'll join up with you under AI control and do a relatively decent job of holding their own against your enemies.  You'll be able to select their equipment and their upgrades when they level up, but there's no mechanism for controlling their tactics or anything like that.  If you want a better partner, you can play two-player co-op.  It's not true co-op in the sense that it becomes a two-player RPG, but rather in that the second player takes over for the AI character.  Still two-player can certainly be more fun than single-player - as long as you can manage to stick close together to avoid camera issues.  If you go online you can increase the player count to four, with each player taking on one of the game's four unique characters.  Four player online play is a bit odd in that it's only the host that really has a character that will persist beyond the online session.  Other players are there just for the ride and once they exit will have nothing to show for their efforts.  And if you think you have camera issues with two players, wait until you try four...

Final Rating: 69%. A few too many problems to recommend to anyone but hardcore hack-and-slash fans, but even they're going to find the game's loot underwhelming.