The Gears franchise has built itself on its flawless cover system and fast-paced action. The story lacked punch in the first game and improved with the second game only slightly. The third and allegedly final installment of the series puts the story front and center and injects even more character and emotion than the first two games combined. With a refined multiplayer and a campaign that sports an amazing blend of storytelling and pacing, Gears of War 3 manages to improve upon the masterpiece it follows.

The story starts not too long after the events of Gears 2, with the COG forces making their living from a massive ship. Of course it doesn’t take long for the Locust and Lambent to poke their heads up to grief the remnants of humanity. You start the game as Marcus Fenix, the familiar protagonist, but after a few chapters you will switch over to Augustus Cole for the other point of view of what is happening as the separate squads solve the enormous fish monster problem. The most notable point in both halves of act 1, besides the use of the Silverback mech suit, is that both Marcus and Cole are haunted by memories of their past. These elements don’t help the current story, but they are small touches that help humanize all of the characters who up to this point have seemed less like people and more like stock characterizations. Of course the histories of Cole and Fenix aren’t explored for long and the game returns you to the body of Marcus for the rest of the game.

From there the story revs into high gear and you will be mowing down all shapes and sizes of Locust forces through tunnels, highways, abandoned cities, and through this game’s version of the “two towers” before reaching the final act of the game. This flurry of a pace makes the game easy to pick up and play for long tracks of time. The main game clocks in anywhere from 8-12 hours, but almost every moment of the game feels fresh and exciting as you are either killing enemies in a new way or at a new location. It helps that the environments look jaw dropping at times; leaving you with images you will remember, where the previous games may have blurred together and seemed indistinguishable due to the often-uninspired backdrops. The enemy factions attacking you often change, and without spoiling much just know that you fight almost every kind of enemy except robots. 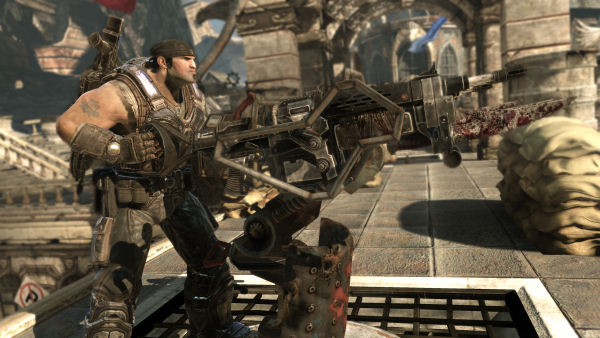 Perhaps the most surprising aspect of the story is that the dialogue is for the most part brilliant. The squad chirps at each other and are often witty and humorous without being overbearing. Every character seems to say something memorable and none of the stellar writing comes off as forced; it all flows naturally and compliments the action well. Having this high quality dialogue may have been a necessity as the game often pauses for moments of insights and cutscenes for the characters. In other words, you may not want to skip the dialogue on repeated play-throughs.

Fans of the series will be at home with the familiar gameplay mechanics, which are largely unchanged from Gears 1. The name of the game is to find cover and hit your action reloads. Over-the-shoulder camera angles have increased in use since the original Gears release, and by now every game of the same style will continue to borrow inspiration from this game. There are many new weapons, but none of them change the game, and while the Silverback suits provide a welcome breath for fresh air they quickly become a familiar sight in the ever-changing campaign. A subtle change may be that you are encouraged to constantly swap out smaller arms for bigger weapons, as the heftier Lambent and Locust types are fairly common – the stronger enemies covering every inch of the final acts.

Co-op provides an enormous amount of replayability for the campaign as you can now jump in with anyone’s game online. Since the campaign includes four squad mates throughout, you can imagine the insanity of four people bringing multiplayer tactics to the campaign. Horde mode returns where you can purchase defenses and buy weapons and ammo based on performance against waves of AI opponents similar to the zombie mode in Call of Duty; or flip to the bad guy’s side and play Beast mode to fend off human enemies. 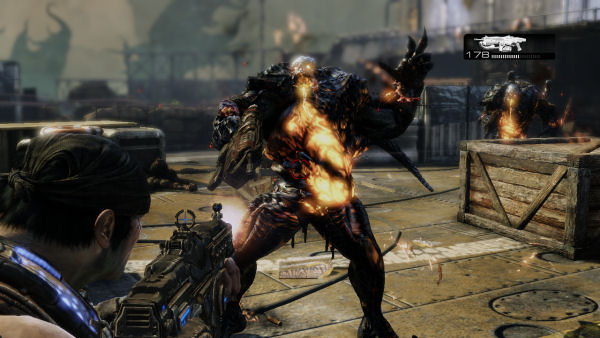 For head-to-head action you have returning modes as well as regular team deathmatch. Warzone and Execution are single-life per round contests; King of the Hill has you holding nodes; Capture the Leader has you holding the enemy leader and protecting yours; and Wingman has you paired with another as you face three other pairs. The maps reflect the beautiful and haunting set pieces from the campaign.

By now, every gamer should know that the Gears franchise will always sport the latest in graphics. The presentation (menus and navigation) is much more refined from Gears 2, and has successfully adopted a lobby and matchmaking system similar to Halo. The Gears 2 multiplayer may have scared away the un-initiated or seemed like a trial by fire, but in Gears 3 the multiplayer is much more inviting and easier to understand before you jump in. There is even a training mode against bots to help the un-initiated learn the differences in the casual single-player experience compared to the brutal nature of multiplayer.

You would need a good reason to say you missed or didn’t like Gears of War 2, but Gears of War 3 has few, if any, weak points. Maybe it caters a bit to the more casual gaming audience, but not to the extent of Gears 2. Unless you have taken an oath to reject violence in your entertainment, there is no reason to skip Gears of War 3 – it has everything you could ask from a shooter and does them all with first class polish. If the Gears franchise has come to an end, it goes out on top of its game.