I'll save you some time - if you have even a passing interest in platform or puzzle games and you have a Wii U, Teslagrad should be the very next game on your list. Though the game has been available on PC for some time, it has now found a new, and hopefully receptive audience on Nintendo's home console; this is the kind of game that others point to when they discuss truly transcendent design. From the flat-out astonishing opening sequence to the well thought out puzzles and clever (if not overly challenging) boss fights, Teslagrad is the kind of game that belongs in the same breath with modern classics like Braid and Fez. That is high praise, but once you witness what Teslagrad has to offer, I think you'll be inclined to enthusiastically agree.

Teslagrad starts out with a semi-minimalist opening sequence that simply must be experienced. There is no awkward tutorial here, no omniscient narrator explaining how to use the d-pad and B button. Instead, a group of goons burst through your door, kidnap your family and you take the role of the only one to escape, a young boy. As the goons chase you from rooftop to rooftop, a dismal, darkened city scrolls by in the background - words don't do justice to how much, and conversely, how little, this sequence tells you about the game ahead. The whole thing ends as you guide the boy into a castle and a drawbridge is raised, leaving the pursuers outside. It is a breathless chase and ranks up there with some of the most memorable openings in video gaming. Even if you put the controller down as the drawbridge goes up (trust me, you won't want to), you'll still have gotten your money's worth out of just this short opener. It really is that good. 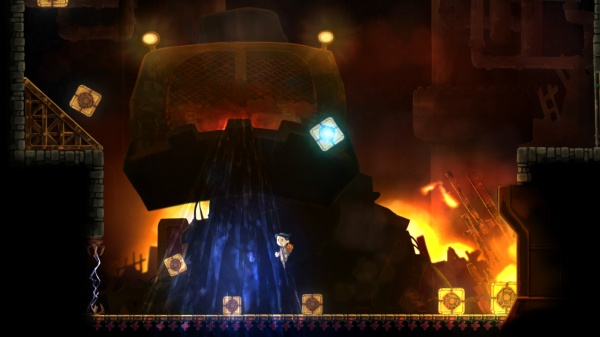 The game that follows is less about speed and action as it is careful jumping and some very devilish puzzles. Teslagrad has some Metroidvania-esque aspects to it as well, with once visited areas offering new paths and secrets as you acquire new powers and abilities. Mostly, though, you'll be solving puzzles with the game's main mechanic - magnets. You'll use the L trigger to control the blue colored magnets and the R trigger for red ones, and they will be used in all the ways you'd expect - attracting, repelling and the like. You'll also collect some very interesting items and skills along the way, including the cool ability to teleport across short distances. All of it serves as an end to fully exploring and conquering your environment, and the puzzles you'll need to solve are all very clever and endlessly entertaining to work through. And with the story slowly being told through background events (puppet shows - seriously), exploring and working through Teslagrad becomes an experience not only with great gameplay, but one with a deeply touching and involved story as well.

If I found one thing wrong with Teslagrad, it was the boss battles. Do not misread this - the boss battles are excellent and extremely fun to work out and overcome. The issue I had is that unless you are deeply immersed and committed to seeing the game through, it would be understandable to become frustrated enough to walk away. See, in this game, your character can take very little punishment - it's a "one hit, you're dead" rule in place here. While it isn't a problem for most of the game, it becomes slightly more annoying when challenging the bosses. If you die, you simply restart that room where you walked in with no penalty. During a puzzle sequence, it's no problem; just a quick little warp-type thing back to the beginning. During boss fights, the same thing happens, but you might get killed 10-20 times before you even begin to work out how beating the boss might be accomplished. As the game gets harder, it can be a little more irritating. My fight with one of the final baddies went like this: dead, dead, dead, dead, dead, maybe?, dead, dead, dead, dead, what if I...?, dead, dead, dead, ...got it, dead, dead, boss defeated. Like I said, I immensely enjoyed these fights, but constant dying with no clues, no help and no way around might be enough to turn some gamers off. Not me, but some gamers. 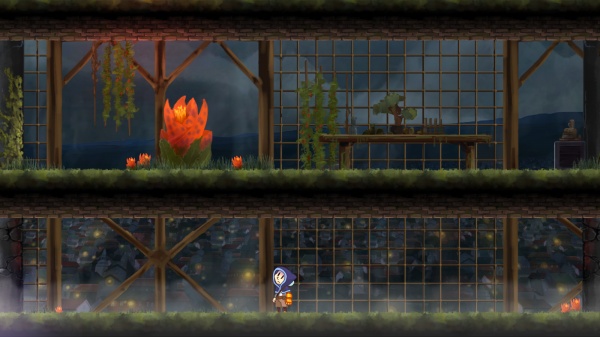 To say I absolutely loved Teslagrad is an understatement. This is a masterpiece of a game, and its one I'm sure will be played over and over on my Wii U. Other games this fall will dazzle with huge explosions and huger budgets, massive marketing campaigns and even more massive hype. That's fine, but games like Teslagrad are the reason most of us got into this hobby in the first place. It offers a great hook, a great opening sequence and some great gameplay and puzzles to work out. Beating the bosses can get on the annoying side, but the overall process of finishing them off is so rewarding that too many deaths rarely seem to matter in hindsight. If you have a Wii U (or a PC), Teslagrad is a game I can recommend with no hesitation.

Final Rating: 93%. A true masterpiece of a game.