Those who have read my reviews for any significant stretch of time know there are a few things I simply don't care for - multiplayer, especially online multiplayer, random encounters and television shows on DVD that aren't presented in full-season sets are among my three most harped upon dislikes. There are exceptions to every rule, and Frima Studio's Chariot, a downloadable eShop game on the Wii U, just happens to be one of those exceptions. Not only does the puzzle platformer outright demand you have a partner to play with, it actually makes it a fun, if sometimes a tad frustrating, experience, even for this staunchly single-player guy.

Chariot's setup is clever, but it really serves as a backdrop to the gameplay rather than a driving force. You play as a princess whose father, the king, has passed away. Upon bringing his body to the chosen final resting place, the king's ghost declares it an unfit place to stay for eternity. He demands a better tomb, with better jewels and riches to help his transition to the next life. So it becomes the princess' and her fiancï¿½'s job to drag his coffin around the catacombs, collecting jewels and ultimately finding a better place to put the king's body. By the way, the "Chariot" of the game's title is actually the king's coffin, strangely enough. It's a weird, morbid way to enter a game about co-op platforming and exploration, but it is handled in a light-hearted way and is certainly an original way to kick things off.

In keeping with the light-hearted tone, the graphics have a stylized, cel-shaded look to them that works extremely well. The color palette is muted and a little washed out-looking, but it fits the overall tone. The character and enemy animations are very well done, as is the not oft-heard but always effective background music, but the star is the gameplay. 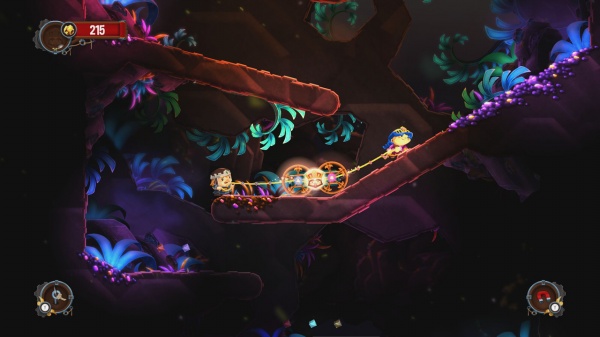 The basic hook of the gameplay isn't fighting enemies, though we will get to that in a minute, it is getting you, your partner and the "chariot" around these fairly large environments and collecting all the loot in site. This means using all kinds of gadgets - when playing co-op, each player can bring one into a level - to get not only from point A to point B, but also keep the chariot with you and collect as many treasures as possible. The game has about 25 levels that get progressively more difficult, but this game is meant to be enjoyed, not give you fits over extreme difficulty.

Which is where the promised discussion of enemies comes in. You'll do battle with the environment as often as you do any actual bad guys, but one villain in particular turned an enjoyable afternoon on the couch into a screaming, (almost) controller-throwing ordeal. Looters are bad guys who are attracted to any sound you may make when sneaking by them, and the bigger the treasure you have in tow, the more noise you are going to be making. The looters, if alerted, come and steal your hard-won treasures, and elicit groans every time you see them. You can swat them away by tossing rocks or using the princess' sword, but they don't fit with the flow of the exploration and having your jewels stolen is extremely frustrating, especially after difficult sequences. Everyone can think of a game with one flaw that warrants a sentence like, "X game would be great without Y" and the looters are definitely Chariot's "Y."

Chariot, as I said before, is a game that demands you have a partner to play with. It can be played by yourself, but as far as I could tell there are lots of areas and treasures that can only be reached when two people play as the princess and her fiancï¿½ in tandem. That's not to say the game can't be finished solo, but I'm fairly sure you can't say you've done and seen it all without having a trusty partner by your side (in this case, my wife, who was a big help as the fiancï¿½). Normally, I'd knock points off for forcing multiplayer on us lone wolf gamers, but Chariot's light fun and emphasis on teamwork made what could have been a major drag an easygoing cooperative endeavor. 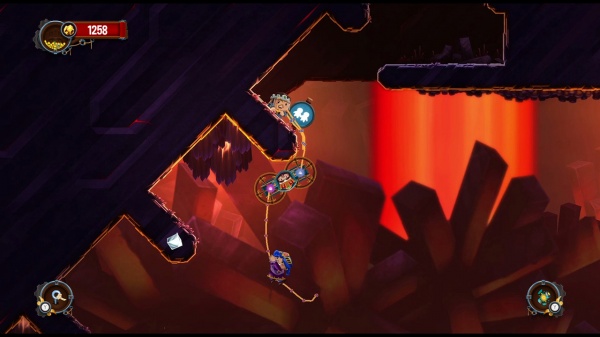 If I had one further, minor complaint, it is that the Gamepad is totally underused here. Some areas can be on the larger side and plenty confusing, especially when playing with a partner, and this game was tailor-made for a Gamepad map as a reference point. No dice. The Gamepad only shows exactly whet your TV screen does, which isn't bad but it isn't all that useful either. The map is such a no-brainer that I often glanced at the Gamepad full expecting to be able to chart my next move, only to be disappointed that no such functionality existed. It's not a major flaw or anything, but it is a huge missed opportunity.

My wife and I had a good amount of fun with Chariot. The co-op worked really well and the gameplay was almost always fun, but the looters and the lack of a decent Gamepad map did hurt things a little. Overall, if you have a friend and an afternoon to kill, you could do a whole lot worse than Chariot.