It's been some time since a marquee cross-platform shooter has been released on a Nintendo console (at least not in some stripped-down format), and they don't come much more marquee than Call of Duty games. First and foremost, Black Ops 2 on the Wii U is the real deal, a full-fledged version of the shooter complete with the full single player campaign, zombie mode, and the multiplayer gameplay the series is known for. Before playing through the Wii U version of the game I spent a lot of time putting together an extensive review of the game on the Xbox 360, and rather than trying to come with creative ways to repeat myself I'll refer you to that review which has extensive coverage of each of the game modes and can be found here (you can also read Jason's take on the game after playing the PS3 version here). I'll use this space to instead focus on the differences you'll find playing Black Ops 2 on the Wii U as opposed to the other consoles.

The most obvious difference is that the Wii U has the only version of Black Ops 2 that supports a tablet controller, primarily because the Wii U is the only console with a tablet controller. As far as the game's concerned, this means different things depending on which mode you're in. For Zombies mode and the single player campaign the tablet screen is not really used. You can bring up a help screen that shows the control layout, but that's about it. It would have been nice if you could have seen things like your current objective or your progress towards bonus goals on the second screen, but that's a missed opportunity here. Multiplayer mode makes better use of the second screen, giving you the mini map and access to your point streak awards. Of course, all of this information is already on the main screen and taking your eyes off of the action to glance down at the tablet screen can get you killed pretty quickly. You can also tweak your loadouts from the tablet, and being able to do so with a touch screen is a welcome addition to the game.

All modes do however support playing the game on the tablet controller itself, which has a certain coolness/wow factor to it and can be a lifesaver for couples who like to hang out in the living room together but don't share a love of gaming. Personally I like playing games on a big screen, so for me this was more of a novelty that wore off before too long.

Controlling a shooter with a controller the size of a large paperback does take a bit of getting used to, although the button configuration will be instantly familiar to anyone who's played Call of Duty in the past on another console. There is some confusion tied to Nintendo's insistence on using a "reversed" A-B, X-Y button layout which is partly the game's fault in this case. I like that while you're in a game Black Ops 2 the buttons are essentially mapped by position to match that on other consoles, but as soon as you pop out of the action there's the potential for a lot of errant button presses as the Wii U's A button, the far right one in its case, suddenly becomes the "confirm" button.

In spite of the Wii U's scarcity at the time of this writing, you can find a good number of people playing the multiplayer game online. There aren't as many as you'd find on any given night on PSN or Xbox Live, not by a longshot, but you can still get into a game relatively quickly as long as you stick to the more popular modes. The game's Boot Camp mode for beginners has grown sparse since the first wave of Wii U purchases, but I imagine that there will be plenty of new blood to fill out this mode come Christmas Day. Disappointingly there is no support for Call of Duty's Elite network, but that is probably due more to Nintendo's arcane notions of what makes for a good gaming network than to oversight on Treyarch's part. When you do jump into a game, you'll find that Black Ops 2 on the Wii U plays just as tight and fast as it does on other consoles, making the game as ever much the twitch shooter that you expect it to be. 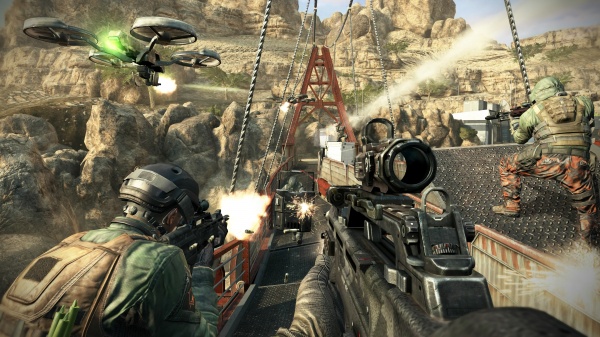 While the game looks pretty good on the Wii U, I have to admit that it's not quite up to the same quality levels as the PS3 and Xbox 360 versions in terms of graphics. Maybe it's the result of the porting process or that developers are too new to the Wii U to push its capabilities to the maximum, but after playing the game on multiple platforms I did notice that the difference is noticeable.

Overall, Black Ops 2 on the Wii U is easily recommendable. It proves that the Wii U can handle a modern top-tier shooter with ease, and is easily one of the best titles in the launch lineup. Unless you're buying a Wii U for the kiddies this year, you'll want to add Black Ops 2 to your new console's bundle.