Remember the Nintendo Wii U? I do, but only because I've sporadically flipped it on to scan new Skylanders toys into my collection. Other than that, the system has been all but ignored since I finished New Super Mario Bros. Wii U. I'm not alone; Wii U owners have had precious little to play, with the last major release being almost four months old. And, wouldn't you know it, the Wii U went from being an expensive paperweight to my most played system overnight. Why? Monster Hunter 3 Ultimate is why. The latest game in Capcom's huge-in-Japan series is finally available in the U.S., and everyone with a little hunter in their blood should start clearing their schedules now. This is the biggest and best Monster Hunter to date, and the saving grace for a new system that has all but lost its release window momentum.

Author's Note: Monster Hunter 3 Ultimate is also available for Nintendo's 3DS handheld. The games are nearly identical across both platforms, so this review will cover the two versions except where expressly noted otherwise.

So... after all that, I'm realizing that you may not be familiar with the Monster Hunter games at all. The basic premise is that players create a character from a decent number of options and are dropped into a hub town that serves as a home base for the remainder of the game. In this town, players will find a smattering of personalities, but each serves a distinct purpose. You have an armor/weapon merchant, an armor/weapon smithy, a complete and upgradable farm, a few other merchants, a guild counter and a town chief. Players accept assignments from the guild counter (and sometimes other people in town) choose their equipment and dive into huge landscapes with the accepted quest's goal or goals in mind. This can be killing or capturing a monster or monsters, gathering items or simply having a look around. Completing these tasks is part of a larger goal, however; your main drive is to scavenge what you can and use it to build that next set of armor or slightly better weapon. As the monsters get tougher, so must your gear and thus starts an unorthodox grind as you strive to bring down the game's most fearsome organisms. Monster Hunter is a style of RPG that certainly isn't for everyone, but those who love it wouldn't dream of spending any less than hundreds, if not thousands, of hours chasing the series' biggest beasts. 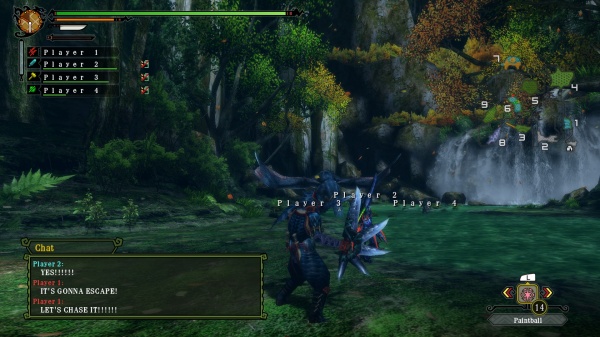 In the translation from Wii to Wii U/3DS, Monster Hunter 3 Ultimate's presentation has been amped up, but in a sort of scattershot way. When playing this game after the Wii version, it's extremely easy to pick out what received an overhaul and what didn't. Most, if not all, of the game's monsters have been polished up and look better here than they ever have before. The various environments have been cleaned up and augmented as well, with new effects and a much better draw distance and sense of scope. What didn't get much attention, it seems, are the NPCs and hub town. The NPCs are especially noticeable and look plucked directly from the previous version. The have blocky builds, blank facial expressions and stick out like a sore thumb. The town's lack of polish is less profound, but experienced Wii hunters will be able to spot the lack of spit shine immediately.

And while the sound remains the same as well, one unrelated presentation aspect will bug players across both versions. The text in Monster Hunter 3 Ultimate is microscopic and pushed to the very bottom left side of the screen. Since the spoken language of the game is about on par with Charlie Brown's teachers (no words, just noises), squinting becomes the best way to make out what the NPCs are actually saying. To be fair, most of the dialogue has no bearing on game progression whatsoever and will only hinder in certain activities and quests. Still, even with sharp displays and HD graphics, players will probably start skipping it altogether.

In past Monster Hunter games, much has been made of the series' camera woes. PSP players even invented "the claw," an extremely uncomfortable way of positioning one's hand to control movement (analog nub) and the camera (the d-pad) simultaneously. For this version, the problem is alleviated in two ways. First, the Wii U Gamepad and Pro controller both have twin analog sticks, so problem solved there. The 3DS is a bit trickier. Players can use the Circle Pad Pro to add that extra analog stick, or they can utilize an only slightly useful lock-on mechanism. The lock-on (it also works on the Wii U, but with the twin sticks it is useless) attaches to only the largest monsters and a tap of the L trigger swings the camera back to the beast in question. Personally, I found this to be more of a hassle than it was worth, and instead got used to tapping L to center the camera behind my hunter and ignoring the feature completely. There is also a way of using the 3DS touch screen to move the camera, but again, it just doesn't work like you'd want it to. Even with those annoyances, this is still the easiest to control Monster Hunter game I've yet played.

Though I'm a strictly solo hunter, let's talk about the on and offline multiplayer for a second. The 3DS only features local multiplayer for up to four friends in the same place, or it can be used through the Wii U console tunnel to get online that way. The Wii U features full online and offline multiplayer, which actually works pretty well. The coolest Wii U multiplayer feature, in my humble opinion is the ability for one player to use the Gamepad while up to three others control the on-screen action using their 3DS handhelds. Some will swear that the best part of this series is the multiplayer, and those folks will be more than happy with what the Wii U version has to offer. The 3DS is less impressive, but still offers a few different ways to play with friends. Solo hunters like myself may never get into this part of the game, but it is there and pretty good if you feel like giving it a try. 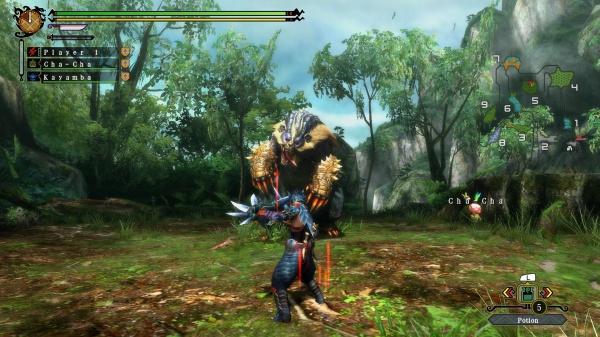 Before we finish up, let's talk about both games' enraging major misstep. In the weeks leading up to release, one of the most touted features was the cross-play functionality. This was said to allow players with both versions of the game to transfer their save file from the 3DS to the Wii U and vice versa. The television commercial for the game also included this as a major point, and a lot of serious hunters didn't think twice about buying two versions of essentially the same game. Cool, right? Ummm... not so much. The transferring of saves was to be facilitated by two free apps available in each system's respective eShop. When the game launched, people began searching for the apps to no avail. Huh? What happened? No one knows, it seems. People who began the game on the Wii U spent upwards of $40 extra dollars on the 3DS version, a game rendered unplayable by not wanting to lose progress jumping from one system to the other. If reviewers can dock the recent SimCity for its DRM debacle, I can dock Monster Hunter for not delivering on what some would call its best feature. Minus four points from Gryffind... I mean Monster Hunter.

...oh, if you are reading this review and the apps are available on the eShops, disregard that last bit. But, since the score took a hit, imagine what it must have been like to bring home two games and only get the ability to play one of them. Annoying, and that is a universal annoyance. If I bought the amazing new Tomb Raider game and Luigi's Manison: Dark Moon only to arrive home and find out one of them couldn't be played for a few days, I'd be just as cheesed off as so many are about the bungled save data transfer. Wouldn't you be as well?

I don't think it is any secret that Monster Hunter is one of my favorite gaming franchises, and Monster Hunter 3 Ultimate is hands-down the absolute best Monster Hunter yet. There are literally hundreds of hours of stuff to do in this game, and the upgrades from Monster Hunter Tri make this an even more tantalizing treat. The upscaled monster visuals make a thrilling hunt 10 times more exciting and the online play will appeal directly to a huge contingent of fans. It kills me to dock the game's score because of a disaster that has little to do with the game itself, but when I sit down to play a game, it better damn well keep the promises it has made. Imagine Super Mario Bros. without the fire flower and you'll understand how crucial the cross-play was to fans and how unforgivable it was not to have it ready at launch, or better yet, on the disc (or cart) itself! Though it isn't for all tastes, Monster Hunter 3 Ultimate is a near-masterpiece and easily among the best games on both the 3DS and Wii U.

Final Rating: 88%. It is indeed the ultimate Monster Hunter...