Author's Note: In reviewing Shovel Knight, I tested the game on all three Sony platforms. It is identical across all three versions, so the review applies to the PS3, PS4 and PS Vita versions as a single game.

As is the case with a lot of third-party Nintendo exclusives, Yacht Club Games' Shovel Knight has gone multiplatform, now appearing on Sony's family of systems in addition to the Wii U, 3DS and PC platforms. Whether this is a good thing ("more people get to play") or a bad thing ("Nintendo always loses exclusives") will be debated by message board trolls until the end of time, but the bottom line is that Shovel Knight is a great freaking game. It was great on the Wii U, PC and 3DS, and it is just as great on its new home, the Sony platforms. There is a dash of new content for this release, but not enough to make a double dip worth it on those merits. But let's be honest; you may want to double dip and buy again anyway. The game is that good, and Sony fans are in for a treat.

As is the case with most 8- and 16-bit games, the story in Shovel Knight isn't going to be its main selling point. The hero, Shovel Knight, and his weapon, the Shovelblade, have two goals: save the girl and beat the Enchantress. It doesn't get more 8-bit than that, right? Adding a layer to the story are The Order of No Quarter, a team of colorful bad guys who serve as boss fights through Shovel Knight's adventure. Let me be clear here - you won't remember these enemies' names, you probably won't even remember the game's plot once you've run through it, but it doesn't matter. What you won't forget, though, is how much fun you had with the well-designed fights and stages. You know, kind of like those NES and SNES games you loved. What was the plot of DuckTales (NES)? How about Mega Man 3 (NES)? Do you remember every antagonist's name in Super Mario World (SNES) or Donkey Kong Country (SNES)? Those unforgettable titles are as such because of the gameplay, and Shovel Knight embraces and capitalizes on the "feel" of those early days of gaming without letting a complicated story stand in the way. 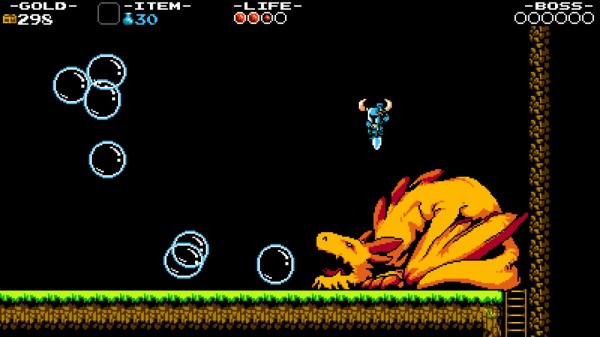 The game's presentation absolutely nails that aesthetic. The overworld map could be ripped right from Super Mario Bros. 3. The levels look like B-sides from the "stages we made but never used" Mega Man collection. Even Shovel Knight's weapon, with an ever-expanding list of functions, calls to mind the power ups and tools of the days of yore. The sprites here are extremely well-animated and colorful, and the game never experiences even a hint of slowdown, even with major action on-screen. And the music; oh, the music. Shovel Knight's score is a chiptune masterpiece, seriously rivaling Mega Man 2's soundtrack as the best I've ever heard (and that is saying something; Wood Man's theme has long been my favorite gaming music of all time and is still, years and years later, my main ringtone). If Shovel Knight had been released in the era is clearly draws inspiration from, it would have been regarded as the best-looking, best-sounding game of all time.

I keep talking about the gameplay, so let's finally get down to brass tacks. Shovel Knight plays like a dream. It takes all the stuff we loved about games back then, smashes it all together and molds it into an experience that is benefited by the developer's obvious love of the era and rounded out with the hindsight of what worked and what didn't in those early gaming years. You could write that off as a fancy way of saying "derivative," but Shovel Knight is anything but. You'll be running and jumping, fighting bosses and tricky terrain, just like the old days, but it never feels stale or played out. Instead, mastering these levels is like catching up with an old friend - they remind you why you got into this hobby in the first place.

What is most impressive about Shovel Knight's gameplay and systems is how it takes ideas from the post 8- and 16-bit era and makes them work in context. The Metroidvania device of requiring new power ups to revisit old areas works just as well here in individual stages as it does with a giant, interconnected world. The money/upgrade system is robust; you'll pick up gems around every corner but will still have lots of choices to make when upgrading gear and stats. These are just two examples of "new is old is new again" in the gameplay; expect to run across things like these pretty regularly as you play through the adventure. 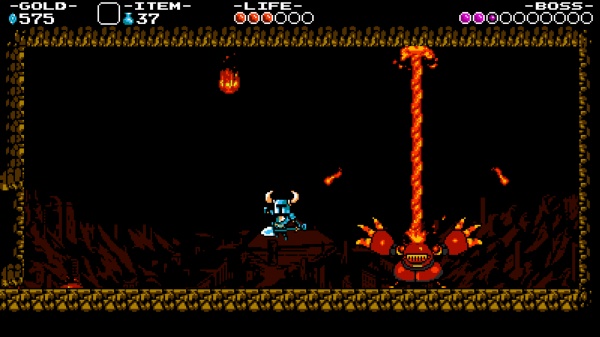 The last two things I wanted to briefly bring up were the boss fights and the secrets. As you might expect, the boss fights in Shovel Knight are clever, creative, challenging and nearly unforgettable. I found the last boss to be slightly more annoying than fun, but The Order of No Quarter battles are tense affairs that require skill, timing and memorization. I won't say another word about bosses because I'd hate to ruin the surprises, but rest assured you will adore these fights.

Finally, let's touch on the game's secrets. If you ever read a copy of Nintendo Power and thought "How would anyone have figured out that secret on their own?" then you know how tough some of these secrets can be to unearth. This stirs the nostalgia pot but most of us forgot how frustrating looking for stuff that may or may not exist and may or may not have a coherent way to access actually was, so out of the way secrets became as annoying as they were rewarding.

And speaking of secrets, let's wrap with the exclusive added content for Sony systems - the God of War himself, Kratos. Appearing as an optional boss and dropping a piece for a special weapon, Kratos is probably the best-hidden secret in a game of well-hidden secrets. Requiring the player to clear the Hall of Champions and find a secret scroll, getting Kratos to show up is no easy task. His fight, though, is a two-parter that feels easier than it should be. When defeated, Kratos drops a piece used to construct a weapon very similar to his Blades of Fate. It's a cool Easter Egg, but neither the weapon or the battle itself are all that thrilling. 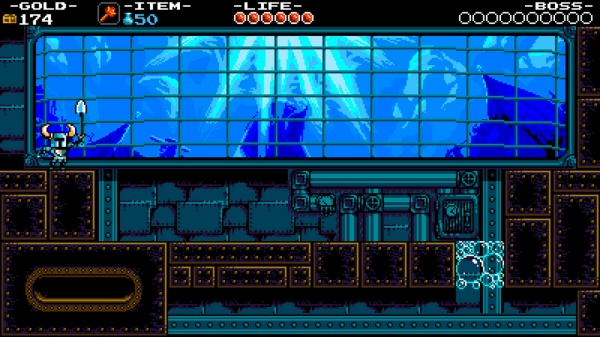 I'll be 100 percent honest; when the assignment of the PlayStation Shovel Knight release came down, I wasn't overly excited. I'd already played and finished the game - twice - on my 3DS. But, back then, I distinctly remember thinking that I wished I was reviewing the game, rather than just playing for pleasure. So I took on the review. Guess what? My third and fourth play-throughs (PS4 and Vita mostly) were every bit as fun and challenging as my first two, and the little extra for the Sony release was a nice little cherry on top. So what makes this game you've heard so much about so great? Why, with active play-throughs of Monster Hunter 4 Ultimate, Xenoblade Chronicles 3D, Mother 3 and Dragonball Xenoverse all going right now, would I be so thrilled to pause and spend time with a game I'd beaten and re-beaten? Shovel Knight is basically the perfect marriage of old and new, with a retro look and feel but featuring lessons learned from the 8- and 16-bit eras. It feels nostalgic and fresh at the same time, it's challenging without being a nightmare and playing through it reminds of a simpler time, when you'd sit down with a game and just have a blast playing. Shovel Knight, like the Darksiders games (two other personal all-time favorites), feels like a game made by people who deeply love and understand video games. And they've used that love to create one of the very best games we've seen in quite some time.