Mention Earthbound in a description of any video game and people (myself included) will go nuts. The classic Super Nintendo RPG pulled the genre from fantasy to reality, with exotic landscapes and destinations replaced by mundane, real-world cities and towns; a world that more resembled ours than it did any fictional location. Believe it or not, this unorthodox approach really resonated with fans and still does to this day. Taking a page from the real-world book, Atlus' new Citizens of Earth has a very Earthbound feel, but doesn't quite reach the lofty ideas put forth in the classic it mimics. Still, there is a good old school RPG here, and the game's humor bridges the gap from forgettable to memorable.

Citizens of Earth casts you as Vice President of Earth, just a day after winning his election. Still living at home with mom and brother, of course, you wake up for your first day on the job and immediately recruit both family members to help you with a mass of protestors outside. This is the basis for the entire game; you recruit various citizens, all of whom have a special ability or skill, to help you progress and win battles. You can only have a team of three citizens at a time, so there is some strategy as to which citizens you have in tow and which you leave for later events. Getting these people on your team isn't just a matter of asking them; all citizens require you to do a special task before they will join up. These can range from entertaining to downright frustrating, though completionists like myself won't bat an eye when it comes to recruiting everyone and doing everything. 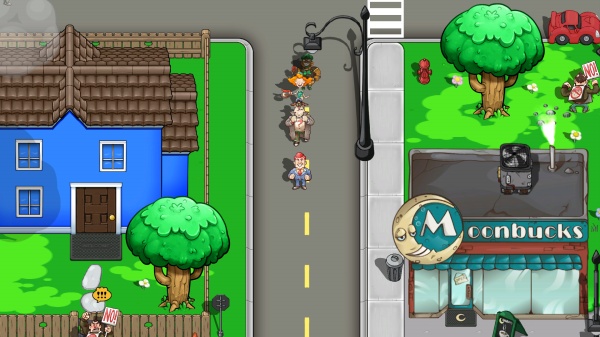 Once recruited, citizens level up just like normal RPG team members, with the main difference being you - the Vice President never lifts a finger in battle. All the fighting is done by your team (a typical politician with a hands-off approach), and collecting these citizens and adapting to changing conditions through party selection is the meat of the game. And this would be fantastic, but the battle system does leave a little to be desired.

Fights take place in old school semi-first person view, with the enemy or enemies on screen directly in front of you and your menus and attacks at the bottom. Games like SMT: Devil Survivor, SMT IV, Etrian Odyssey, Dragon Quest and the recent Persona Q prove that first-person battles can be anything but dull, but the ones in Citizens of Earth don't have the same spark those games enjoy. You'll fight the same enemies over and over (without random encounters - the game deserves unending praise for this design decision alone) and even when you are switching team members on a constant basis, the fights can feel formulaic and grindy. I will say that the closer you get to the end of the game, the tougher the fights become and some of these can be real nail-biters, but I definitely wasn't as excited about fighting as I was exploration or the often-hilarious script.

My enjoyment of Citizens of Earth came more from the environments and characters than it did from the normal RPG hooks like a deep, twisting story or a complicated, rewarding battle system. Every social stereotype is portrayed hilariously at some point or another, and the game is smashed full of cute pop culture references and wink, wink, nudge, nudge humor. Following the Vice President's exploits always eclipses any of the tedium inspired by the blah battle system, and the story, though goofy, is one I found myself actually invested in. You aren't fighting for the fate of the world here (or are you?), but the story is as engaging as any I've played recently. And the game is actually funny. Nothing sucks more than when games try to be funny and fail, inducing groans from those of us who are jaded with decades of poop and fart jokes, but the humor here is self-aware and intelligent. Shying away from random encounters and the actually funny script alone make Citizens of Earth worth looking into. 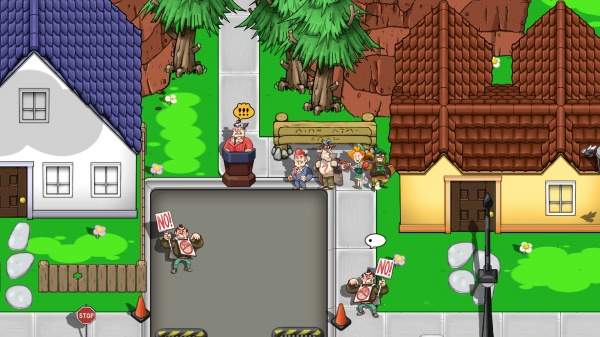 The somewhat meh battle system isn't my main complaint with this one, but it is a substantial one. I honestly had a bigger problem with something else - the graphics. Huh? Jason NEVER cuts points for graphics! I have to here, as the Vita's screen resolution confirms that this is, like a lot of games previous, not a port of the version from consoles. This is a port of the 3DS game (the games are the same across all platforms, the graphical fidelity is not) and parts of it look fuzzy and out of focus. If you've played a recent LEGO game on the Vita, you know what I'm talking about here. The ever-present portrait of Mr. Vice President is where you'll see this best; it is almost always on the lower left hand corner of the screen and it is noticeably low res and blurry. This doesn't really affect the game in any way, but Vita players will notice immediately that the title looks a lot less sharp than it should.

I knew right away that Citizens of Earth was a game I was going to like. The Earthbound comparisons, a genuinely funny script and social commentary coupled with old school RPG mechanics... it's like the developers made this one just for me. And I enjoyed the hell out of my 27+ hour quest (I could have finished in under 20 hours, but that completionist part of me kept me collecting). I won't come right out and recommend the game to everyone, as new school RPG fans and action gamers probably won't find much to enjoy with this one. But for the right sensibilities, Citizens of Earth is a great RPG at a budget price, and a rare bright spot in a season usually barren of any decent releases.