Atelier Rorona Plus: The Alchemist Of Arland Review

Being a PlayStation Vita owner means trying new things. The general lack of compelling games on the handheld is what prompted me to blindly purchase Atelier Totori: The Adventurer of Arland when it launched last year, and I ended up loving it, a game I would not have glanced at twice had there been anything else of note to play on Sony's struggling handheld. Since then, Atelier Meruru and now Atelier Rorona, the three games of the Arland trilogy, have also come to the Vita, with Rorona being the final and most polished release (more on that trilogy thing in a minute - it gets really confusing). All you really need to know going in is that if you've ever had even a passing curiosity about time/resource management mechanics in your RPGs, then chances are that you'll enjoy Atelier Rorona (and Totori and Meruru) as much as I have.

I promised an explanation of the very confusing Arland trilogy before we got started so here it is. The three games in this trilogy were released way out of order here in the states, with the second game, Totori, releasing first. The third game, Meruru, came next, and the final release, Rorona, is actually the first game in the trilogy. So if you've been following these games since Totori, as I have, you'll have played the trilogy out of order. If you are new, you can play them in order BUT there have been little bonuses and extra stuff worked in accommodate the wacky release chronology. My recommendation? Start with Rorona, then Totori, then Meruru. These games have some serious charm to them, and seeing the Arland story play out in the correct chronological order is something I'm seriously considering (re)doing myself, despite the fact that these three games require 40+ hours a piece and multiple playthroughs to earn the best items and endings. 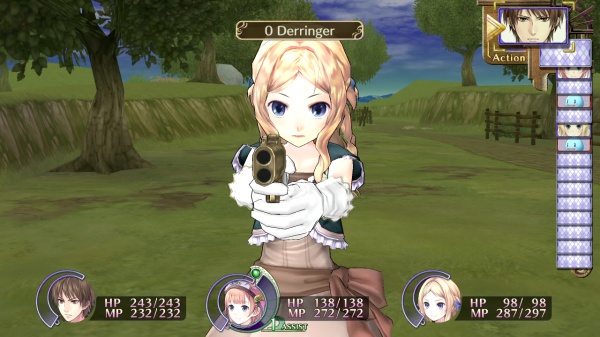 Whew! We can finally get to the review! Let's kick off with the story. Atelier Rorona tells the tale of Rorona (duh), a young alchemist in the kingdom of Arland. Due to her teacher, Astrid, who is all at once lazy, brash and a little pervy, the government decides to shut down their atelier (French for laboratory/workshop, basically) unless Astrid and Rorona can complete certain tasks and prove worthy enough to remain in business. Of course, Astrid chooses to leave it all up to inexperienced Rorona, so she must complete the tasks on her own, though she does have a few friends who can help along the way. This means exploring the kingdom, finding and synthesizing alchemy ingredients, fighting monsters and managing the time it takes to do all these things to keep up with your governmental deadlines. It's a fun story with mostly cutesy, feminine anime stereotypes, but these characters and their lives do have an undeniable whimsy, and if you like them, you have two more full games that follow their adventures. Unlike a lot of RPGs, though, the time management and alchemy gameplay are far, far more important than the story, so if the lighthearted story isn't your thing, there is still a lot to like about the game.

Like I said, you'll spend most of your time in Arland either gathering ingredients for or making alchemy recipes. You'll be making nearly everything you'll use in the game, from limited use weapons like bombs or cannons, to new equipment, to food to ingredients and everything in between. Each recipe requires a certain amount of MP and time to perfect, so you'll need to watch your calendar and your MP to keep yourself growing as an alchemist. The game would be pretty boring if all you did was raise your levels as an alchemist, so to keep things moving, you'll have not just the main government contracts to fill, but also smaller missions to help pad your wallet and experience level. These can be anything from knocking out a certain number of a certain monster, or delivering a certain ingredient or even making a few items in the lab. These smaller quests are always available and always circulating, so even if you choose not to do some of them, more are always waiting to pop up. 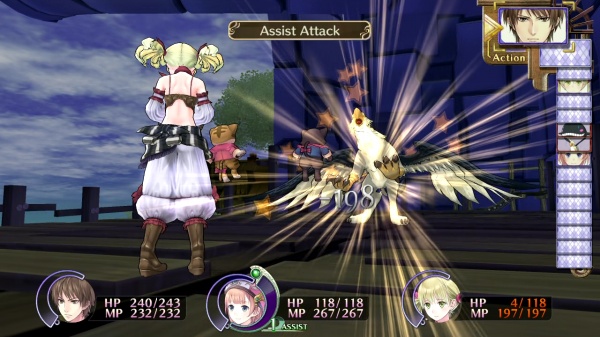 After a few hours with the game, you'll see how Atelier Rorona has less in common with your average RPG and more in common with time/resource management sims than you may have originally thought. Your government contracts MUST be completed in the three months you are allotted or it is game over, and the smaller contracts all have time limits, too. You need to plan your trips out to the field and your time in the lab accordingly; if you have 10 days left on a contract and it takes three to get to the area with the necessary ingredients and three to get back, you had better make sure it takes less than four to make and deliver or your contract is forfeited and it isn't worth the time spent anyway. With the main government contract's time always ticking away, and up to 5-7 other contracts at a time (not to mention bonus requirements on the government contract that grant stat boosts, items, cash, etc.), it can be a lot to juggle. Once you get into the swing of things, though, it becomes as addicting as any game I've ever attached that word to; I was halfway through year three in the game when I looked at the clock - 3:00 am Monday morning and I had to be at work in four hours. "One more contract," I said (I didn't end up putting it down until about 5 am, getting me a total of about 45 minutes sleep before an eight hour workday).

The other part of your time, though not nearly as much spent gathering and synthesizing, is in battle. Battles play out like every other turn-based RPG you've ever played. You have three people on your team and everyone has standard and special attacks, defense move and a flee command. You are able to chain some attacks with others and Rorona can use items she synthesizes to make even the most insurmountable enemies seem easy. It's all pretty standard, but what is nice is that unlike Totori, Rorona is no shrinking violet. Atelier Totori had the same battle system, but Totori herself was a much weaker character, both in battle and in the game's story. Rorona was constantly my toughest damage dealer in fights, and I appreciated the character more for it. I realize it is a little weird to be talking about the main character in this game's sequel in the past tense, but remember, a lot of us played these games in the wrong order due to that bizarre release schedule. 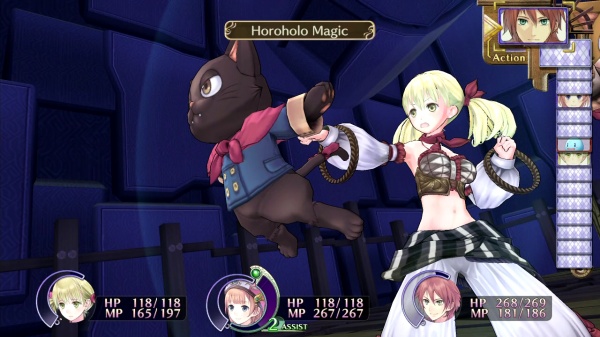 The one other thing I should mention doesn't really fit into any part of what I've written so far, so I'll just plop it right here. This game, like the other two, features dual audio, meaning you can play it with either Japanese or English voices. I prefer Japanese as it seems to fit the tone a little better, but it's a personal preference. Also, I feel I should mention that if you do plan on playing through the other Arland games on the Vita (or have already done so), make sure they are installed when you start Atelier Rorona. You get two special clothing items if the game detects them on your system, and both Totori and Meruru grant bonuses when you start them as well. Since these are digital only games, you'll need quite a memory card to keep all three installed (they are about 3GB apiece), but it's worth it (and not just for these games - go 64GB, you won't be sorry).

I don't think there is any doubt that I really, really enjoyed not just my time with Atelier Rorona, but all three games in the Arland trilogy. The game is like a watercolor dream that hides a devious, addicting time management sim just under its soft veneer, and its feminine, whimsical appearance only adds to the experience - but not until you allow the game to show you just what a great experience it is. It's unfair to pigeonhole these games as niche ones simply because of their appearance; there is a lot of RPG goodness to absorb in these games. While Vita's Persona 4 Golden fanbase and acclaim is beyond huge, I think Sony's portable system just found its second best RPG experience in the outstanding Atelier Rorona (and by extension, Totori and Meruru).

Final Rating: 93%. So much more than just a pretty face.