Gunslugs is not a new game. It first popped up on iOS and Android devices last year, and now it has been brought to the PlayStation Vita. That leaves me with this question: Why doesn't this happen more often? The Vita is (arguably) still hurting in the game department, and there are some amazing iOS games that would become even better with the luxury of physical buttons. Combo Crew? Oceanhorn: Monster of Uncharted Seas? League of Evil? Horn? Great iOS games one and all. Someone please make this happen! But back to Gunslugs - this randomly generated side scrolling shooter feels more at home on the Vita than it ever did on the iPhone or iPad, and the price makes it a must buy for any Vita fan looking for a little retro action.

Gunslugs proves that sometimes less is more, and that theme really carries across all aspects of the title. The plot is that the Black Duck Army is waging war, so it is up to you, one of a handful of unlockable and playable characters, to spray bullets, bring down buildings and evac (as bad as I wanted to make the tired "Get To Da Choppa!" reference, I held back). That's all the motivation you really need. Also, points to the developers for making the birds the bad guys this time around. I think we have all had our fill of bird protagonists, be they Angry, Flappy or Tiny. 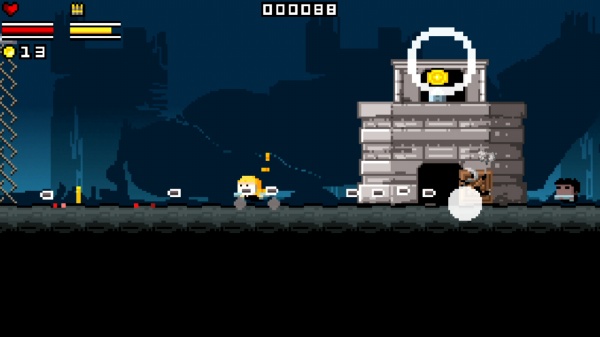 The game looks and sounds like a retro throwback, with large pixels and some surprisingly decent chiptune background music. It also supports some very chaotic scenes with absolutely no slowdown, which is nice. By now, you've no doubt seen hundreds of graphically old school games. This will match any of those on the graphics and sound; no more, no less.

While the gameplay on smartphones and tablets was pretty good, virtual buttons hindered the experience (as they do 99.999 percent of the time). With actual buttons, Gunslugs becomes the game it clearly wanted to be in the first place - a tough side scrolling shooter with randomly generated levels and plenty of action. If you remember Contra on the NES as warmly as I do, you'll find a lot to love here. Like Contra, it's all about blasting them before they blast you, boss fights and all sorts of weapon power-ups. The random generation of levels is also a big plus; you may play levels that are similar, but you'll never see a level repeated verbatim.

Even better, Gunslugs will probably keep its fans busy for longer than your average smartphone game. There are unlockable characters and high scores to chase, and online leaderboards - something I usually despise - are expertly handled. Unlike so many modern titles, you actually get a score for playing well, and comparing it to others' is a neat diversion.

Some console/handheld gamers act like smartphone gaming is all four horsemen of the apocalypse rolled into one, and it's no secret that more people are playing on their devices than ever before. This new video game battleground will see conflict for years to come, but if quality smartphone games make their way to dedicated handhelds, I say all the better. Gunslugs is a perfect example of the importance of buttons, especially in fast paced titles, and illustrates that good iOS games can become great with just a simple port to a real gaming machine. Though a little more expensive on the PSN than in the App Store, Gunslugs is a steal at $2.49. Give it a shot.

Final Rating: 88%. A good mobile game gets even better with buttons.