When I started playing Ninja Gaiden Sigma 2 Plus on the PlayStation Vita, it was by no means my first experience with the game. Like many Ryu Hayabusa fans out there, I have played the game at its core - Ninja Gaiden 2 - many times before. I played it new on the Xbox 360. I played it again as Ninja Gaiden Sigma 2 on the PS3. And I've just finished playing it a third time as Ninja Gaiden Sigma 2 Plus on the Vita. Heck, I even wrote an entire FAQ/walkthrough for the PS3 version of the game! With those credentials, I don't feel like it is a stretch to self-apply the title of "authority" on this game, do you? Either way, this is my favorite version of Ryu Hayabusa's second modern title, despite a few notable shortcomings, and it's an easily recommendable action game to those who can deal with a few annoyances and more than a lion's share of bloodspray.

In case you've been in the dark for a few decades, the Ninja Gaiden series has always been about two things: our previously mentioned star ninja Ryu and some seriously punishing difficulty. One of my first NES games was the original Ninja Gaiden, then an arcade port/remake that far outshone its original coin-op iteration, and I still remember afternoons of controller-throwing rage directed at the side-scroller. Even now, as the game has recently become available for download on the 3DS Virtual Console, I still marvel that grade school me was somehow able to overcome and complete that beast. Anyway, when the series made its "modern" (Xbox) debut, the main character and the punishing difficulty were the two things that carried over through the intervening years and the transition to 3D. Ninja Gaiden 2 (Xbox 360) scaled back the difficulty a bit, but kept Ryu firmly in the lead role... well, the game was still difficult, but for the wrong reasons. Slowdown marred the ultra fast battles and a camera from hell made following the action difficult, nearly impossible in some places. The Sigma update/port for the PS3 fixed most of the camera issues, but scaled back the buckets of blood and dismembered limbs seen in the 360 version. It also suffered from some of the same slowdown in key moments, but it was much easier to deal with than in the 360's original version.

Which brings us to Ninja Gaiden Sigma 2 Plus. This version pours all the gore seen on the 360 back into the mix and further deals with some of the slowdown, especially in one key battle. The tradeoff is that this version only runs at 30 fps, rather than the console versions' 60 fps. I also ran across some instances of dropped textures and pixelized edges, but absolutely none of it is game breaking stuff. I'm willing to give even more of a pass on this because the game's most vexing boss fight, against an electric fish in the sewers, is easiest to digest in this version. The 360 version's camera made the fight almost unwinnable, and the slowdown in the PS3 version chipped my life bar down far more than any of that jerk boss' attacks ever did. Both are totally fixed in this version. Now, a qualifier; if none of that stuff about pixelization or fps registered with you, or you never played the console version(s), please ignore this paragraph and move to the next. For you, all that is needed to be understood is the game looks great on Sony's handheld almost 100 percent of time. For vets, you'll see a game that isn't quite as pretty as the PS3 version, yet still outstrips most of the other Vita titles currently on the market. 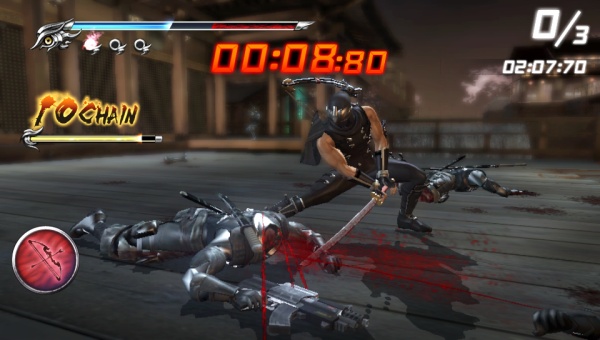 So this new version both succeeds and fails in the visuals department, but everything else is as great as you'd expect with a name like Ninja Gaiden on the box. The controls are spot-on, the action is fierce, even more so than the original Ninja Gaiden (Sigma Plus) and the boss battles are every bit as massive and challenging, with precise memorization required to make it through. Though, as I mentioned before, the challenge is somewhat downgraded from the previous game. You won't be saving essence to purchase badly needed weapon upgrades; instead, weapons get auto-upgrades as you uncover new locations. Rank and file enemies aren't as threatening as they were previously, and Ryu can feel a little overpowered as he nears this adventure's conclusion. If you had nightmares about the red dinos or triceratops soldiers in the previous game, you won't find any equally oppressive baddies here, outside of those boss battles, of course. Still, the game flows nicely even without the teeth-grinding difficulty, and with the slowdown and camera better than they've ever been, even the unfairly difficult sequences feel more doable.

As with the previous Sigma and Sigma Plus titles, a few things have been added in since the vanilla version. You'll get the PS3's insert levels, in which you'll play as Rachel and Ayane, two of the female protagonists only seen in cutscenes on the 360. You'll also get some strangely controlled co-op stuff and timed challenges, two options best ignored. Neither worked before and they still feel out of place, perhaps even moreso by today's standards. On the other side of the coin, the few puzzles found in the vanilla version have also been cut. This is for the better; they never jived well with the overall game and even series purists won't miss them one bit.

For me, this version is as good as Ninja Gaiden 2 is going to get. Small additions and removals streamline the experience, and the gameplay and bosses make overlooking the flaws easy enough. Granted, the game is beginning to show its age, especially in the face of more sophisticated brawlers like Metal Gear Rising, Bayonetta and the like, but this is still the best ninja action the Vita has to offer.

Final Rating: 79%. About as good as Ninja Gaiden Sigma is going to get.