Dead or Alive 5 Plus Review

What can you really say about Dead or Alive that hasn't been said before? The fighting game series originally made a splash because of its physics... you know what I'm talking about. The kids don't know, but you know. The Dead or Alive ladies, um, "ladies," we'll call them, have bounced and jiggled their way into the fighting game hall of fame, and even inspired some rather insipid spin-offs in the form of beach volleyball simulators, I mean G-rated porn. No, I was right the first time. Behind all the bouncing, though, the Dead or Alive fighters were actually pretty good, and have developed a serious fanbase around the world. Dead or Alive 5 has been available on the PS3 and Xbox 360 for a little while now, and the series is just making the jump to the PlayStation Vita in the form of Dead or Alive 5+. Does this game bring more than jiggle to the table? Or is it just another outlet for those not yet old enough for Playboy?

At the expense of you perhaps not finishing this review, I'll tell you what you want to know right off the bat: Yes, you can use the touch screen in the pervy way you always wanted to. Change the "boob physics (seriously)" to DOA in the options menu and go wild. Sheesh. 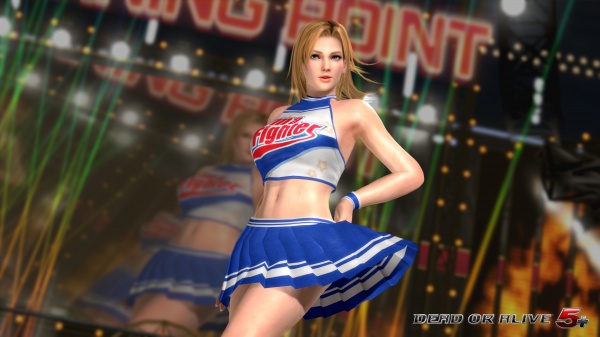 Ok, back to business. What Tecmo has done here is pretty impressive. The handheld version of Dead or Alive 5 is almost an exact copy of the console title, with only a handful of concessions made. In place of the console versions' 2x2 battles, Vita players get a "touch battle" mode that, well, sucks. But everything else is exactly on par with what the console version, right down to the impressive water effects (sweat never looked so good!) and semi-destructible environments. So this means you get all the modes and ways to play that most fighting games offer these days. You get a story mode, an arcade mode, plenty of online options, tons of unlockables and even a tidal wave of DLC, most of which seems to be new costumes and the like, at least judging from what is available right now. The game is so close to a carbon copy of its console predecessors that it would be tough for me to make a call on whether or not those who already own it should go for the portable version. Being a near-perfect port has its ups and downs, I guess.

With that ambiguous "already got it on home console" crowd taken care of, the rest of you probably want a little insight on whether or not this is a worthy purchase. My vote goes to yes. If you haven't yet played a Dead or Alive, you might be surprised that this is no button-mashy, "sweep the leg, Johnny" fighter; there are some deceptively deep mechanics at work with each fighter and fighting style. I've heard the precision combo/cancel/counterattack systems compared to rock, paper, scissors in the past, but it is so much more than that. Each move and attack can be avoided, countered or blocked, and the same goes for whatever attack follows, and the same for the moves after that. No fighting game out there is totally immune to win-by-mashing-buttons, but few series can be broken down into a science like Dead or Alive. Maybe Virtua Fighter, but not too many others are as tactical and precise.

Unfortunately, the game's solid fighting mechanics aren't equaled in awesomeness in other areas of the title. The story mode, for example, is equal parts boring and confusing. The "story" involved, told through cutscenes mostly, doesn't make a bit of sense and has players jumping between fighters as it moves along. This isn't exactly a great way to learn the game, constantly having to adjust to a new character's moves isn't easy. Further fault can be found in the touch battle mode, which has players tapping the screen to fight and block enemy attacks from the first-person perspective. Sounds cool, right? Yeah, it sounds cool, but it isn't. Furiously poking at the Vita's screen will usually win a fight without any of the skill needed for normal matches, and after testing it out there is little reason to go back and try again. Like it said, cool idea, bad execution.

Lastly, let's talk about the online modes. The promise of playing against both fellow Vita owners and console gamers alike is tempting, but it only fulfills its promise half as well as you'd like. Even with a great connection, you'll still see significant slowdown and lag during matches, a problem that doesn't plague the console versions. That means they have the upper hand going in, and there isn't a thing you can do about it. Also, and this fault doesn't lie with the game itself, but I found precious few people to fight with online. The servers aren't a ghost town per se, but I expected more than just a handful of the same people who always seem to be online and willing to throw down. 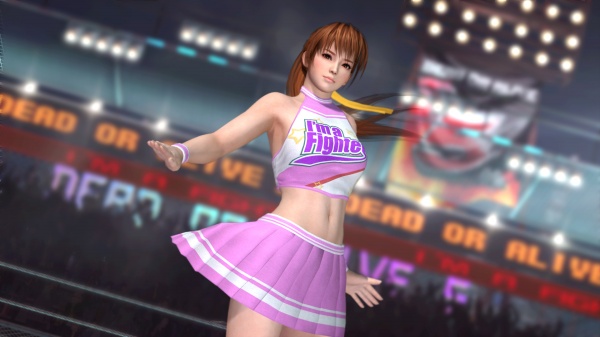 Even with these warts, Dead or Alive 5+ probably takes my vote for the best Vita fighter out there. It avoids the graphical problems and slightly stiff gameplay of Mortal Kombat, the too easy bent of Marvel Vs. Capcom 3 and the spamming super moves of PlayStation All-Stars Battle Royale. It even manages to easily outclass the 3DS launch title Dead or Alive: Dimensions, a game I actually had a lot of fun with. Who would have thought there was a pretty decent game under all that jiggling?

Final Rating: 83%. There's a good game somewhere under all that jiggling.