Sony's PlayStation Vita handheld is in trouble. The brilliantly constructed "handheld of the future" hasn't found the market foothold that is currently being enjoyed by Nintendo's 3DS, and there are a few reasons for this. Despite a pretty good lineup of games at launch, the Vita hasn't seen much support since. To make matters worse, the $250 price tag (that doesn't include the needed - and expensive - storage media) isn't setting off any crazed consumer demand, either. In the interest of stemming the tide of bad news followed by worse news, Sony has finally released a game from a tried-and-true console success, the Resistance series, and are banking on a "killer app" status for this spin-off, Resistance: Burning Skies. Unfortunately, if games like this are the best the Vita has to offer, the handheld may be dead and forgotten long before its time.

Burning Skies chronicles the story of Tom Riley, a firefighter caught up in the first wave of the Chimeran invasion of North America. Europe has already all but fallen to the alien invaders, and the "head in the sand" approach of the U.S. government ensures the Chimera have a fairly easy time in gaining a foothold on our shores. Anyway, all this exists as window dressing around Riley's story, which has him helping the military fight the Chimera while worrying about his wife and daughter... You know what? I'll stop there. None of it really matters. The firefighter angle, which could have been very interesting, ends up only coming to light in scripted "carry so and so to safety" moments and the fact that you have an axe as a melee weapon. The family angle provides no emotional punch because the in-game sequences come off as so artificial. But the worst of all is the missed opportunity on the "everyman in the fight for America" storyline. Tom Riley is a mostly mute, soulless protagonist; a bland, faceless vehicle for carrying players from one lame shooting sequence to the next, with scripted events tossed in every so often to up the excitement - a move that never manages to work. Not even once. Games of Whack-a-Mole at Showbiz Pizza have more emotional heft and backstory than this handheld shooting gallery.

Let's talk about how Burning Skies looks. Burning Eyes may have been a more apt title. This flagship FPS from a PlayStation flagship series barely even manages to look as good as the 2009 PSP Resistance spin-off, Resistance: Retribution. That isn't an over-exaggeration to emphasize that Burning Skies doesn't come anywhere close to pushing the Vita's graphical capabilities, it is gospel truth. One look at the square-headed, badly animated Chimera or the distractingly lame fire and environmental effects will have you, the extremely disappointed player, singing from the same hymnal. And as bad as the Chimera look, they are figuratively shouted down by the disturbingly sallow and creepy-looking human characters. Riley's wife and daughter, along with members of the armed forces and fellow firefighters, somehow manage to be more upsetting visually than the alien scourge. I hate to keep harping on the same point, but it probably took you more time to read this paragraph than it did to create this visuals in Burning Eyes... I mean Skies. 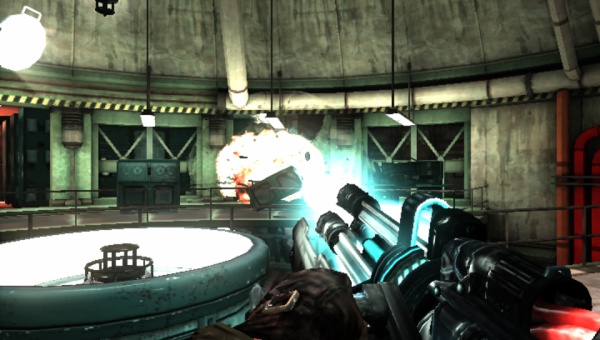 Surely it couldn't get any worse, right? Wrong. I haven't even gotten to the absolute worst touch controls I've ever had the displeasure of suffering through, or the WTF?! online multiplayer. Tell you what - I'll save my time and yours by saying that the online deathmatch only supports up to eight players in laggy, painful warfare. And this from a series that boasted some of the biggest online fights on the PS3 years ago. Shameful. With that out of the way, I'm going to ask you to settle in for the segment on the Vita-specific controls that transform a bland yet playable FPS into a dual-stick disaster.

Burning Skies, in true Resistance fashion, offers plenty of weapons that boast primary and secondary fire modes. The Augur still shoots through walls and creates cool barriers, human weapons still have the grenade or shotgun secondary fire, players even get access to drones and modified grenade/landmines. Cool, right? Wrong. Every single weapon you have access to has a shoehorned-in touch screen method governing the usually necessary secondary fire options, and the melee axe weapon is completely and unchangeably mapped to a touch screen command. Remember, this is a dual-stick FPS in true console fashion. So players are expected to either take their thumbs off the analog sticks to use the touch screen secondary fire options (not gonna happen, guys) or miraculously grow more fingers or a third arm to make all this stuff work. If you've ever played any FPS or any touch screen game before, you should know, without ever even touching Burning Skies, that this simply WILL NOT WORK. As you add weapons to your arsenal, the main challenge of the game becomes figuring out how to work around not using secondary fire, grenades or melee weapons, aka everything mapped to the Vita's touch pads (front and back). In a single ray of sunlight, the developers decided to give players the option of (awkwardly) using down on the system's d-pad to make Riley sprint. If they hadn't included this, the game would have been rendered completely unplayable - the main input for sprint is, get this, a double tap-and-hold on the system's rear touch pad. The first dual analog handheld FPS has been dreamed of for years as a breakthrough for console controls on a portable device. Burning Skies' need to cram in touch controls takes that dream and holds it underwater until the bubbles stop. 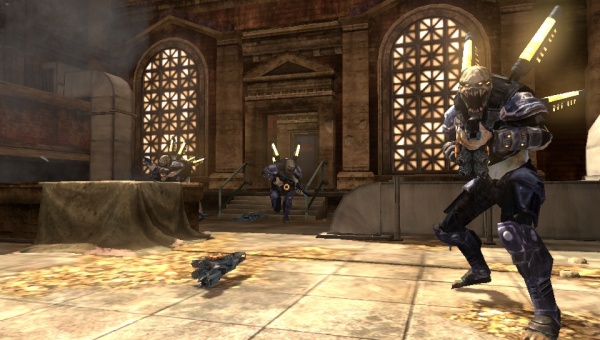 If you've read any other reviews for this disaster of a game, you probably noticed I left a few things out. A miniscule six-hour single player campaign, graphical and sound glitches around ever corner, the dumbest enemy A.I. I can remember facing; all valid criticisms I just didn't get around to. Resistance: Burning Skies is to the PlayStation Vita as Lair was to the then-struggling PS3; an overhyped, underperforming title weighed down by bizarre design decisions and problems upon problems upon even more problems. Burning Skies easily trumps Ridge Racer as the laziest, most disappointing title on the Vita yet, and the only advice I can offer if you decide to try this for yourself is make sure you buy it at retail, rather than downloading it from the PSN Store. That way, when you throw it down in absolute disgust at what has happened to a once great franchise, you can convince some secondhand game store to give you seven bucks in trade for it back.

Final Rating: 30%. Resist the urge to buy this game.