Outstanding games have been few and far between on the Vita so far, but LittleBigPlanet shows that there's still plenty of hope and potential for Sony's portable system. The game manages to recreate the gameplay experience of LittleBigPlanet on the PS3 without compromising anything and to integrate the touch controls in a way that actually enhances the gameplay. If you've enjoyed your time with Sackboy on your PS3 and were wondering whether or not the game is worth purchasing on the Vita, the answer is a resounding 'yes'.

In his inaugural Vita adventure, Sackboy finds himself called upon to help save Carnavalia from the Puppeteer, once a happy member of Carnavalian society who has since gone mad and is now bent on destroying it. In his quest to save Carnavalia Sackboy will need to make his way through five different worlds, each with its own unique and imaginative theme. It's obvious that a lot of thought and design went into the look of each level, and part of the fun of the game is in just seeing what each new level and world will bring.

The gameplay is similar to that in the other LittleBigPlanet games; light platforming gameplay with a forgiving nature and an emphasis on puzzle solving. You'll reach a section of a level, figure out what combination of jumps and other actions will get you to the next auto-save point, and then repeat the process until you reach the end of the level. These save points are placed frequently throughout the levels so you'll never be forced to replay long stretches of the game if you make a mistake. This along with the forgiving controls and floaty jumps make for a game less focused on arcade skills and more on fun ... and exploration.

Spend a little extra time poking around the levels and you'll find plenty of hidden (and not so hidden) collectibles such as outfits and accessories to dress up your Sackboy, items to decorate the POD that serves as the game's hub, and items that you can use in creating your own levels (more on that later). You'll find yourself revisiting levels several times in order to both find 100% of the hidden collectibles, to improve on your score, and to attempt to reach the end without dying once. This alone gives the game plenty of replay value, but there's even more than that to keep you playing LittleBigPlanet for quite a while.

First of all there are bonus levels within each world. Find a key in one of the story levels and you'll unlock a bonus level. Calling these bonus levels "levels" is a bit of a misnomer because each one is really more of a puzzle or arcade mini game than another platforming level. Variations on Whack-a-Mole, Bust-A-Move, and a Tetris-Jenga hybrid are among the bonus levels you'll find in the game. If you reach a certain score in each of these games you'll be rewarded with bonus collectibles, and as with any arcade game there's always the incentive to go back and try to beat your high score.

As you make your way through the game you'll also unlock puzzles in the game's arcade world. These are arcade games that are even further removed from the game's story mode and are really like self-contained bonus games that just happen to come with LittleBigPlanet (not to mention the fact that they were all created using the game's powerful level/ game creator). You wouldn't think that a platform game would come with a space shooter or a puzzle game like those you'd find on an iOS or Android device, but LittleBigPlanet does.

The game's levels do an excellent job of naturally integrating the Vita's touch controls into the gameplay without ever making them feel like they were added to the game just for the sake of adding them. You'll move platforms around with your fingers, tap them out and back with taps on the screen and back panel, spin wheels, launch springboards, and more. It all contributes nicely to the gameplay without ever getting in your way. 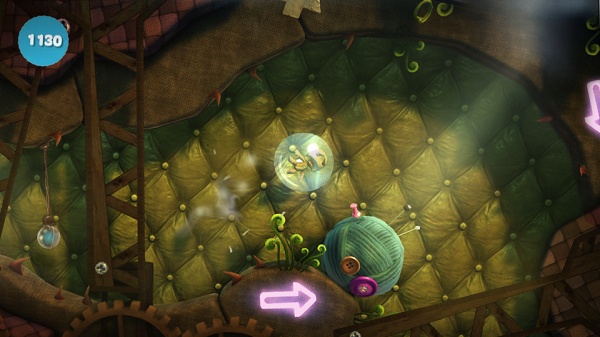 The Vita version of LittleBigPlanet comes with a level editor as powerful as the one you'll find in the PS3's LittleBigPlanet 2. That's may not be a good thing for you because as is the case with most powerful game editors it will take a good amount of learning, trial and error, and hard work to make a good level or game. On the positive side, you can benefit from the work others put into learning the game's tools by downloading the levels that they've created and shared. It's here that LittleBigPlanet provides a value that you just don't get from other games - it's essentially a gaming platform with its own game store in which everything is free.

LittleBigPlanet on the Vita is lets you take the game's console experience with you on the go. It's a must-own game on a system without too many must-own games, and the best excuse for buying a Vita yet.

Final Rating: 94%. The game's title doesn't lie, you get a big planet of gameplay packed into a little system.