After playing and enjoying many other wrestling games over the past few years, I couldn’t wait to try out Big Bang Pro Wrestling. From the trailers, I could see a resemblance to Saturday Night Slam Masters and it does indeed play a bit like that title. Big Bang is my first experience with a Neo Geo Pocket title and I must say I’m amazed at the overall creativity that the developers had with what little power the Neo Geo Pocket had back in the day.

Big Bang Pro Wrestling has a cast of ten wrestlers to choose from. Many of the wrestlers have some sort of resemblance to an SNK character or a WWE wrestler. The overall sprite work is pretty amazing for a Neo Geo Pocket title. Animations are limited, but the game certainly maintains some good eye candy overall. Each fighter has their own set of attacks and a few unique grapples. All fighters also have their own unique finisher. Finishers build up as you land attacks and, once you perform a finisher, that finisher will put some major hurt on your opponent and set up a pin or submission. 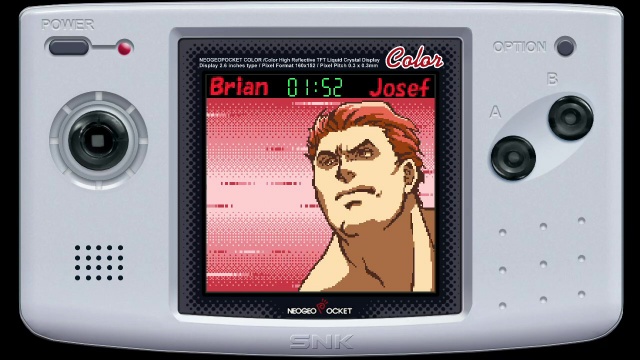 Just like many other wrestling games, you have your basic attacks and grapples. Whenever you move into an opponent, you’ll both enter a grappling animation. From there (with certain timing), you can initiate many grapples, takedowns and change the positioning of your opponent. It’s quite impressive how this game handles its controls. For only having two buttons to work with, the game certainly has a good share of attack options. Grapples and attacks are mapped to a direction along with a button press. The game definitely takes some dedication to learn and thankfully, there is a set of instructions that break down all combinations in the menu.

Probably the hardest technique to learn is the timing for grappling. You have to time your button presses well or the game will not let you perform a grapple. This timing is especially needed for CPU opponents. The game has your basic one player match where you can choose from a variety of modes to play. Besides the standard match, the game offers No Rules matches, Money Matches and Coffin matches. No Rules allows you to break the rules and use weapons such as chairs outside the ring. You can also knock out the referee in normal matches so that you can break the rules until the ref recovers. Money matches requires players to climb a rope outside the ring to reach a bag of money. In the Coffin matches, the winner will toss the opponent into a coffin.

The main single player mode is the IEW mode. In this mode, you’ll have to work your way through all other wrestlers in an attempt to win the championship. All matches start out with the basic rules then they are switched up to different match rules once you gain the title and have to defend it. There is an actual storyline per character. Before each match, both characters will have words before the entrances are shown and the match begins. 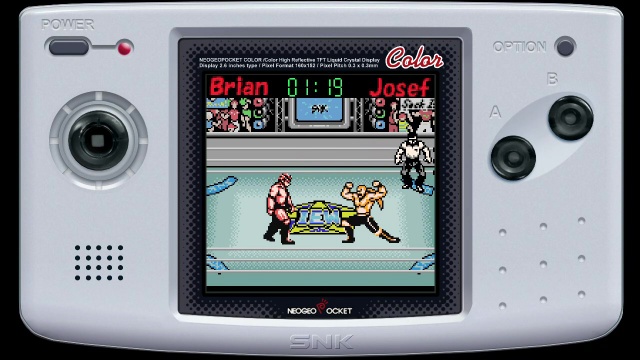 Sadly, IEW mode shows off the game’s biggest flaw. The CPU wrestlers are not fun to fight at all. All of them have to be fought a certain way that causes you to limit your moves in order to actually win against them. CPU opponents will constantly walk beside your character to where you can’t hit them with a normal attack. You are nearly forced to grapple with the CPU and that requires precise timing to get it off. Once the CPU is down, you can pick them up then go for other attacks if they are dazed. You can’t go out of your way and try for many special grabs or setups against the CPU because they simply don’t allow it. You are forced to play a certain way and if you break that habit, then you will be demolished.

Big Bang Pro Wrestling honestly has a lot of stuff going for it, but when it comes to actually playing it against the CPU it falls flat. It’s simply not fun to play it single player because you have to play in a way that manipulates the CPU to where you can win. It’s sort of like old-school Mortal Kombat CPU opponents only without any sort of variety, since all the wrestlers in this game will play the same when fighting against them. The game looks beautiful, it has some great character designs, it has surprisingly good controls, the sound is decent, but when it comes to actually playing it, it just isn’t fun.

The Good:
+ Interesting roster of characters
+ Visuals are pretty good for a Neo Geo Pocket title
+ It’s amazing what all you can do in this game with only two buttons

The Bad:
- The game is not fun at all versus the CPU
- Too much dedication (for timing) required to perform grapple moves successfully

Final Rating: 50% - Big Bang Pro Wrestling is fun to look at and admire for its controls and many other factors, but it isn’t very fun to play.