Zombie Rollerz: Pinball Heroes is a fantasy rogue-like RPG zombie horde pinball game, and as such is probably the first and only game in that very specialized subgenre. The game’s overworld consists of a series of randomly generated maps that reveal their paths and special locations as you move from hex to hex. You are given a number of limited moves per ‘day’, and the consequence of nightfall is that a zombie corruption begins to spread from the map’s start and moves down its paths, reaching further with each passing day. If you find yourself trapped by the corruption and forced to move through it, you will lose health for each corrupted hex that you pass through. Lose all of your health while navigating the map and it’s game over – this is a rogue-like after all. Your ultimate goal is to reach the boss gate at the end of the map, but you don’t always know which fork in the road to take and sometimes an intriguing location will tempt you to push your luck a bit for the potential for some shiny loot. You’ll also encounter some choice-based random events along the way with which to try your luck. You’ll be given some brief text describing an encounter followed by a list of choices. The outcomes of your choices can be good or bad, gain some loot or lose some health, that sort of thing. They seem to be there more to add a little extra content and randomness to the maps, but they’re pretty quick interactions. 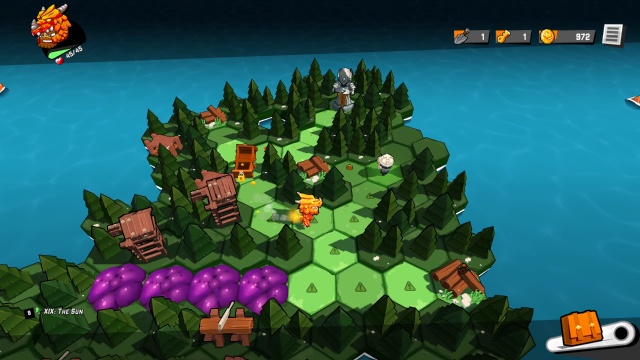 But Zombie Rollerz: Pinball Heroes is not an exercise in walking along random hex paths. Afterall, “pinball” is in its name. Some of the map’s hexes contain zombie encounters and these hexes are invariably placed along the main route or as a guardian of a special hex of some sort, so you’ll often cross into most if not all of the zombie hexes on a map. When you do, you’ll initiate a battle and that’s when the action moves to the pinball table.

Now this pinball isn’t pinball in the strict traditional sense - it’s more of a battle against zombies in which your weapon is a pair of paddles and your ammunition is a boulder-sized ball. Picture less of a collection of bumpers, targets, and ramps, and more of something with zombie-generating gravestones, exploding crates, and medieval-ish obstacles. You control a base of sorts consisting of a ballista and a pair of flippers. The ballista is your ball launcher and the flippers are, well, your flippers. Pinball purists may balk at this, but the game provides an aiming assist in the form of a dotted line that indicates the ball’s direction of travel when you are launching it or you hold it on the flippers. But then again, pinball purists won’t find what they’re probably looking for here anyway. The physics are serviceable, but in no way fully realistic. However, you’re bouncing balls of off a bunch of zombies, so let’s not be a stickler for realism here. 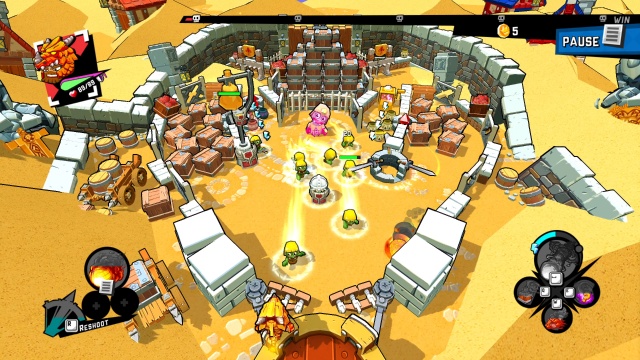 Your goal is to eliminate all of the zombie waves, but rather than limiting the number of balls available to you, the game requires that you do so before your health runs out. Having a ball go out will cost you a little health, but also if the zombies reach your base they will begin to attack it which will cost you health as well. Boss battles are just you versus a boss zombie, and is typically the case with bosses, each will have their own unique attacks and patterns. You defeat them the same way as you do the regular zombies, by hitting them with the ball, but like you they have a health bar you’ll need to whittle down to nothing to win. There are also some treasure levels that are set-up like puzzles. You’ll need to figure out how to maneuver the ball through the playfield to activate the mechanics that will make the treasure chests available and then you’ll have to hit the chests themselves to collect the treasure.

The game’s RPG aspect also comes into play in the pinball battles. As you level-up upgrades will become available to you that give you access to various supers that can be applied to the ball. For example, you can turn it into a ball of flames or use it to call down a meteor shower on the zombies. Once acquired, these can be upgraded to be more powerful, but this is a rogue-like so once you die you’ll be back to square one. 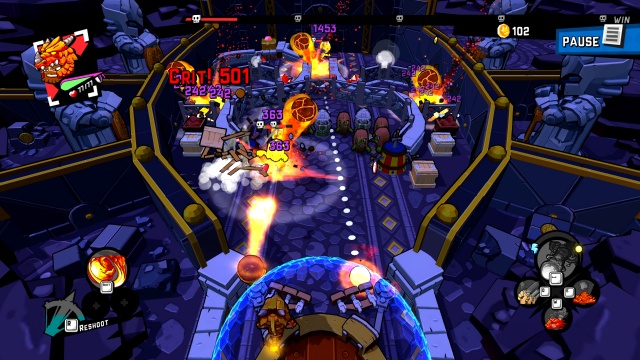 The pinball game really is the centerpiece of Zombie Rollerz, but the pinball gameplay is far from a simulation, or even most arcade-like pinball games. The play area can get really crowded at times, and between the hordes of zombies and the constant explosions it can be difficult to keep track of where the ball is at any given moment. It gets more and more like this the farther you progress, and soon the pinball game gives way to flipper-mashing and special power spamming. In the end you have a rogue-like that is more fun at the outset and gets less enjoyable the further you progress, which is the opposite of what you want in a rogue-like.

Final Rating: 68% - The game starts off as a novelty, but the pinball gameplay soon dissolves into a mass of explosions and zombies.