Zombie Army 4: Dead War is a third-person co-op shooter developed and published by Rebellion. This game is the sequel to Zombie Army Trilogy and is a spin-off of the Sniper Elite series. All other versions of Zombie Army 4 were released back in February of 2020 and this more recent Switch version was released in April of 2022. Everything that you know and love about Zombie Army 4 is included in the Switch version with a few extras.

Without going any further, let’s go ahead and get into what makes the Switch version different. As expected, some corners were cut to get the game to run on Switch, but the game overall looks and runs quite good on Switch. Some textures are lower resolution along with a few jagged edges every now and then and the game runs at around 30-40 fps most of the time. The good part is that the game stays locked at whatever framerate it runs at quite well. This game looks and runs very well for a Switch port. The main areas that look worse on the Switch are burning effects and other hazard effects. You can tell they have been toned down. 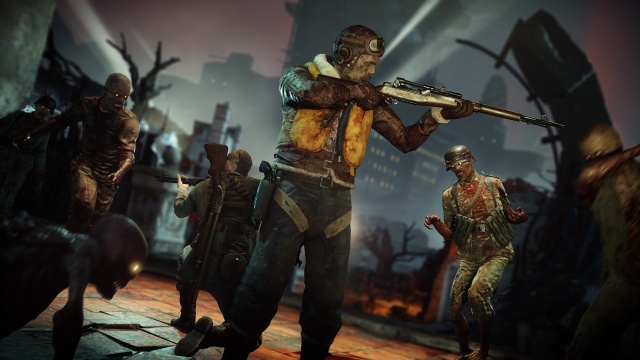 Naturally, the game can be played portable using the Switch system. Gyro controls (motion controls) have also been added as an option for players. You can control the camera while moving and aiming with the motion controls if you choose to do so. The game also includes all the previously released season 1 DLC. This really isn’t that big of a deal however since the DLC has been made free on all consoles by now. Season 2 and 3 DLC still need to be bought.

The joy cons work alright with the game, but nothing beats a good joypad. I found the Joy-Cons to be a real pain when trying to aim with them using the thumbpads. My hands would constantly cramp from the grip I had to use while playing with them. Zombie Army really requires precision and that is not easy to get if you play with the joy cons without motion controls. I’m not really a big fan of the Switch’s motion controls, so I didn’t try it out much. 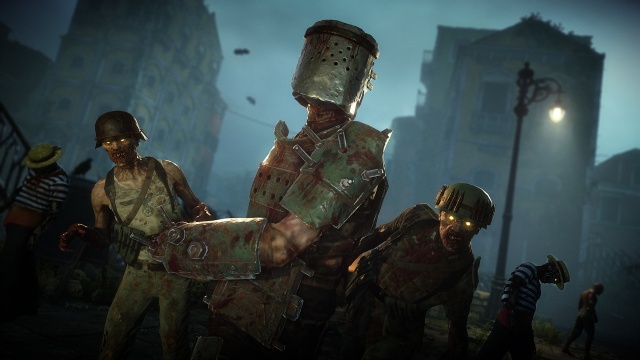 The average zombie is the main enemy type and you’ll run into many different variations as the game continues. Some zombies feel like mini boss type of enemies. While gunning down zombies, you’ll eventually reach a saferoom where you can grab more ammo and items and also change your weapons before heading out to do more of each mission. For guns, you can carry one secondary (shotgun or machine gun), one rifle and one sidearm (pistol or miniature shotgun). Each weapon type has many varieties to choose from.

Zombie Army 4 has different melee attacks per character along with a charged melee attack. While shooting zombies, once the combo goes over 10, you get access to special attacks such as a special melee that replenishes a bit of health once landed. There are also special gun attacks. The game encourages you to shoot several zombies in a row to land a high kill combo. Combos will give you extra experience points for upgrading your character. As your character is upgraded, you can use upgrade kits to buy better upgrades for your weapons. 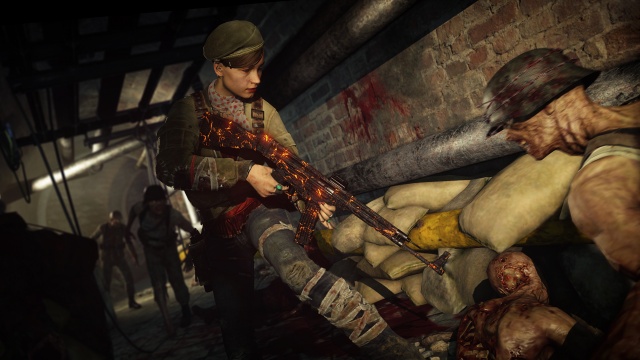 This game has tons of gore in it. Zombies will be splatted all over the place as you shoot them. As usual, headshots are the best way to kill zombies. If you kill them with a headshot, they can’t revive. The game also still has the “kill cam” from the Sniper Elite series. Shots will randomly slow down to show the bullet piercing an enemy’s body. The appearance rate of the kill cam can be adjusted in the menus.

Just like in Zombie Army Trilogy, the overall soundtrack of Zombie Army 4 is really good. This game has some banging tracks to it that truly fit the action on the screen. Character voices seem pretty well done as well. Overall, the game is a fantastic Switch port. The developers really did a great job in optimizing this game for the Switch. I do recommend the other versions of this game for the full experience, but the Switch version of Zombie Army 4: Dead War is a great choice if you want portability or just to have the game on your Switch console.

The Bad:
- The Joy-Cons work ok, but a joypad is still far better

Final Rating: 78% - Zombie Army 4 on Switch is very well-optimized so run out and buy it and enjoy killing zombies on the go!