Okinawa Rush is a 2D side-scrolling beat’em up developed by Sokaikan ltd and published by No Gravity Games. This game has some of the most satisfying combat I have seen in a side scrolling game. There are times where the screen is showered with body parts of your enemies as you finish them off. If you’re familiar with the Metal Slug series, this game has little extra death animations and other unique animations that are often found in Metal Slug. It’s literally like a Metal Slug beat’em up with a fancier style of combat that you don’t find in other beat’em ups. Overall, the game is short, but sweet, and there is a ton of depth to explore in its gameplay.

This game is far more than just your average beat’em up. It plays similar to a fighting game with all of its required inputs for getting out moves. Some of the inputs can be annoying if you use the default joycons on the Switch console and your hand is likely going to hurt after a while. This is the type of game that really requires a directional pad so you can easily tap out the inputs. You get to choose from three characters and each one has some slightly different moves but all of them share the same inputs. Some inputs are fireball motions (d, f, attack) and some are more complex such as f, f, d, attack. All characters have a rage meter that slowly fills. The rage meter allows you to unleash special moves and a super special move at the cost of meter. All characters’ super special moves will basically wipe the entire area free of enemies. 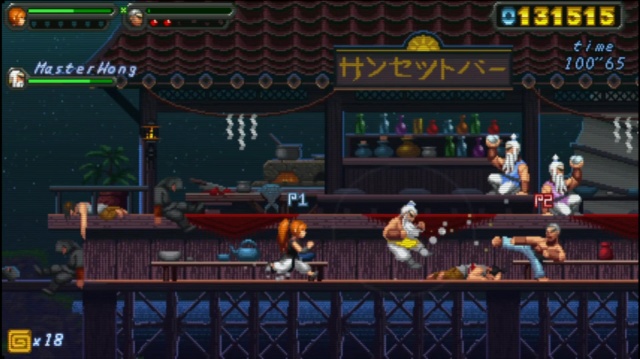 From the start, you choose either Story mode or Arcade mode to start the game. Arcade mode is basically just story mode without much of the story, no upgrades, and it has a default difficulty. Story mode allows you to practice moves in a training mode and build your own dojo. You can level up your characters’ stats to a certain point while training in the game’s many training sessions. Training mode does a good job of teaching you the basics of combat and defense as well as other areas of improvement.

The game has a total of five levels. Once you’re done with your training, you can start out at any completed level. The game has around 10 or more difficulties to choose from. It’s really good that it has this type of expansive difficulty selection since all difficulties are kind of hard, but the easiest will get you through the game if you’re new and don’t really know the moves of the game that well just yet (like me). Enemies in this game are MANY in number and they will crowd you often. In later stages, they will spam your character with attacks as much as you can spam them.

So much of the gameplay is about knowledge of your moves and how to defend. You don’t have a block button in the game. You can block enemy projectiles by tapping toward the projectile just before it hits your character – sort of like a Street Fighter III parry. Levels have dangers that will one-hit kill your character at times. Spikes can instantly end your life. Spikes and other one-shots can be quite annoying when jumping down to a lower floor where you can’t see spikes until the screen scrolls with your character. The game will warn you of upcoming one-hit kill dangers, but sometimes that warning doesn’t come soon enough. Thankfully, the game is quite forgiving with extra lives that you’ll find hidden throughout each level. 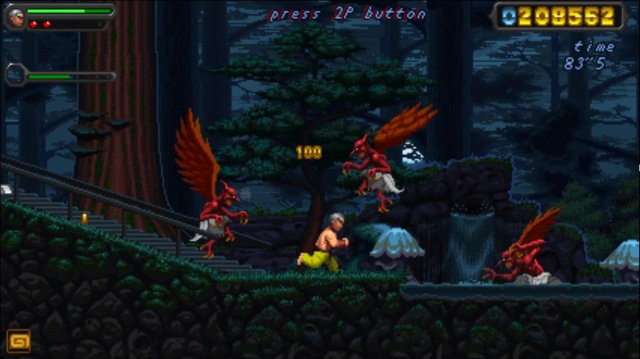 The game’s sprite work and overall look is fantastic. Just like I said in the opening of this review, it reminds me a lot of Metal Slug, only without the comedy and guns. You can knock down lights that can burn enemies and see special burn animations. Enemies constantly explode from your screen-filling attacks. Sometimes enemies get impaled when they hit a wall. All the time, enemies are dropping items like mad to increase your score and health bar. Just like in Metal Slug, you’ll find captive people that you can rescue and they will provide you with extra items. There are a certain number of captives per level and they all add to your score once the level is completed. Along with the look, the game also has a great soundtrack to go along with each level.

All levels end with a boss fight. The boss at the end of each stage will often kick your ass unless you can find out the timing on defending against their attacks. Bosses can often one-shot you with certain attacks. Each character in the game has their own dialogue in the story but the story is similar for each. All characters have their own three unique endings as well.

Okinawa Rush is definitely worth a try for fans of 90’s and early 2000’s arcade games. It has a very arcadey setup and is quite satisfying to play through. Harder difficulty will give you a level timer that you’ll have to constantly add to by defeating enemies – sort of like a survival mode. With only having five levels, the game is very short (only takes around 2 hours to complete), but it has a lot of replay value in its difficulties. It also has its own in-game achievements on the Switch and many of the achievements are VERY challenging!

The Bad:
- Cheap deaths here and there
- Very short overall
- Gets repetitive after a while (like all brawlers)

Final Rating: 80% - Okinawa Rush is a satisfying return to late 90’s/early 2000’s arcade style with its mix of beat’em up and fighting game gameplay.