No More Heroes 3 is a third-person hack and slash adventure game developed and published by Grasshopper Manufacturer exclusively for Nintendo Switch. The game is the fourth and final installment in the No More Heroes franchise and the third in the mainline series. I’ve played many of Grasshopper’s games but this is my first time to try out one of his No More Heroes games. Even with this game flaws, it’s a really, really good game overall. If you’re into addicting combat, this game definitely delivers. Be sure to try this game if you own a Nintendo Switch – it’s worth it! If you’re a Suda51/Grasshopper Manufacture fan, you already have this game, so I’m most likely just confirming the value of your purchase.

Once again, players take on the role of Travis Touchdown and return to the city of Santa Destroy. A boy makes friends with an alien (named “Fu”) at a young age and then is reunited with the same alien several years later, but this time, the alien wants to conquer the world. Travis Touchdown isn’t having this and challenges Fu and his minions. Travis must climb the rankings by defeating each of the assassins that Fu has set up to beat him and ultimately face off against Fu himself. 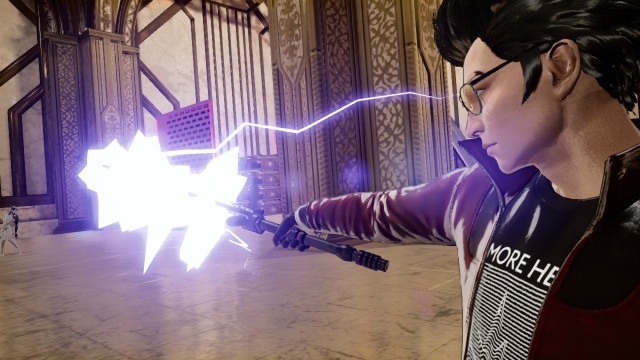 No More Heroes 3 has a lot of variety in its gameplay, but at its core, the game is a hack and slash and the hack and slash gameplay is fantastic. Travis has two attack buttons, a jump, a dodge, four death glove skills, and a block/lock-on. Travis uses a beam saber to fight off enemies and this must be charged every now and then in order to keep attacking with it. The beam saber can also be charged after hitting enemies with certain attacks. Along with attack combos, you have access to death glove skills that recharge over time as you use them. Dodging an attack just before it connects will give you a perfect dodge which slows down time and allows you to gets several hits in on enemies. Perfect dodging is nearly like activating a god mode for a few seconds (you’re invincible), though you are susceptible to damage the moment you come out of a perfect dodge. A good chunk of most battles is all about getting a perfect dodge and pummeling enemies while they recover, though this is easier said than done as the game starts to mix enemy types.

Finishing off each enemy will give you a spin on a slot machine that will give you bonus attributes or abilities. Get lucky enough and you will literally win the battle all from luck – there is one ability that lets you shoot and instantly kill every enemy on the screen. After each death, you’ll be allowed to retry the fight and you’ll get a spin on a wheel that will give you various ability increases or decreases. You can actually get unlucky on the retry wheel and start the battle needing to recharge your beam saber. The retry wheel is incredibly useful for tough boss fights. Travis can also carry food into a battle that can be used to replenish health or give status boosts. Food can be ordered as takeout (eaten during battle) or you can eat the food before a battle for an increase in attributes at the start of the next battle.

The visuals during combat have a lot of eye candy in them such as blood flowing with each attack and the screen turning black and red as you deliver your final bloody attack. The controls are also quite solid. The game has a very good use for the joycons and their motion controls. You have to hold a shoulder button and shake the right joycon in order to charge your beam saber. Each final hit requires a swipe with one or both of the joycons. The game’s controls work really well once you adjust to the button layout. If you happen to play this game on portable Switch, the right thumbstick is used in place or the motion controls (just press in the direction shown on the screen). 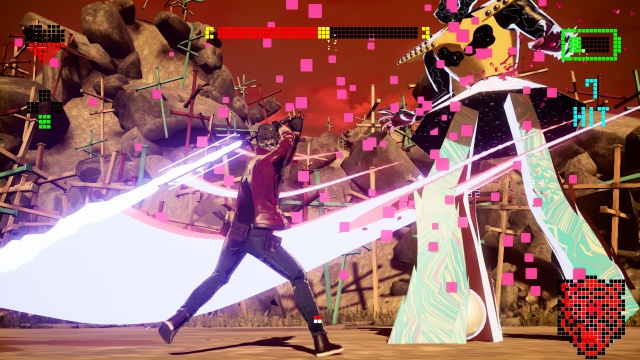 The game also has shooter stages where Travis gets into metal armor and fights a big enemy in outer space. These stages have totally different controls and allow you to hover around the boss enemy while shooting it. The shooter stages start out incredibly easy then pick up in difficulty as you progress. Each enemy has several weak points that you have to destroy in order to defeat it. Travis has a super beam attack that can severely damage a boss at the cost of a full boost meter, but later on, you’ll have to use that meter for boosts in order to dodge enemy attacks since they get much more aggressive later on. The main flaw with the shooter stages is that there are only a few (around 3, I think it was) enemy types to fight throughout the game and they keep repeating a bunch until you reach the next one (then that one keeps repeating). Shooter stages are mainly found in extra battles that you can find in the open world map.

On top of the combat, the game has minigames that you can try out in order to gain extra money and experience. The minigames have a lot of variety in them. Some are easy (shooting alligators), some are interesting (collecting trash in swamps while suplexing alligators), some are tedious (mowing lawns) and some are just plain annoying (mining with instant kill lava around the area). I do admire how much variety there is in the minigames. The game has many boss battles and they are actually the main feature of the hack and slash gameplay. Each boss has their own unique way to battle them. Some of them are normal hack and slash battles but some of them mix up the gameplay quite a bit. I would go into detail, but really, I shouldn’t spoil the boss fights since they are so good. I’ll just put it this way - these developers have WAY too much fun when it comes to boss battles.

After each battle or side mission, you’ll gain money and skill points. The money can be used to buy items and it is also required for a registry fee in order to fight a boss as you go through the ranks. Skill points can be used to upgrade your attributes and unlock new skills. After each battle, you’ll also gain items that will allow you to create chips that you can equip to Travis. The chips will upgrade certain attributes or they might lower and raise other attributes.

Just like the other games in the series, No More Heroes 3 is presented with a cel-shaded look for its characters. It’s quite nice to see this style again since I don’t see it as often anymore – the cel-shaded style seems to be a common look for many of Grasshopper’s action titles. It’s quite amazing how many particle effects this game can take without slowing down. The screen is sometimes filled with explosions, blood and other particle effects and the game handles it quite well (no slowdown). The game seems to run at a steady framerate much of the time. There is only a hint of slowdown when driving Travis’ motorcycle (framerate gets a bit lower). In some areas, I would go too fast and portions of the screen would not be able to load in time as I approached them leading to some slight pop-in issues. 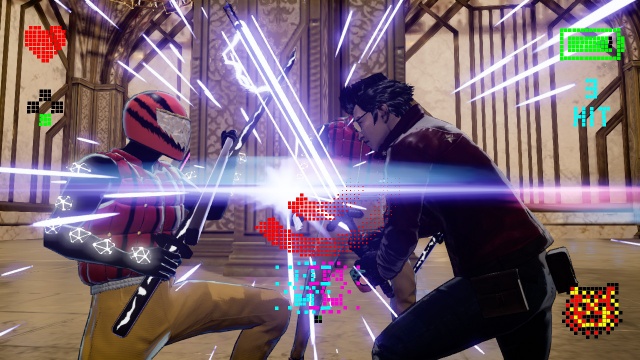 The music is quite memorable and so is the voice acting. Robin Atkin Downes once again returns to voice Travis Touchdown. The game has several other fine voice performances and many surprises (characters and events) here and there as the story progresses. The story and gameplay to this game are both absolutely nuts at times, which should come as no surprise with the developers that worked on it. The randomness in both the gameplay and story keep the entire game very interesting because you never know what to expect.

The main flaw that I find with this game is its overall setup in between boss battles. You are free to explore several town areas in an open world environment in between boss battles. You must always fight in a set number of “Designated Matches” in order to enter for a chance to fight the next boss. Designated Matches are spread across the maps and give you access to an enemy wave that you have to beat in order to get credit. After fighting in enough designated matches, you have to find an ATM to pay for the next boss match then find the match portal in order to face off against the next boss. Even though the gameplay for the designated matches is great, this overall setup gets repetitive since you face this setup after almost every boss fight.

The overall open world of the game has a flaw with the maps not being active enough. There are a number of side missions, shops and collectibles to find on each map, but the maps are far too big and have too much areas of nothingness spread throughout them. I suppose the developers wanted the maps to be big so you can freely ride your bike and nitro through the long stretches but having much of the area being so lifeless is highly noticeable. 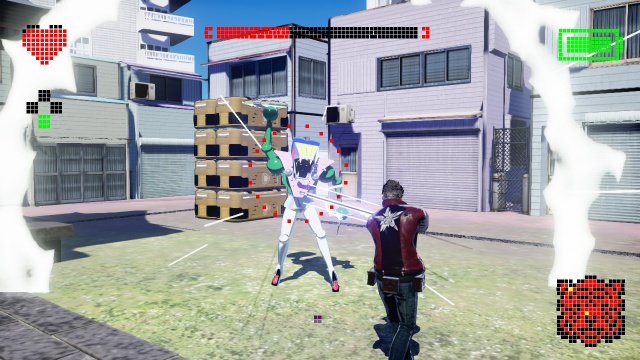 Once the game is completed, the game has a New Game+ mode (start a new game with all current upgrades) and there is a higher difficulty besides the default three difficulties. If you’re a Suda51/Grasshopper Manufacturer fan, buy this game. It is made for you! Even with the flaws that I mention, I feel the addictive combat and overall Suda51 wackiness far outweighs the negatives. I had a GREAT time with this game and look forward to more games by this developer in the future. This developer is such a great breath of fresh air with each one of their action titles. This title makes me want to go through and play the rest of the No More Heroes games.

The Bad:
- Repetitive gameplay setup leading up to a boss fight
- Shooter stages lack enemy variety
- The open world could be more exciting

Final Rating: 80% - Grasshopper Manufacture is at it again with another action title full of randomness and tons of fun.