World War Z is a cooperative third-person online shooter developed by Saber Interactive and published by Mad Dog Games. Back in 2019, the game was released on PC, PlayStation 4, and Xbox One and now we have a port to Nintendo Switch in 2021. Playing the game on Switch was my first time to experience the game and because of the overall enjoyment, I downloaded the game to see what it was like on Xbox Series S. Overall, the Switch version is quite faithful to the other versions of World War Z. I’m quite pleased with the game no matter what console I play it on – it’s just plain intense fun overall!

World War Z is loosely based off the book and movie of the same name. It takes place in the same world and has a great representation of both mediums. The game features a campaign, a horde mode and a multiplayer mode. The campaign can be played single player or you can team up with other players online. Each chapter of the game is set in a different location around the world. All locations have their own group of four unique survivors to choose from with their own storyline. There are a total of four locations and three to four individual levels with each location. The character diversity in this game is very noteworthy. You’ll find a great deal of nationalities and races among the cast and not many repeats – if you happen to get the Aftermath DLC on Xbox, the character diversity is even greater. 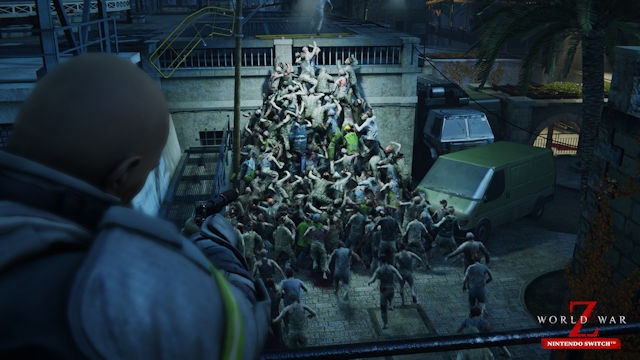 Each survivor is basically a skin. You can customize them with weapons and character classes. The game has about 3-4 different types of weapons for each weapon class. It has many weapons and they all feel unique in their own way (shotguns, handguns, SMGs, rifles, sniper rifles, flamethrowers, etc). You have your primary weapon, secondary weapon and heavy weapon all of which you can carry at once. Each weapon can gain experience as you use it and you can purchase upgrades for each weapon type in between stages. Character classes (total of seven classes) determine your starting weapon set and give you access to extra attributes exclusive to that class (such as reloading 25% faster). Each character class can be leveled up with points gained at the end of a stage to unlock more attributes in that class. Even though you start with weapons based on your class, you can also find weapons throughout a stage and change them whenever you want.

The main enemy in the game is the zombie for the most part. You’ll fight a variety of zombie types such as those that can infect with acid spit and those that run toward your group armed with explosives. The zombies in the game act much like they did in the movie. The zombies are fast and they climb on top of each other to build ladders up to high areas. When not traversing through a stage, your group will be preparing for an oncoming horde of zombies by fortifying the area. You can deploy automatic turrets, barbed wire, electric fences and other forms of defense to help fight off the horde.

The game has a decent story and atmosphere to it. Each stage has a certain number of objectives to perform such as finding a key to activate a console, protecting a certain person or defending a certain position among many other objectives. The difficulty can get very extreme even on the easiest of modes. When this game sends a horde after your team in later stages, the game gets SUPER intense. If you don’t plan properly, zombies will easily overrun your team on any difficulty. 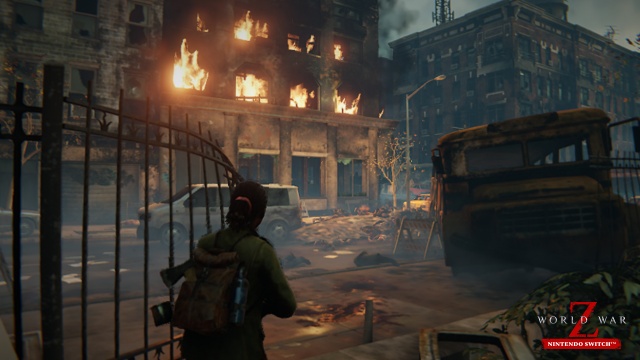 The Switch version starts out with offline mode as its main feature. The entire multiplayer portion of the game is a separate (free) download with the purchase of the game. It’s like the developers expect that many Switch players will want to play offline by default, which is strange considering that it doesn’t make single player mode any better accessible than it is on other platforms. The single player takes you through a near one hour stage per playthrough and you can’t pause the game or save. Once you die, you have to start the entire stage over again. It definitely adds to the difficulty of the game, but when you run across portions that are easy to fail (such as protecting something from a horde of zombies) later in a stage (they are often at the end) it can get frustrating. Speaking of difficulty, the game has a total of five difficulties to choose from.

The horde mode is similar to a Gears of War horde mode. It’s really fitting for World War Z since the defense areas of the campaign are some of the best. You gain points to buy extra weapons and defense items in between waves of zombies. It’s basically you and four other survivors against hordes that are constantly increasing in difficulty. The multiplayer features your standard Team Player vs Player type of gameplay that pits two teams of four players again each other, and it throws in zombie hordes that attack all players. There is also a Swarm Deathmatch, Swarm Domination, and King of the Hill mode. The multiplayer mode also has its own unique characters classes. The character classes for multiplayer determine your starting weapon setup and have some extra attributes just like the campaign classes.

Aside from spending your points to level up, the game also has many unlockables such as extra outfits and other customizations. It would take quite a while to unlock everything in this game, but that’s part of the enjoyment – it feels like your constantly unlocking new abilities or gun upgrades. Each character has their own unlockable profile video that lets you in on their background. The game offers daily and weekly challenges that can be used to gain extra points to buy unlockables and level up your character. Each challenge can be played offline or with friends just like the campaign. 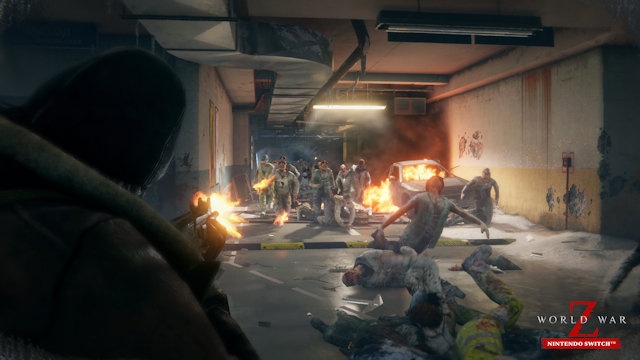 As already mentioned, I played this game on Xbox Series S while playing it on Switch. The Switch version sacrifices some higher quality textures to make the game move smoothly. The game moves at around a consistent 30fps (maybe a bit higher) for the most part. It has a bit of slowdown every now and then, but so does the Xbox Series version. The main important thing is that all the intensity is still there in the Switch version. It’s quite an impressive version of the game overall, and it’s amazing that it runs so well on Switch. The only thing that I have against the Switch version is using the joycons to play it – aiming is not that precise when using them. If you buy the Switch version, make sure that you can play the game with a proper control pad and not the joycons. The game plays just as well on a TV or handheld but I do not like using the handheld controls.

Even though the game does have an offline mode, it’s best played online with other players. The offline feels unbalanced at times. Your AI partners are very much a mixed bag in this game. Sometimes the AI partners help so much as to shoot an offscreen enemy that is WAY off in the background, but sometimes they simply stand in your way as your fire your weapons. One thing that was very annoying about the AI is whenever I would get pounced by a stalker - your only option is to get a partner to knock the zombie off while it claws at you. The AI will run to your location and instead of shooting the stalker off, it will move toward you and melee the stalker off ever so slowly while your health keeps going down. The game is challenging no matter how you play it or what difficulty you select. I do recommend other more powerful versions over the Switch version, but the Switch version is not bad at all if that if your only option or you just enjoy having your games on Switch. If you like Left 4 Dead or Back 4 Blood, this game is worth a try. I honestly like this game quite a bit and plan to return to it from time to time.

The Bad:
- Some slowdown, and framerate is lower than other versions
- The AI partners can be awful at times when it comes to helping
- Why can’t we mix and match the survivors into different locations?

Final Rating: 75% - World War Z is a great third-person shooter and the Switch version stands strong when compared to the other versions.