When it comes to difficulty in old-school games, the original Ghosts ‘n Goblins (especially the NES version) reigns supreme. The game is hard, it trolls, and it makes you go through all of its madness two times in order to get a true ending. Even with all that difficulty, the fans love it and it has spawned many sequels - even a knock off series (Maximo). The last GnG revival was on PSP and it was a remixed 3D version of the original game that played like a 2D side-scroller and was quite enjoyable for its time. Recently Capcom has released Ghost ‘n Goblins Resurrection exclusively for the Nintendo Switch. This game is yet another revival of the original GnG and continues to improve the GnG experience for a new generation.

The story to the game is very simple once again. Arthur is sitting around enjoying his time with his lady friend (Princess Prin Prin/Guinevere/fair maiden) and suddenly a shadow emerges and destroys the nearby Umbral tree shortly before the nearby town goes up in flames. During the chaos, a demon appears and snatches Arthur’s maiden and takes her to the demon realm. Arthur suits up in his armor and sets on his journey to rescue her. Arthur must fight through several stages (each with their own boss baddie) and reach the final boss in order to rescue her. As usual, the game is not complete after beating it the first time since you must gain the true ending. 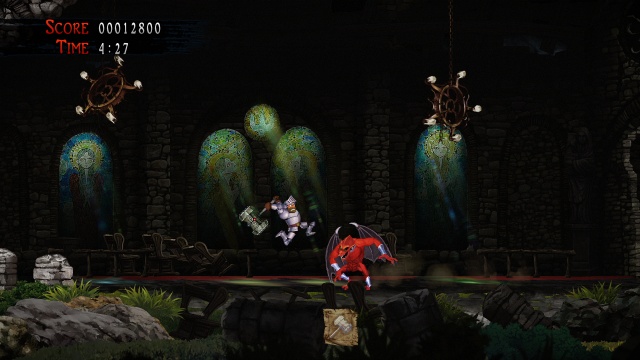 The presentation to this game is absolutely fantastic. The game opens up by pulling open a scroll with various images being drawn on the screen that tells our tale and the entire game looks like it was taken from a storybook. The characters and enemies all look like they are made of paint on a canvas or piece of scroll paper. The atmosphere is thick and really brought to life with its overall look. The music in GnG is usually quite good and this game is definitely no exception. Both the sound effects and soundtrack are perfect. The sound effects bring along your usual GnG sounds, such as armor clanging and enemy weapon piercing as you hack away at your enemies. The soundtrack has many remixed tracks from other games in the series. The game looks good either on a TV or in portable form. Even though some of the projectiles are small, I did not have problems seeing them in portable form.

Resurrection is like a mix of Ghosts ‘n Goblins and Ghouls ‘n Ghosts. It has many redone enemies from both of those games. The game has the reapers from Ghouls ‘n Ghosts, the zombies from Ghosts ‘n Goblins, the annoying flying blue demons from Ghosts ‘n Goblins and many other enemies that are both new and remixed. For instance, the big goblin that Arthur would run into in Ghosts ‘n Goblins is now much bigger but he attacks around the same way. There is also a bigger zombie that Arthur will run into. Oh, you remember those annoying plants that shoot projectiles? They are there, too. Every stage has a boss at the end with many different phases to its attacks. One of the first few stages has the Cyclops and his attacks have changed greatly from his appearance in Ghosts ‘n Goblins. The bosses in this game are super fun with how many phases they have and how much more difficult they can be compared to past GnG games. Boss fights in this game are quite epic. 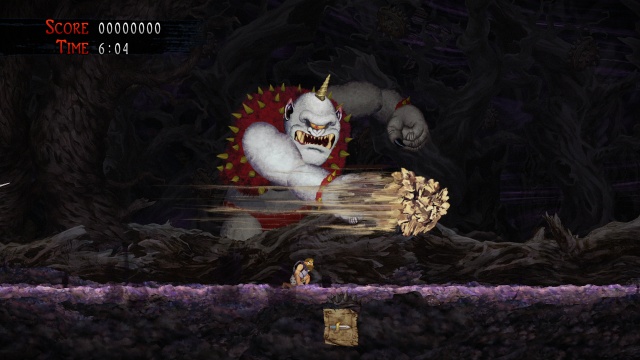 Unlike the old-school GnG games, you get to choose from different stages as you move on (usually two, but sometimes only one). As you explore each stage, you’ll find the usual power-ups such as different weapons and armor (including gold armor). The game brings in many weapons from older games along with a few new ones, such as a type of boulder. While exploring stages, Umbral Bees can be collected that will allow you to power up your magic skills. Arthur’s magic attacks are no longer pinned to gold armor anymore – you can equip them from the stage select screen (once unlocked) and they can be used during gameplay. Umbral Bees are basically this game’s collectibles.

As expected, this game is hard. The game is made for fans of the GnG series. If you are not a fan of the series, the game will be unwelcoming at first, but you might just find something you enjoy in it. The game offers four different difficulties – each with their own perks. It’s kind of funny that the default difficulty of the game is the hardest difficulty. Normally, Arthur dies in two hits, but if you pick a difficulty such as Squire, it takes more hits to kill Arthur – he loses less armor per hit. The game is no cake walk in any mode however. This game is designed to offer a challenge just like the rest of the series. One cool thing about the difficulty is that enemy bosses might have extra attacks depending on the difficulty chosen.

The main flaw to this game is its use of difficulty at times however. The biggest flaw to me is the Red Arremer. If you’ve played any of the past games, you’ll know how this enemy is good at dodging but, with enough effort, you’ll eventually hit him. The Red Arremer in Resurrection is designed to dodge ANY weapon that you toss at him until it comes time to finally hit him. I won’t go into spoilers, but he can only be hit during one specific animation frame and that is the ONLY time he can be hit, so you have to stand back and wait for that animation. He seems very unfair in this game, especially when you have to go through obstacles and battle other enemies while fighting him. 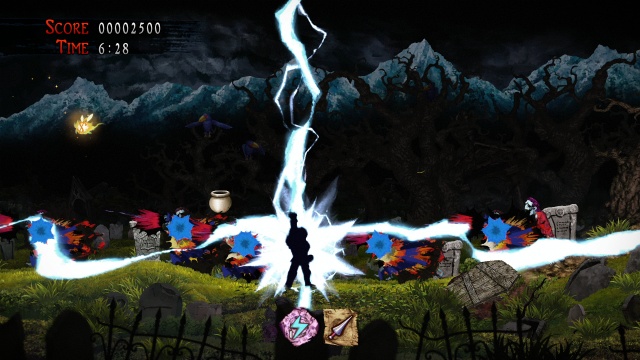 Once the game has been completed, you’ll unlock shadow versions of stages that you have completed. The shadow stages have a darker look and they rearrange the enemies and gameplay of the stages. Since you can choose from two different stages a good bit of the time while moving along the map, you can always go back through and pick a route unchosen as well. The game has a local two player co-op where one player can take control of a guardian spirit to assist Arthor. The cool part about the two player is that you can use a single joy-con to play, so basically one set of joy-cons is two controllers, just like some other Switch games. It’s really too bad that Capcom couldn’t add online co-op however. 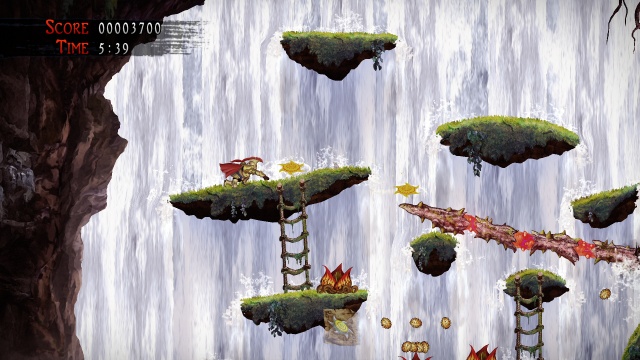 If you own a Nintendo Switch and enjoy platformers, you need this game. It will chew you up and spit you back out with its difficulty, but it’s such a joy to play that it will keep you coming back. Honestly, dying in a GnG should be expected – it’s part of the enjoyment since you learn with each death and eventually overcome the obstacle. For true fans of the GnG series, this game should be like fine wine. To newcomers, I think there is enough option select here to get you used to what the rest of us have been enjoying for years.

The Bad:
- The Red Arremer is stupidly annoying
- Why no online co-op?

Final Rating: 88% - Once again, the Ghosts 'n Goblins series has been revived and this time it can terrorize you at home or on the go.