Werewolf: The Apocalypse - Heart of the Forest Review

Werewolf: The Apocalypse – Heart of the Forest is a visual novel role-playing game developed by Different Tales and published by Walkabout Games. The game is based off the table-top role-playing game Werewolf: The Apocalypse and is part of the greater World of Darkness series (including Vampire: The Masquerade). The game is a mixture of table-top RPG elements along with the usual text and pictures that you’ll find in a visual novel. Overall, the experience is a good introduction to the series, but the overall narrative feels way too short once the pace picks up.

Players take on the role of Maia, a 24-year-old Polish American, that has come to Białowieża in Poland, along with her fried Anya, to find out information on her family’s history. Maia is haunted by dreams of a dark forest along with wolves and bloodshed and feels they are connected to the village. Once she arrives, she seeks out local residents to get tours of the surrounding areas. She eventually finds her connection through her adventures with the locals. 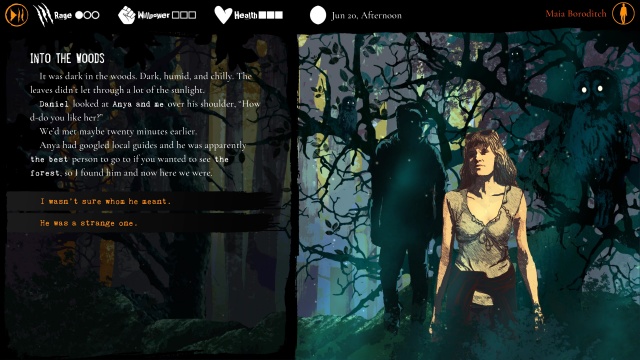 The game tells its tale with text accompanied by still and slightly animated pictures to the side. Players have to read the text but there are many sound effects and some good music to accompany it. The overall sound to the game is quite good. There are many sound effects that help to make the reading immersive as the words appear on the screen (such as howls and other sound effects). The overall soundtrack works well with the game. There are two vocal theme songs that play during the ending credits. The writing is quite atmospheric – it’s easy to visualize the action taking place thanks to the writing.

While reading the text, you’ll get to choose different actions that your character can take to advance the story. Some choices require points from certain attributes (such as courage, heart and rage). Successfully completing some events will add to your attributes. Some situations require certain attributes to be full and they will take place automatically. Sometimes your decisions will lead to the loss of attributes without warning and you can affect the mood of other characters through your decisions as well. The game keeps you informed on the current mood of each character and the paths that you have chosen, as well as goals that you have accomplished in a journal section. 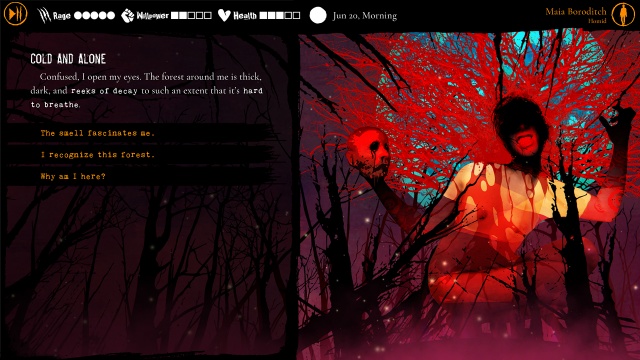 The game has many different paths that the story can take depending on your choices. Depending on how fast you read, the game is around 5 hours long. The images used in the game have a comic book style appearance and some of the pics are animated with extra effects. One problem with the images is that sometimes character pics are reused and I feel that the game could have more images overall. Most of the time, while reading a full chapter, the same image will stay up during the entire chapter. It would help to have different images at times rather than the same image throughout the entire chapter. Sometimes the image will have added effects or smaller images added to it, but the overall image still stays the same.

The overall story is a good introduction to the series, mainly from it explaining the background of the series (the way the world works), but the story is over far too fast. The game starts out somewhat interesting but it is very slow getting up to the good sections. Once the werewolf action starts, the game is already half over. It feels like the game ends too fast after the werewolf sections as well. If you’re into the Werewolf: The Apocalypse table top RPG series, you might find something to like with this game, but it doesn’t really offer enough of an experience with its short length.

The Good:
+ The writing is done well
+ The overall sound is really good
+ Many choices with many different paths

The Bad:
- Needs more pictures (or other visual aid) while telling the stories
- Spends too long with buildup and ends too quickly once it gets good

Final Rating: 70% - Werewolf: The Apocalypse – Heart of the Forest is a decent visual novel but not long enough to make much of an impact for the series.