Space shooters seem to be a severely untapped market these days, with only games like Starlink and a handful of others to cater to those of us who love the genre. That is a far cry from the old days, when X-Wing, TIE Fighter, Star Fox, and the rest represented a huge slice of the gaming market. Hopefully, like the 2D beat 'em up, the genre is coming back, and games like Star Horizon will lead the charge. Sadly, though, in this game's case, a few missteps keep things from reclaiming those mid-90's glory days.

Unlike a lot of space shooters, Star Horizon has a fairly decent story to tell. After a disastrous mission fighting the rebels, pilot John finds himself lost in space, trapped in a ship controlled by an AI that has seemingly lost its marbles. It becomes up to the two to work together to find a way home and even save the universe. Unlike a lot of shooters, the story is ever-present here, with dialogue that ranges from laugh out loud funny to "ugh... seriously?" levels of cringe. Luckily, the story does keep things moving 'til the very end. This is especially helpful as the gameplay can't quite measure up. 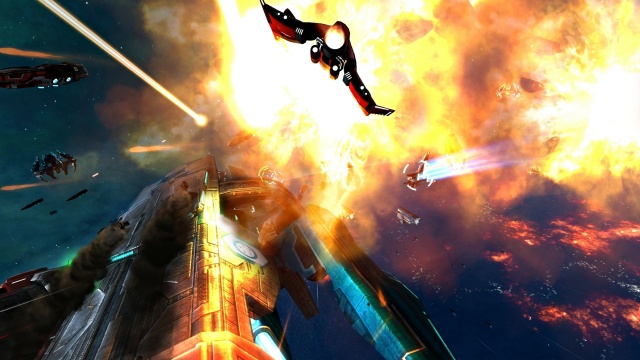 Oh, where do we start here? Star Horizon's first problem is that everything feels like it is moving through molasses. Your ship meanders along its predetermined path at a snail's pace, and only the enemies and lasers seem to be moving at an acceptable rate. Lengths between checkpoints wouldn't feel so spaced out if your ship didn't move at the same rate as a 90-year-old ordering thinly sliced American cheese at the deli counter. As epic space battles with motherships, frigates, and battleships rage around you, your ship behaves like John Travolta in that Pulp Fiction GIF. It feels, for lack of a better word, odd, and detracts severely from what are supposed to be the exciting set piece moments.

As bizarre as that is, it wouldn't be a problem if everything else was on point. Unfortunately, the most important part of a game like this falls short - the aiming and shooting. Like Star Fox (an example everyone can relate to), you move your ship around the screen, targeting and blasting enemies as the game controls the ship's path. As enemies zip on and off the screen, you move the aiming reticule over them and a life meter appears. Then you must simply keep your laser trained on them 'til the meter depletes and they die. Simple right? With no lock-on and enemies moving 5x your speed, the game becomes a chore of simply holding the fire button and trying to keep the targets lined up. This goes from simply annoying at first to straight up not fun. A simple lock-on mechanism could have saved the whole game but sadly, playing Star Horizon is holding the right trigger and moving the left joystick. But even without a lock-on, taking aim at enemies would be much easier if they weren't moving so much faster than you, and also somehow at the same time usually too far away to see aside from the targeting reticule. In games like Star Fox, enemies were close enough to shoot without a lock-on; here everything seems to be eons away, lightning quick, and in big groups, impossible to manage without resorting to special weapons (which suffer from the same aiming issues as the standard lasers). Between this mistake of an aiming system and the snail's pace at which you move through the levels, the entirety of the gameplay feels exactly like playing the game itself - it's aiming at something great, but simply unable to hit the mark. 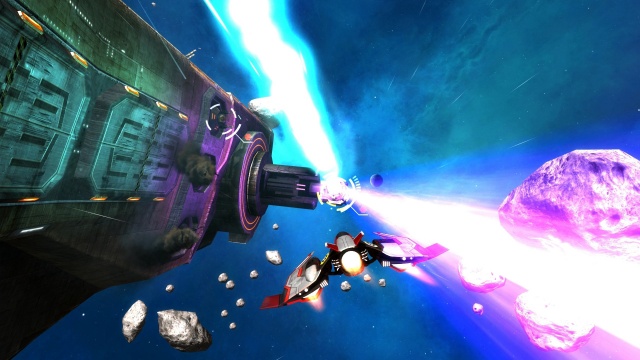 I will say, though, that the game does look pretty great. It invokes the spirit of space shooters of old, with plenty of explosions and lasers fling about, giant ships moving through space, etc. The graphics are crystal clear and the framerate rarely, if ever, stutters. The voice acting from John and the AI are equally impressive, and the other friends and enemies you meet along the way do a nice job as well.

While I appreciate the effort and skill that went into creating a game that throws back to an era that I miss dearly, Star Horizon simply misses the mark. The core of the game - the aiming and shooting - just isn't up to par. Your ship moving at the pace of a mail truck in a crowded neighborhood doesn't help either. While technically competent and somewhat well-written, Star Horizon just doesn't live up to the games it is meant to celebrate, though if there was a Star Horizon 2 on the, um, horizon, I'd sign up for it. The ingredients of greatness are all here, but a sequel with reworked systems could really, really sing.

Final Rating: 55% - It's all good except for the most important part.