Cris Tales is a turn-based role-playing game (RPG) developed by Dreams Uncorporated and Syck, and published by Modus Games. Turn-based RPGs are few and far between nowadays, so it’s good to finally be able to experience one again. The game has your usual turn-based style gameplay along with a few new mechanics. If you’re into difficult RPGs, you’ll probably like this game since it can be quite punishing from the start. It’s like a return to the difficulty of 16-bit RPGs.

Players start out as an orphan girl named Crisbell, who spends her days working for Mother Superior at an orphanage. One day a frog named Matias leads Crisbell to the nearby cathedral to help unleash her time mage powers. Matias eventually takes her to meet Wilhelm, who explains her powers to her. Before long, disaster strikes as Crisbell’s village is attacked under the command of the Empress of Time. After halting the attack, Crisbell sets out to use her time powers to avoid a grim future. 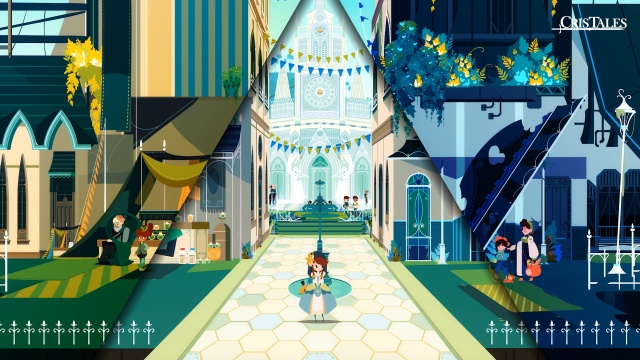 If you’ve played a turn-based RPG before, you’ll be able to fall right into Cris Tales and start enjoying it. You have your world map, towns, and random battles. Crisbell’s time mage power brings in many new game mechanics to the gameplay. During battles, you can use her powers to send enemies into the past or future. This can be used to improve your attacks or lower your enemies’ defenses. For instance, you can cast a water spell on an enemy that has armor then send that enemy to the future to where the water causes a rust condition that lowers the enemy’s defense. It’s fun to try different combinations in order to get creative and expose possible new enemy weaknesses.

While in towns, your time mage powers will allow you to see past, present, and future. There will be a triangle outline in the middle of the screen that will show present and past will be to the left and future will be to the right. This looks really cool since you’ll get visuals of all three time periods as you pass by locations. Not only is it a treat on the eyes, but it can be used to solve puzzles or gain items. You can send Matias into the past or present in order to retrieve certain items that you may need.

Besides Crisbell, you’ll get other party members with their own unique abilities. Other characters basically are there to set up Crisbell’s time mage powers for greater effect. Early on this game is hard! This is the type of game where you’ll find a lack items and character levels early on in the game. You must level up your character and conserve as much as possible early on. Grinding for levels early on is very important. Bosses and even normal enemies can wipe the floor with your party if you are not careful. I consider this challenging gameplay quite nice since I often race through many RPGs that I play with little effort. It’s not the hardest RPG that I have ever played, but it’s harder than your usual RPG that you’ll find lately. 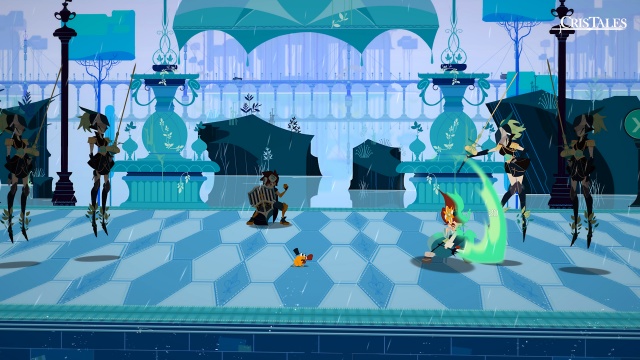 The game has its own unique visual style that resembles a type of Cartoon Network sort of style. The gameplay takes place on a 2D plane with 2D sprites, but you are free to move in the foreground and background as the camera scrolls. The game has an overall beautiful and appealing appearance. It’s highly noticeable that EVERY character in the game is voiced also. Whenever you listen to the main character dialogue or speak to random characters, every line is voiced. The voice acting is pretty good and so are the sound effects and overall soundtrack. 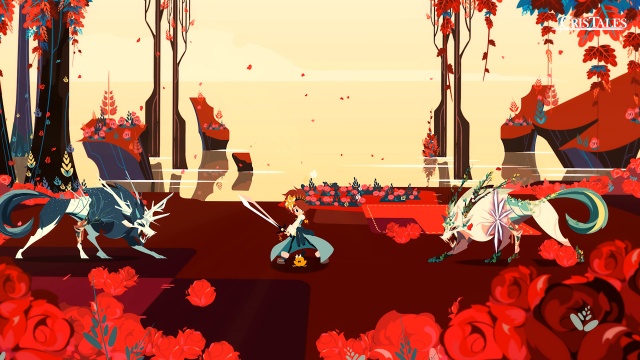 Overall, Cris Tales is a great turn-based RPG for fans of turn-based style gameplay. It’s an impressive piece of work from an indie company and one that I think many will enjoy. The load screens in the game are annoying, but it’s just about the only flaw that I can find since the rest of the game is so good. Old school RPGs fans will find much to enjoy here with the hard difficulty and classic turn-based style gameplay.

The Bad:
- Loading screens as transitions in and out of battles? Really!?