When you've been reviewing games as long as I have (this career can get its driver's license in January, if my math adds up), sometimes you get games that are good, even great, but they just simply aren't your taste. I could rattle off a nostalgic list of games that I reviewed favorably but personally just didn't care for - Halo Wars, Metal Gear Solid: Revengeance, the Pokemon Mystery Dungeon games - I could go on and on. Profane, from AlternativeSoftware, is another game to add to that list. This dual-stick, bullet hell boss rush freak-out of a game is undeniably challenging, tons of fun and frantic as it gets, but a specific design decision keeps it from greatness in my mind. I understand this basic mechanic will sell the game for a lot of people, but as great as Profane is, I'm going to have to add it to my list.

Profane has a pretty good story to tell, not something you expect with a dual-stick shooter, a bullet hell shooter, a boss rush or even an arcade-style game, but somehow this one defies genre expectations and really nails down a pretty decent tale. It is a Lord of the Rings-style story, with ancient beings creating and warring over a set of masks that grant great power. As the different mask-bearers clash and ravage the land, the final mask is found and, well, the rest is as simple as bringing down the bad guys and saving world. A beautiful intro sets all this up, and while the story doesn't factor into the rest of the game quite as much as the beginning, reminders keep you going between brutal battles. Going into Profane blind, I was pretty impressed by the care taken to craft a story that gives the player a reason to deal with the waves of bullets and nigh-unkillable bosses. 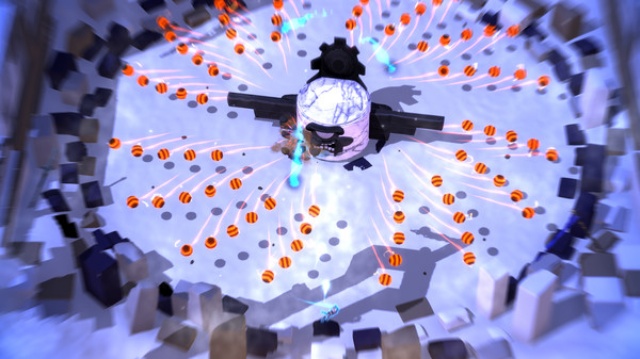 As far as how Profane looks and sounds, its pretty much great across the board. The previously mentioned intro impresses, the in-game graphics are sharp on both handheld and TV play. If I lost any frames or saw any slowdown, even during the most hectic of bosses, I certainly didn't notice. Of particular note is the music, though; it's haunting, stirring, weird, and appropriate for nearly every encounter you have. You won't probably notice it as you run the first little segment and the tutorial boss, but you'll start to see, as you progress, the music really fuels the excitement of knocking off a boss in its final phase while you are inches from death. For a game I never heard of before it hit my inbox, the presentation is AAA quality.

And now we move on to gameplay, we get to Profane's greatest strength while also being its greatest weakness. Let's get to the good first. As a bullet hell, boss rush, twin-stick shooter, Profane pretty much takes the hard lessons learned from other genre games and makes them work. Facing each boss, even the tutorial one, is a massive, hand-wringing endeavor. Every encounter is difficult, but not impossible, giving a very Monster Hunter vibe, especially with the wealth of perks and power-ups you'll earn and equip as you progress through the story. This is very much a game of "get obliterated, get obliterated, learn a pattern, get obliterated, learn a pattern, win" and it succeeds on that front with flying colors. If you liked Ikaruga, Cuphead, or Smash TV, chances are Profane will tap back into those mental reserves and you'll be off to the races. 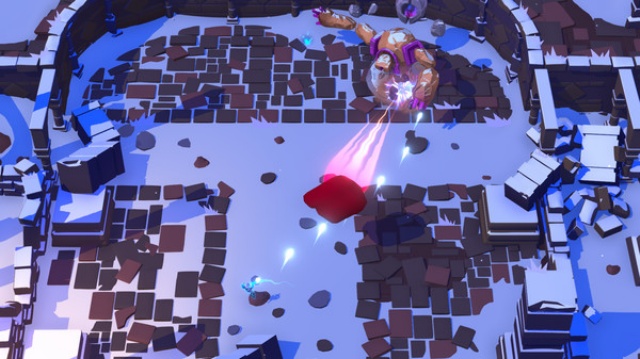 Time, time, time. Time is what hurt my opinion on this one, though I realize that time is what might draw a specific set of players to this title. In Profane, time is EVERYTHING. You're given 3-5 minutes to take down a boss, each with multiple, changing phases, and each hit you take knocks off a few seconds. Even in the eShop description of the game, you'll see the phrase "Time is Everything." There is a subset of players who will time everything, high-score everything, speed run everything, and this is definitely a game for them. I do not identify among their ranks. The time limit felt stifling, even on the "seriously?" side of things, and taking hits that shrink your time to win feels like a cheap shot on the game's part. Even in the tutorial battle, you'll die at least 3-4 times (I promise) not because of being hit too much, but because the clock is running. Being one shot away from a hard-fought victory and failing because you didn't do it fast enough is, and always has been since I started playing games, a huge obstacle to my enjoyment of a game. In a title like Profane, which clearly is meant for a different audience than myself, it felt like a huge middle finger to my hard work and skill. A lot like grading me on how WELL I won (Mario Kart, Bayonetta, games that give you letter grades), I hated being judged not on just my skill, but my speed. Like I said, there is an audience for these "performance" games, but anytime I'm given a time limit or grade based on how well I won a battle, I'm kinda out (I can't even enjoy Mario Kart anymore!).

As much as I loved every part of Profane, the whole "time" thing really killed the entire experience. The bosses are truly memorable encounters, the graphics, story, music and gameplay are all excellent; but the "time" thing... it feels like watching anything past season 12 of The Simpsons. The spirit is there, and it is amusing, but something just doesn't work. In the case of The Simpsons, we don't really know what happened; in Profane's case, we know it was being a slave to the clock that took a great thing and killed it, in this reviewer's eyes at least. There is no doubt that Profane is a good, if not great game, and for a certain subset of audiences, it will be a speed run, ultra-difficult sensation. This reviewer, however, is on to less frustrating experiences.