Jump Force Deluxe Edition for Nintendo Switch is a port of last year’s Jump Force. The original game had two character passes and the Switch version automatically comes with the first pass bundled into the game purchase, so you get an extra 9 characters to go along with the 42 characters already in the main game. The game is a 3v3 arena battle game developed by Spike Chunsoft and it celebrates 50 years of Shonen Jump magazine. The entire roster is a crossover of characters from many different Shonen Jump manga series. 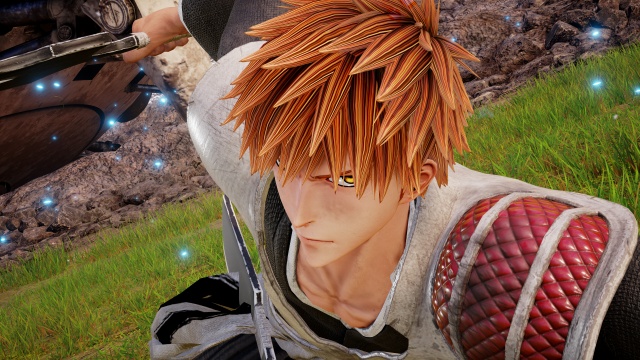 If you’re looking for a review of the game’s content then be sure to check out my review of the original Jump Force here on The Gamers’ Temple, since the majority of the game’s content stays the same. All the flaws are still in the Switch version. The game still has framerate problems when cutscenes get intense just like in the original game. The framerate problems are even worse in the Switch version to the point of skipping frames during some animations. Cutscenes almost always move very jittery on the Switch version. The game is also presented in a lower resolution. It’s very easy to notice jagged edges on fighters this time. It seems that the load times have improved on the Switch version – it’s hard to tell though.

Almost all the flaws are showcased quite well if you play on a TV. If you play in handheld mode, they aren’t that noticeable. Thankfully the overall gameplay doesn’t seem to be affected much. There appears to be a bit more slowdown when exploring the main arena area that you go to in between your battles, but it isn’t all that bad. If you’re playing the game just for the gameplay alone, it basically plays just as well as the original versions of Jump Force.

If you can’t wait to get your hands on Jump Force and you only own a Switch this version is nearly just as good as the other versions. It’s actually impressive that the game didn’t have any dropped content to make it to Switch, but it all seems intact. I would think many Switch owners would play this game in handheld mode, so you most likely won’t even notice that much of a difference in the overall graphics compared to the other systems. The game is nearly no different from the other versions except for a few framerate and graphics issues that are often in Switch ports.

The Good:
+ Combat is solid for the most part
+ Many memorable Shonen Jump characters in the roster
+ Quite a bit of content
+ Portable!

The Bad:
- Framerate is even worse in the Switch version
- Resolution is lower
- Story is forgettable

Final Rating: 55% - The Switch version of Jump Force is overall just a repeat of what we got last year, only this time, it can be portable!