I first heard of Crystal Crisis, the puzzle game from Nicalis featuring indie and obscure characters from across the gaming landscape, from its absolute banger of a intro. The commercial played almost nonstop on YouTube about a year ago, and the animation, coupled with the music, made its mark; as soon as the intro to Crystal Crisis popped up, the memories came back and I was instantly invested. Seriously, that intro might sell the game better than I could with a glowing review. Either way, Crystal Crisis is a puzzle game that might not appeal to everyone for every reason, but the mechanics are as solid as they come for anyone who is a fan of arranging falling blocks.

The characters involved in Crystal Crisis are obviously a selling point. What you'll see here is a list of Nicalis (with some non-Nicalis) all-stars as playable characters. Quote from Cave Story. Isaac from Binding of Isaac. Solange from Code of Princess. Astro Boy from Hot Rod featuring Andy Samburg (just kidding... we all know who Astro Boy is). These characters are iconic, though lesser known than, say, the Smash Bros lineup, but still, the right audience knows exactly who they are and why its exciting to see them in a different type of game. There are around 20 characters in all to unlock (admittedly, I didn't know who about half of them were), and while it IS cool they play a starring role, you'll quickly find out that the difference between characters is often negligible (outside of their special moves). What really sells Crystal Crisis is just how much fun it is to play. 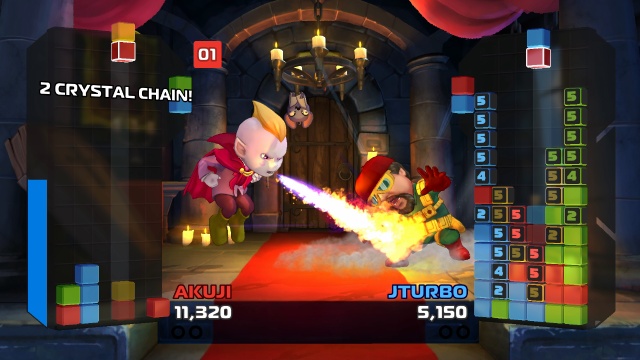 If you ever played Puzzle Fighter, or any of its sequels or spin-offs, you'll be right at home with Crystal Crisis. Crystals drop in pairs of two, and it's up to you to match the colors together as they fall. This isn't Tetris, though; you'll need spark crystals, which drop every few turns, to get rid of the blocks you've built up. Erasing blocks translates to attacks against your opponent, so you'll want to build up combos and lots of like-colored blocks to deal damage. Using attacks tosses useless, unerasable (for a few turns) blocks on your opponent's grid, and the first one to fill up the grid to the top is the loser. The standard Puzzle Fighter mechanics work well here, with a single exception, but there is more to it than just that.

Let's talk about the exception to things working well first. The spark crystals needed to clear blocks simply do not drop often enough. All your careful planning can be tossed out the window simply because you go way too many turns without a single spark. Often, this can make serious matches (especially online ones) feel less about skill and planning and more about who got the decent sparks at the right (and again, not often enough) time in the match. Having success or failure hangs in the balance of randomly dropped items, items absolutely necessary to success, just rubs me the wrong way. It feels like playing Street Fighter, but your attacks only work if some RNG system decides they do... and the RNG is anything but generous. For a game that shines in almost every other way, this little issue distracts and annoys enough to actually ruin some of the fun. 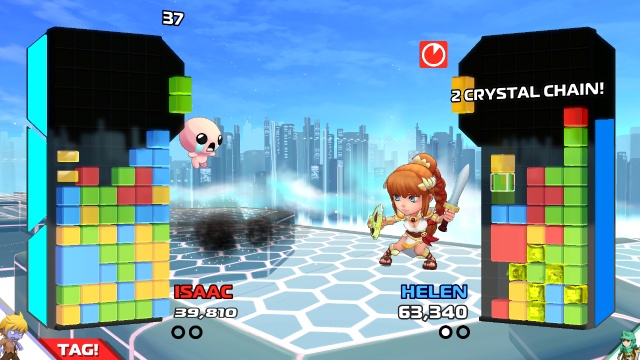 Now, with that out of the way, let's talk about burst moves. Burst moves are specific special moves (each character has different ones) that provide both defensive and offensive perks. Clearing blocks builds up your burst meter and when full, you are free to unleash these on your opponent. These moves are wildly varied across all the characters, with some being truly surprising and effective, but I feel like you should dig them up and see them for yourself. These really cool moves almost negate the bad taste left by too-few spark crystals, and some can even help with the problem. My favorite, and I won't tell you who it belongs to, swaps your entire grid with your opponent's, which throws the entire match into a tizzy. With each of the 20 characters holding unique and often off-the-wall specials, the game encourages you to try everyone and everything to find that sweet spot. As much as the infrequency of spark crystals puts a ding in the game's finish, the burst moves almost, almost buff it out.

As you can probably imagine, there are a bevy of modes in Crystal Crisis, both online and off. There is a cute story mode, narrated by Optimus Prime himself Frank Welker, that helps you build your skills. If you're looking for a deep story, though, look elsewhere; this is another "crystals shattered, everyone chases said crystals" Final Fantasy-esque cookie-cutter tale. It is cool to see the characters from all these different franchises interacting, but don't get your hopes up for meaningful interactions. Each match in story mode essentially starts with the old Simpson's dialogue - "Hey you, let's fight!" "Them's fighting words!" - before the brawl ensues. Story mode here is nice window dressing for solid puzzle mechanics, not much more, not much less. I will say this, though, jumping directly into the story isn't necessarily recommended as there is no tutorial. You'll want to hit the training mode first, which is a good idea anyway seeing as it unlocks a playable character. 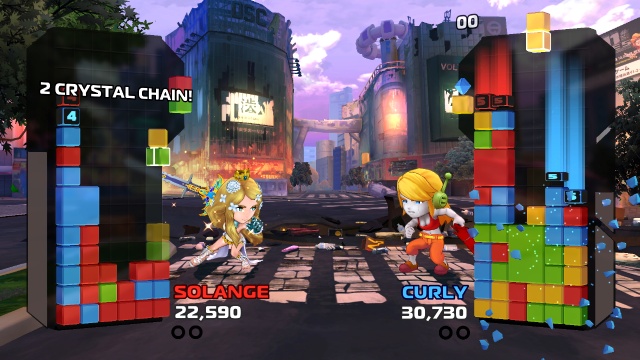 Of course, there is an arcade mode with a number of options and difficulty levels. You pretty much know what to expect here - tag team, survival ranked, etc. - but the real standout is the infuriating and yet somehow amazingly entertaining Memory Mode. Here, the blocks lose color as they fall into place, meaning you need to keep mental track of what is where. As you can imagine, this can get rather insane rather quickly, so I definitely encourage checking it out at least once.

The legs of the game for most people will be the online modes, and even though I'm not much of an online gaming fan, what Crystal Crisis offers is pretty robust. There is ranked and unranked play, a simple vs. mode, leaderboards and even the ability to swap which regional server you are playing on (do NOT hop into the Japan or Asia servers with anything less than the expectation of crushing swift defeat). I found that it was easy and fast to find other players in ranked and unranked modes across all regions, and since this game has been available for some time, it really speaks to the longevity the online modes give the game. 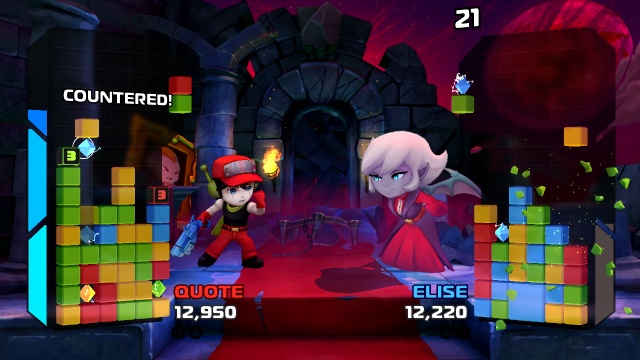 If I have one minor complaint left to get out there, it's that the loading times can be a bit lengthy in places. It's often quicker to jump online and have a match than to wait for a story or arcade match to load up. I'm not talking crazy long loads like a PSP game or something, but they are just long enough for you to notice and say, "Huh. What's taking so dang long?"

As you can probably tell, I really enjoyed Crystal Crisis. The Puzzle Fighter mechanics work great, the cast of characters is awesome (even if I didn't know some of them) and there are plenty of modes and options to keep the game going. The infrequency of spark crystals hurts the fun as much as the burst moves help it, and in the end you have a pretty damn decent puzzler in Crystal Crisis.