Atari has one of the greatest classic arcade game portfolios in the business. It includes Asteroids, Centipede, and Tempest just to name a few of its famous games. These games make a periodic reappearance on video game platforms, both in their original forms and as re-imagined variations on their themes. These re-releases are usually fun to play and stand as a testament to the quality of the originals' designs.

And then there's PONG. It's one of the first games, and as such the gameplay is quite limited. You have two paddles and a ball, and the entire object of the game is to wait for your opponent to miss the ball before you do. There's not much you can do to create a modern take on this and super-charge the gameplay for a champion or tournament edition re-release, so PONG Quest took an entirely different approach. PONG Quest created a world of PONG and put an RPG into it. While at first glance this may seem to be an intriguing idea, the result will most certainly fall short of your expectations. 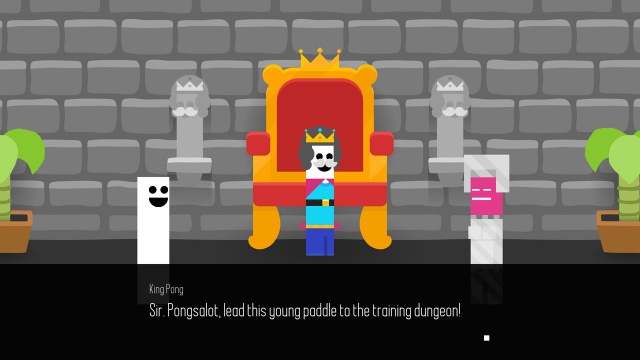 It's good to be PONG King

The world of PONG isn't much of a world. There's a kingdom of beings who look like PONG paddles, but their kingdom consists of a throne room and a hallway with doorways that lead to dungeons. The king has tasked you with entering those dungeons to retrieve a collection of orbs for him, so that he can use them to open the last door in the hallway. The dungeons themselves are barely a step up from those that you'd find in games on an Atari home console in the 1980s - a series of mostly empty rectangular rooms connected by gaps on one or more edges of the screen - with the primary difference between each dungeon being its color palette. Some rooms are puzzle rooms, containing rudimentary mini game puzzles, but most are home to one or more enemy paddles that bounce around the room until you get too close to them. 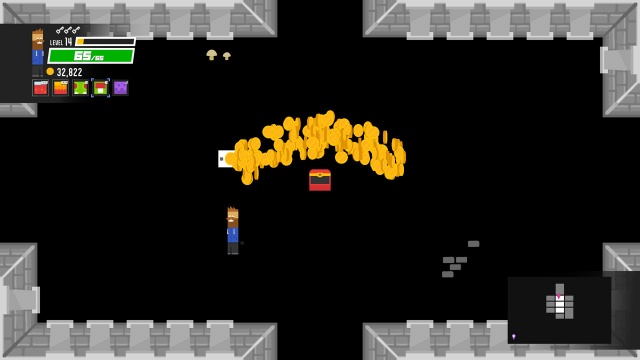 Once an enemy paddle locks onto you, you are taken to a game of PONG to battle that paddle. The rules of the PONG matches in the game have been changed slightly from the original, though. Rather than trying to be the first to reach a set score, each paddle is given a limited amount of health. Each time a paddle hits the ball, or misses it and lets it exit the screen, it loses a bit of its health. Once it's out of health, hits no longer damage it, but the next miss eliminates it and ends the match. This game modification keeps the matches relatively short, which was certainly a design decision because you will play a lot of matches in a dungeon and you won't get very far if you get bogged down in long paddle battles. The downside of this is that the attrition of all of the matches will wear you down since there are very limited opportunities to heal yourself in or between battles. The game takes a rogue-like approach to each dungeon, so the first match you lose will kick you back out to the castle and make you start the dungeon all over again.

Another twist on the classic PONG gameplay that's been added to PONG Quest is the addition of special balls. As you make your way through the dungeon and win matches you'll find a number of these special ball types, although you'll only be able to carry a limited number of different ball types at a time. During a match you can make any of these balls active so that the next time your paddle hits the ball it will be transformed into that ball type. Each one is good for one transformation, so you'll need to carry a stack of them if you want to use them more than once in a match. Your opponents will enter the match with some of their own special balls, and pick-ups periodically appear on the screen that will add another special to the inventory of the player who hit it with the ball. 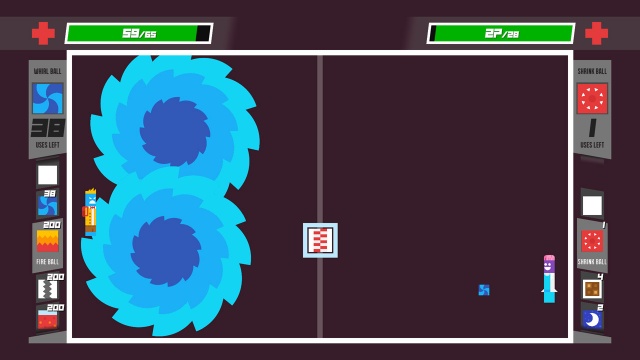 Some of these special balls are genuinely imaginative, and it actually is kind of fun to discover new ones and then try them out in a match. Some are inspired by other classic Atari games, dropping Centipede style mushrooms across the screen that the ball will ricochet off of when hit again or creating a Breakout style wall of bricks that you can safely hide behind as your opponent tries to break it down. There are also annoying special balls as well, particularly the ones that turn the ball invisible or make it move in crazy random patterns. It is more than annoying to have to start a dungeon over because you had the misfortune of running into an enemy with a stack of ghost balls.

Unfortunately, the game's variations on PONG aren't enough to save the game from the same problem of the original - you can only play it for a short time before it gets incredibly repetitive. There were times that I found myself avoiding enemies so that I could just reach the bottom level quickly and get right to the boss battle. If there was more to the game's RPG aspect beyond the occasional leveling up and selecting a minor perk for the achievement, or the different items of clothing to use to change the look of your paddle, it would have helped a lot - building a game around a dull and repetitive arcade game that is dull and repetitive as well only reinforces the core gameplay's shortcomings. And don't get me started on the tightly looped soundtrack that will have you quickly playing this game with the sound off. I enjoy playing variants of classic arcade games because the core gameplay is usually solid, it's what made the games classics in the first place. PONG's fame comes from its historic significance and not its gameplay, and it takes a lot more than PONG Quest offers to make that gameplay fun.

Final Rating: 40% - Too much PONG, not enough something else.