In Other Waters Review

I didn't quite know what to expect from In Other Waters when I started playing the game, but from the game's description, "play as an Artificial Intelligence guiding a stranded xenobiologist through a beautiful and mysterious alien ocean," I imagined that I was getting into something that would be a cross between Subnautica and Shinsekai: Into the Depths. Instead, I found myself playing a game that was primarily a text adventure, although that description implies more control over the story than In Other Waters affords you. The story is well-crafted, but it's questionable as to how much of a game this game really is.

The game's description is accurate in that you do indeed play as an AI, but not in the sense that probably first comes to mind when you think of an AI game character. You're more of an intelligent microcontroller, running the machinery needed to help an aquatic xenobiologist, Ellery Vas, navigate an alien sea and collect samples for study. The entire game is played from an instrumentation console that looks like something that a submariner would hunch over for an entire shift. The sonar-like primary viewscreen contains a topographic map of the sea floor over which are placed small symbols that represent things like alien lifeforms, waypoints, and the xenobiologist that you're responsible for, who appears as a small circle at the center of the display. Placed around the viewscreen are a few sub-displays and icons that correspond to buttons on the Switch's Joy-Cons. The game doesn't provide much help in deciphering what these buttons do, so some trial and error is required before you gain an understanding of what you can and can not control in the game. Vas isn't much help herself, both fully relying on you to perform even the most basic functions for her while simultaneously seemingly surprised that you exist and are there to run things for her. 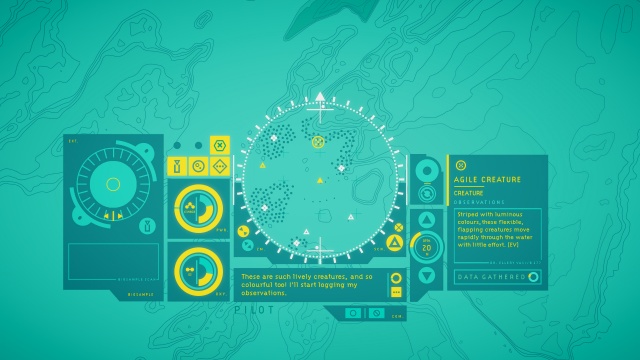 Most of your time with the game, the interactive part at least, is spent aligning the circle that represents Vas with another circle that represents one of the waypoints that you're allowed to move between. Other tasks include scanning and collecting samples from the icons which represent alien aquatic flora and fauna through activities that can only very generously be called mini games. There's not a lot of interactivity or control here - the game's primary objective is to deliver its story to you rather than test your gaming skills.

As you move Vas around the alien ocean and perform scientific tasks for her, she will communicate with you via a text screen at the bottom of your panel. This is the actual meat of the game, reading Vas' experiences in the alien sea and the descriptions of alien life as she conveys them to you. There is some work required to move the story along in that you will need to do things like search an area to collect X number of samples of alien lifeform Y before things progress, but for the most part as the player you're an observer of Vas' experience rather than a part of it. 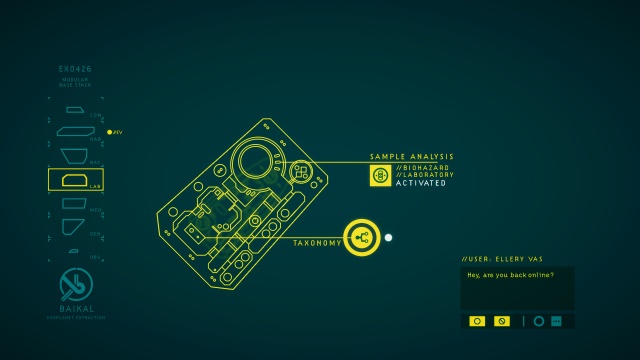 If you enjoy a good story in your games, In Other Waters will deliver that to you, but you'll need to be patient with its slow-pacing and the fact that you'll be spending so much time looking at little icons and lining them up with other icons and lines. It's not that far off from a walking simulator, but the interesting visuals of those types of games will only come from your mind's eye.

In Other Waters is a niche game, and by now you should know whether or not you fit in that niche. If you're intrigued, by all means give the game a try, you won't be disappointed by the story that it delivers. If it all seems like a lot of effort to slowly read a book on your Switch, though, you're best off spending your time in other games.

Final Rating: 69% - A minimalist swimming simulator in which someone else does the swimming.