The Ninja Saviors: Return of the Warriors Review

The Ninja Saviors: Return of the Warriors is a 2D brawler (beat'em up) developed by NatsumeAtari. The game is a remaster of The Ninja Warriors that was released in arcades in 1987 and ported over to the SNES in 1994. The game is a great throwback to old-school brawler arcade titles of the early 1990's. It has a bit more depth than your standard brawler, but never does get overly complicated. If you're a fan of old-school brawlers, this game is definitely for you!

Unlike other brawlers, Ninja Saviors' takes place on a single 2D plane instead of a 3D plane, so you can't step in and out of the background when approaching enemies. Many enemies are noticeably less aggressive because of the playing field. From the start, you get to take control of three cybernetic characters - a Ninja, Kunoichi, and Kamaitachi. Each character is totally different. The Ninja specializes in power and range but he is very slow. The Kunoichi specializes in quick attacks and forward projectile attacks - she is basically the balanced character. The Kamaitachi specializes in spreading damage throughout his surrounding and air attacks - he is the only character that can't simply walk up and grab (he has to grab during his attacks). Along with the three opening characters, there are two unlockable characters as well. 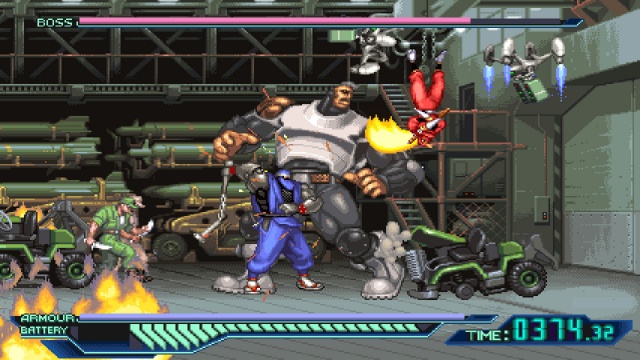 The game has a total of 8 stages and once a stage is beaten it is available for time attack mode. Time attack mode times will be posted on a leaderboard. The game only offers one life, but it will allow players to continue an unlimited amount of times at the cost of end game rank. Checkpoints are found before each boss in every stage. All characters have their own unique attacks and there are a few hidden attacks that aren't listed in the manual - for instance down + jump will give you an extra attack. The game has your standard attack, jump and special move buttons. The controls are very easy to work with.

Each character has a special meter that will build up over time and once it is built up a certain amount, you can perform a powered attack by holding up and pressing attack - some character have a powered jumping attack also. There is also a fully charged super move that will clear all standing enemies. Whenever you get attacked and knocked down, you lose all your special meter unless it is fully charged already. Characters can block by tapping and holding the attack button to guard against attacks and projectiles. The game has 2-player local co-op but no option for online co-op. As usual, being a beat'em up, the game does get repetitive, but that is always one flaw that comes to being a beat'em up.

Each stage is full of weaker enemies that simply walk forward and knife slash your character and these enemies can be taken down with one hit then you have your stronger enemies that are capable of taking more damage and some that can shoot projectiles from long range. The enemy variety is quite good and you're constantly running into new enemies as you progress through the stages. Every stage has its own boss with a certain gimmick as to defeating it. Bosses can either be smaller enemies that get help from other enemies or room-filling behemoths. The game is full of colorful sprite beauty just like you would find in 1990's arcade and Neo Geo titles. The overall sound is also great - both the soundtrack and overall sound is very fitting. The sound of impact from punches and slashes makes the attacks more fulfilling. Overall, the game isn't all that hard, but it certainly has a rise in difficulty for the final boss (because of his gimmick). There is also an unlockable hard mode if the standard difficulty is too easy. Even though the game does have a checkpoint system, it has no save system, so while going through the main story, it all has to be beaten in one sitting to get credit for completion. 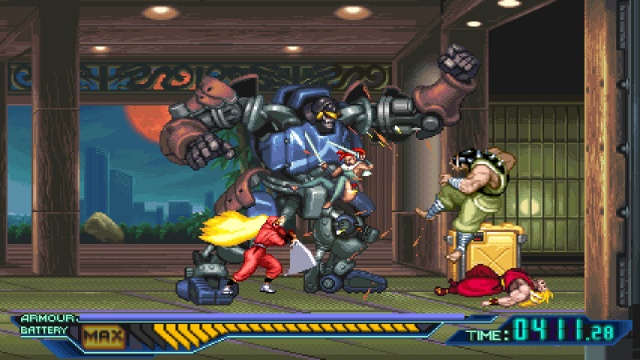 The Ninja Saviors: Return of the Warriors is a very solid brawler for those that are fans of arcade beat'em ups such as Final Fight, Double Dragon and other popular brawlers. At first glance, Ninja Saviors looks like a SNES game, but the animation is much smoother than you'll find on SNES. The game is basically the ultimate version of the original The Ninja Warriors arcade with added moves and other enhancements (such as extra characters). I found the game very enjoyable and it has some good replay value with its unlockables and extra difficulty.

The Good:
+ Fantastic arcade brawler
+ Each character is quite unique
+ Overall sound is good

Final Rating: 80% - The Ninja Saviors: Return of the Warriors is a solid enhancement to its original arcade counterpart and SNES port.