Zombie Driver is a vehicular combat action game developed and published by Exor Studios. The game was first released in 2009 for Android and then was re-released in 2012 for the major consoles and PC. The latest version entitled "Zombie Driver: Immortal Edition" was recently released for Switch. Immortal Edition includes all the DLC that has been released for the game thus far. The game is quite addicting and an overall impressive indie title.

Players only start out with a taxi and then other vehicles are unlocked while progressing through the story. The game has a Story mode, Blood Race mode and Slaughter mode. Upgrades do not carry over between modes - each mode has its own separate unlockables. Story mode is the main meat of the game and where you'll likely dedicate most of your time. The story mode takes players through several stages while performing main and secondary objectives. 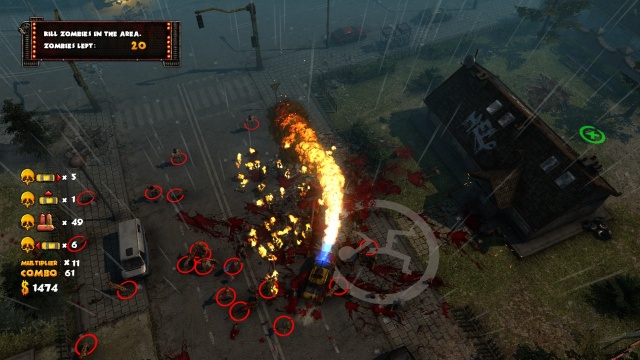 Objectives include picking up survivors from a designated area, defeating bosses, clearing a certain area along with other types of goals. The game also throws in some secondary objectives that you can perform for some extra cash. After performing all objectives, you'll have to meet up at a certain safe house in order to complete the mission. No matter what objective you take on, you'll be driving through and battling tons of zombies. It's very noticeable how well the framerate holds up in this game even with all the carnage that takes place on the screen at times. The framerate is constantly smooth, even during raining stages.

Zombie Driver starts out relatively simple then the difficulty ramps up as the zombie hordes increase. The variety of zombies will increase as well - you'll be fighting bigger zombies and some zombies that explode that can highly damage your car when in close range to their explosion. Thankfully, you can upgrade your car and buy extra weapons. Besides a taxi, the game gives you a sports car, a limo, a big truck as well as other vehicles. Each car has its own attributes, such as higher defense for the limo. As the game carried on, I found myself constantly sticking with the limo for its higher defense since the zombie hordes greatly pick up in later missions.

You get access to machine guns, flamethrowers and rocket launchers to destroy hordes of zombies from a distance while driving. Killing hordes from a distance becomes much more helpful once you start to run across bigger zombies and exploding zombies that are in hordes since they will damage your vehicles greatly if you ram into them. Weapons must be bought and then they will appear in certain locations on the world map. Power-ups appear most often off the main roads - in alleys and small roads. 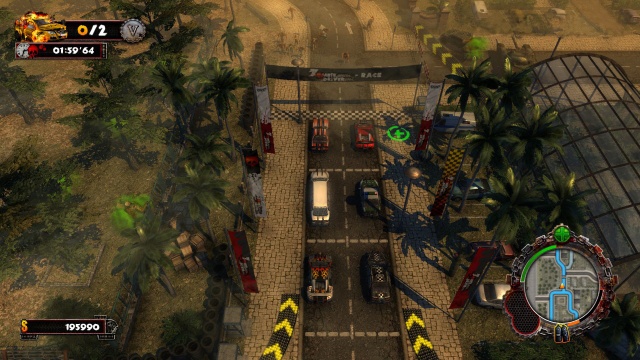 Blood Race mode allows players to race against CPU-controlled vehicles in a race around the city. While racing, you gain access to weapons that you can use to damage and destroy other vehicles. Once a car is destroyed, it will respawn shortly. Slaughter mode is a survival mode where the main objective is to kill as many zombies as possible before they destroy your car. The mode gives you limited power-ups as time goes by - including health and weapons.

The game is a lot of fun and its perfect for a system that can be used in handheld mode. This is the type of game that you'll definitely want to take on trips for some fast pick up and play type of action. Zombie Driver gets repetitive at times, but it's always fun to come back to. It's definitely a worthy pickup for shooter fans and fans of vehicular combat. I'd also recommend this to Dead Rising fans since it provides a similar type of zombie killing addiction that Dead Rising offers - only without the melee weapons and dress-up of course.

The Bad:
- Blood Race mode is rather forgettable
- Not much replay value once everything is unlocked