(Author's Note: This is my first review written in nearly two years. Bear with me on this one, boys; I might be a bit rusty).

Blasphemous, by Spanish indie developer The Game Kitchen and publisher Team17, is a revelation. Sure, it came out earlier this year and this review is severely late (though, bonus, the game is often on sale - depending on when you read this, there might be a great deal on an already-underpriced title!), but this is more of a "call to action" than a "I've seen this game pre-release, tell me how it is" kind of thing. If you've ever taken a shine to tough platformers, darker games with mature themes, or any Metroidvania title of any kind, Blasphemous is the next game you need to download right this minute.

The story here seems to follow the somewhat intriguing and often frustrating path of other "lore deep" games these days; you'll be following it on the surface through the game, but diving in, reading item descriptions, exploring the landscape, and talking to each and every NPC can really open things up. You play as "The Penitent One" a warrior in a long line of failed warriors, in a battle against "The Miracle," a nebulous event/entity that seems to have saved/doomed the entire population of the region of Cvstodia. You awake on a pile of slain warriors, doomed to attempt the same task they failed at; destroy The Miracle. It's a tale deeply rooted in Spanish Catholicism and, even for an action-based game, it never lets up. You'll constantly be reminded of this desolate landscape, the horrible creatures within it, and how all were created by this otherworldly destroyer that those left still seem to somehow worship. And seeing as it is now your job to end it, you'll be seeing some stuff that clearly lesser warriors couldn't handle. 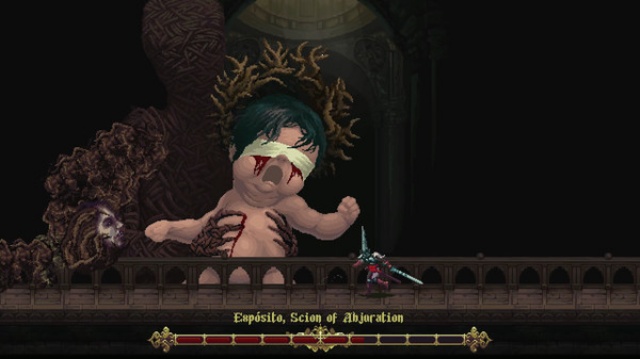 What Blasphemous does right here is that you can get as much or as little story as you like while you progress. If you want to see the handful of cutscenes at the beginning, middle, and end of the title? Cool. Want to delve into the lore, complete every sidequest and really deep dive into this world? The game is equally rewarding, when it comes to the story, for both kinds of players. Personally, I went full action game on my first playthrough, and for 100% story/sidequest completion on my second. The latter method comes more highly recommended, but this is a game that can be played over and over, so... however you want to enjoy this masterpiece, you do you.

(Author's note: The Game Kitchen and Team17 have announced that free DLC is coming this year. I would advise against waiting for it, though; enjoy the game as it is now and get excited in a few months for more!)

When it comes to how the game looks and runs on Switch, I have zero complaints. Blasphemous is a top-tier, pixel-art masterpiece with animations that will make even your favorite old-school games (and honestly, your new-school ones as well) look almost silly in comparison. Watching The Penitent One in action is a joy; his running and attack animations are fantastic, and as you master more techniques (more on this later), you almost get excited to see him move and fight in new, exciting ways. The enemies and bosses are equally well-animated and designed, with bosses big and small being the stand-out. I dare any single player to soon forget an encounter with a massive skeleton being held aloft by disembodied hands, or a screaming, blindfolded infant hurling attacks at you from the background. Blasphemous holds some seriously memorable sequences, and all look and move beautifully. 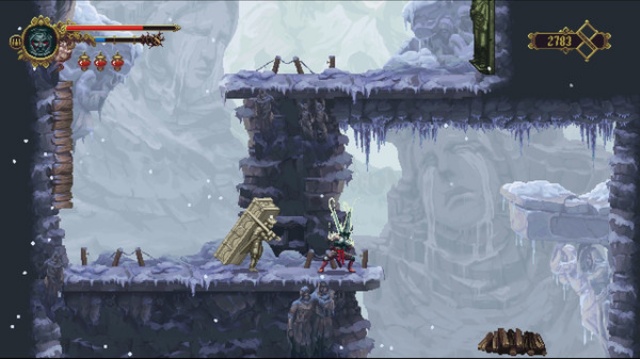 Since I'm apparently in the minority that doesn't care a whit for resolution and framerate, I'll simply say the game looks great in both handheld and on the big screen, and I encountered precious little slowdown on my first run through, with even less on the second (a patch was introduced in between my two playthroughs that cleaned up some bugs and other issues). That's pretty much all I'll say about that.

Moving on to what ACTUALLY matters in games, we have to talk about how Blasphemous plays. If you've ever played a 2-D platformer or a Metroidvania title before, you'll pick up Blasphemous with no problem whatsoever. The Penitent One runs and jumps in platforming like Super Metroid or Hollow Knight, with found upgrades adding to his repertoire of abilities along the way. While you only start with a single, basic sword combo, soon you'll have multiple combos, special attacks un upgraded abilities that open up the game's world and make you a far deadlier warrior than you awaken as in the beginning. The classic Metroidvania formula here is mixed in with the "all-the-rage" Dark Souls formula; if you die (and you will), you'll need to backtrack to your corpse to regain your lost currency and restore your magic meter. Honestly, this system isn't my favorite as backtracking long distances across extremely hostile territory isn't often that much fun. Add to that the fact that save spots in this adventure can be few and far between. This can be problematic as you explore huge new areas with no clue where to go or where the next respite lies. Honestly, this isn't an issue that lies on Blasphemous' shoulders' alone; the previously mentioned Hollow Knight and Dark Souls series also employed versions of this system and it wasn't too much fun their either. Great games, one and all, but a half-hour journey you've done eight times to get murdered by a boss over and over while you figure out its patterns... I'll do it, but I won't enjoy it (insert old man shaking fist at cloud). 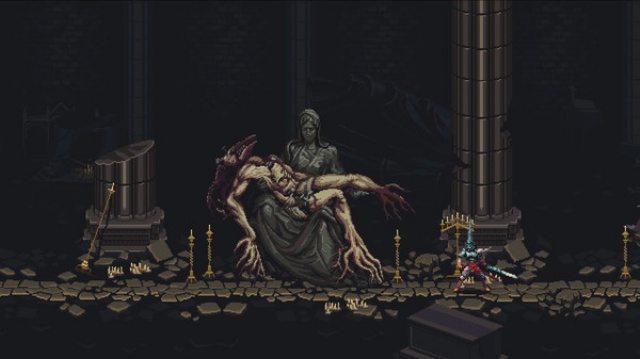 What makes Blasphemous my choice for GOTY2019 (beating out DQXI and Bloodstained) isn't one thing in particular. Its not the music (which is fantastic, by the way), the animations, the story, the bosses, the atmosphere... its all of it combined. The backtracking keeps Blasphemous from being another perfect 10 (I've given out 5-6 over the years), but this is an excellent indie title that I recommend to just about everyone who likes video games. Look, we are all stuck inside these days, why not escape to the land of Cvstodia? If nothing else, the conditions there make the current pandemic and quarantine look like waiting in line at Disney Land.

Final Rating: 97% - Blasphemous is a gothic horror masterpiece that can't be missed.