Overwatch has been around a few years on PC and the PS4 and Xbox One consoles, and now it has found its way to the Switch making the team-based, hero-class shooter portable for the first time. Sort of. You'll still need an internet connection to play the game as there are no offline modes available. Try to play it offline and you can't even make it through the opening cinematic without the game reminding you to check your internet connection every ten seconds. And you'll need a good connection, as well. Hotel Wi-Fi lag can lead to a frustrating death or getting dropped from a match. So this is a portable shooter that you'll need to play docked or tethered to a good connection.

If you've ever played Overwatch on another platform, it will all be familiar to you on the Switch. All of the game modes, heroes, events, and extras are here, although you'll find that the extensive stats that game tracks are tracked separately by platform. For those new to the game, it's a team-based shooter in which you choose to play as one of 31 heroes divided into three classes - Tank, Damage, and Support. While each hero has the characteristics which define its class, each one is unique to play, with their own weapons, abilities, and specials. The characters have all been imbued with unique personalities as well, so don't be surprised if you find yourself gravitating towards a couple of heroes because you like their style as much as you do their abilities. All of the characters and abilities are drawn from a range of fantasy and Sci-Fi themes, so you'll controlling or facing characters as diverse as an intelligent hamster who pilots a wrecking ball to a cowboy to a pro gamer piloting a mech to a bow-wielding ninja. If you're looking for a military shooter, then you definitely have not come to the right place.

There are customization options available for the heroes - skins, sprays, voice clips - but they are distributed at random by loot boxes. You'll earn loot boxes here and there for doing things like gaining a new player level or participating in an event, but it may take some time before you get a few items for your favorite hero. You can, of course, spend as much as you like buying loot boxes. 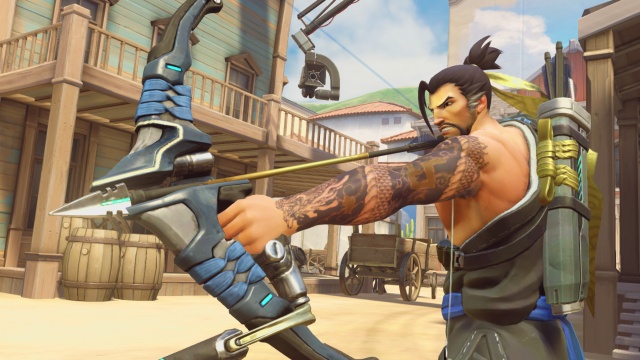 Your progression is not tied to individual heroes, so you can switch between them without penalty, and can even change heroes within a match when spawning if you'd like. There is a practice zone that will let you try out any hero and get used to their weapon and abilities which is great because there's nothing worse than having someone shooting at you while you're trying to figure out what each button does. You can then take your practice to the next level in matches versus bots. It's disappointing that these modes are not available to you when you're offline, because the downtime between hotspots would be a great time to play around with a new hero.

The matches are objective-based battles played on a variety of maps inspired by locations around the world. Each team has a safe zone on the map from which to spawn unharassed, and there are numerous paths to choose once you leave the safe zone. The objective-based gameplay naturally draws players to the objectives, so encounters with enemies elsewhere on the maps are not nearly as common as they are at the objectives. Success is dependent on teamwork and players fulfilling the role of the class that they are each playing. Even in this case things can become chaotic in a heated battle, especially when more than one player is unleashing their character's special attacks, but that's part of what makes Overwatch fun to play. If you happen to find a group of players that work well together in a match, the game will give the players the option to stick together as a team for the next match. Each match ends with a "play of the game" replay and gives players the opportunity to vote to award accolades to players on either team.

Playing a shooter that requires the degree of control and responsiveness as Overwatch does can be a little frustrating using the Joy-Con controllers. Aiming is just not as precise as it is on other consoles, let alone PC. If it's any consolation, other players will be struggling with the same issues that you are, but it is still annoying to deal with imprecise aim control. There's an option to use motion controls to play the game, but these are more of a novelty than a serious way to play the game competitively. 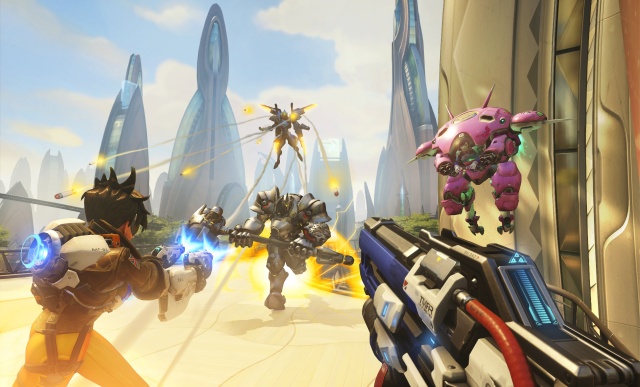 Graphics-wise, Overwatch looks better and runs smoother on other systems than it does on Switch. You won't notice the graphical downgrade as much when in portable mode than docked and playing on a TV, but in either mode you'll still have to contend with slowdown issues when the action on-screen gets a little intense. The Switch hardware definitely struggles a bit to run Overwatch, even at the lower resolutions supported by the Switch.

If you want to play Overwatch, the Switch shouldn't be your first platform of choice, and if you're looking for a way to play Overwatch on the go, you're still going to be limited to high-speed access points. Imprecise controls and graphical slowdowns are other issues that you'll need to contend with, but at its core the games is still a fun team-based shooter, and if the Switch is your only option to play it you will probably have fun with it overall.