Darkwood is a survival horror game developed by Acid Wizard Studio. This is my first time with a survival game that plays similar to Don't Starve and I must say that I do enjoy this style of game. Darkwood encourages constant survival in a world that has a very uneasy overall feeling to it. If you are a fan of survival horrors such as Silent Hill, Darkwood is definitely worth a shot since it has the same sort of atmosphere. Just like Silent Hill, Darkwood does not rely on jump scares and tries to creep out a player with overall horror atmosphere.

After the prologue, you work your way out of a room of a cabin and must explore your open world surroundings and collect items in order to assist you in fortifying your house and upgrading your character. The game has objectives and an actual story but it does not hold your hand by telling you exactly what to do. You have to advance through the story through the use of hints that vaguely point you in the right direction. The game has some slight puzzles such as combination locks and you'll face off against several types of enemies while exploring the world. Even though the game does not have jump scares, it did freak me out in a few areas just from overall creep factor alone. Once you die, half of your inventory is taken and you'll revive but you'll have to track down your remaining inventory from the point where you died on the normal difficulty. On hard you have a limited number of deaths you can take and on Nightmare, death is permanent and you must restart the whole game! 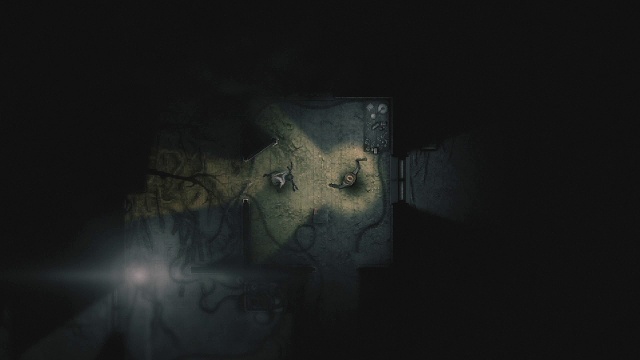 The game keeps track of time and will shift from day to night each day. The horror atmosphere truly sets in when night comes. You simply cannot stay outside during night because you'll die fast from enemies. Whenever night starts to come, the game will warn you by the character mentioning that he must get back home. You must board up windows and start your generator to power the lights in your house to prepare for night. Once night is upon your character, all is silent and you can hear footsteps outside the house and doors might randomly open. Sometimes enemies from outside will actually come into the house so you have to prepare to do battle. The game cannot be fast-forwarded through night sequences, so you have to hold your own at night and wait for dawn to come.

Darkwood has some really great sound to it. The sounds of night are some of the best parts of the game since it left me tense quite a few times. The creaking of doors and sounds of rustling outside are great. Whenever morning starts to come, there is loud build-up of sound as you are about to be freed of all danger with the light of day - it's truly fantastic. The game also has some great light manipulations for light escaping from windows (through boarded cracks) and overall illumination from light in dark areas.

Every morning a merchant will come to trade items with you. You can give him items to build up points to purchase items from him. The game has some strange controls for using items that are easy to forget and the game doesn't always do a good job of explaining how to use some mechanisms and items. It took me a while to understand how to use the wood saw outside the house to make boards and I never did quite figure out how to use matches in order to start a fire from poured gasoline. The game gives you many options to approach certain situations that make you think. For example, you can use a torch to burn away poisonous branches in a house or you can pour gasoline on the floor and burn it with a match or you can toss a Molotov at it. You gain access to melee weapons and guns as the game progresses - all of these are limited in supply and the melee weapons will break. 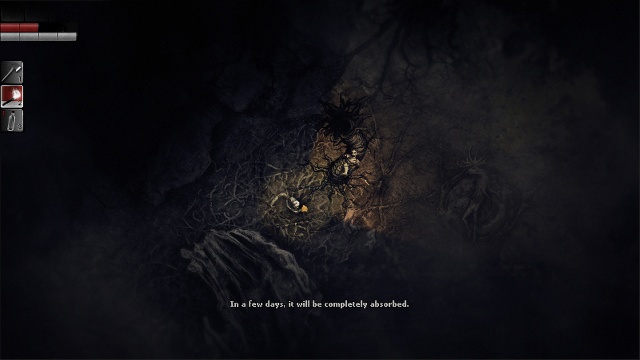 Darkwood was just recently released on the PS4 (which is the version this review is based on) and it is also available for Switch and Xbox One. I got a chance to sit down and try out the Switch version as well. The Switch looks great while in handheld mode - I was worried that the small character and small text would be too tiny in handheld but everything looks fine while playing in handheld. When docked, the game is noticeably a hazier than the PS4 version (probably 720p) mainly whenever light falls over an area. Other than the lower display while docked, the Switch version looks nearly identical to the PS4 version and you have the advantage of playing it in handheld mode, which really fits this type of game! At its bargain price, the game is really a steal on whichever platform you choose to buy it on. Darkwood is definitely a game that survival horror fans should try for both the horror atmosphere and some great in-depth survival gameplay. The game can get truly addicting.

The Bad:
- Some of the controls and menu operations are confusing
- There is a bit of a stutter in gameplay when moving around the map at times