It's taken a little while, but the Switch finally has a Star Wars game, and one that delivers a large cross-section of the Star Wars saga. Star Wars Pinball gives you 19 Star Wars themed tables drawn from the films, TV series, and iconic characters and locations from the Star Wars universe. There are tables dedicated to Episodes IV through VIII, as well as Solo and Rogue One, and the Clone Wars and Star Wars Rebels series each get their own table, too. Darth Vadar, Lando, and Han all get their very own tables, but some tables must be shared by enemies like the Jedi vs. Sith and X-Wing vs. TIE Fighter tables. You may not end up loving all of the tables that are included in the game, but you'll probably have plenty of favorites that you'll keep returning to play. Zen Studios has taken care to give each table its own character, so none of them really play too much alike. Star Wars fans will appreciate the inclusion of original music from the saga, as well as sound effects taken straight from the films. On the other hand, the voice samples do not feature the original actors, so it can be a little strange to hear familiar characters speaking iconic lines while sounding a bit different than themselves at the same time.

The tables feature the most realistic physics you'll find in a video game recreation of the game. The ball feels like it has the weight of a real steel ball and moves across the table with realistic speeds and ricochets rather than following predetermined paths. You'll have full control of the ball as you play it off the flippers, and any drops or missed shots will feel like they are entirely your fault rather than some glitch in the programming. The game has a number of different view angle options that you can freely switch between while playing a table, so you'll have several options to strike a balance between seeing things closer up versus getting a view of the table as a whole. In portable mode you can also switch the game to a portrait orientation and play with the Switch rotated 90 degrees, a more natural way to view a pinball table. It can be a bit awkward to hold the Switch in your hands when playing the game this way, so you'll usually be restricted to playing in this orientation only when you can prop up your Switch on something. 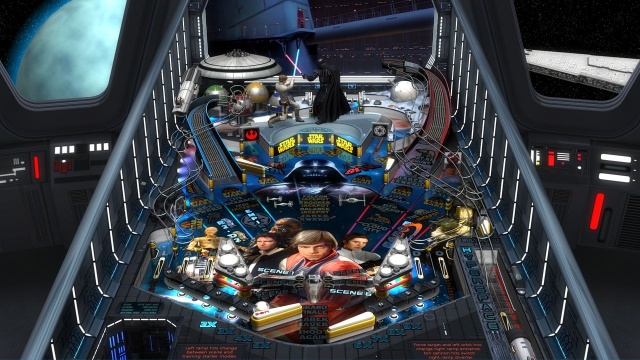 The tables walk a line between realistic pinball tables and video game fantasy. They include everything that you'd expect to see in a pinball game, bumpers, ramps, skill shots, spinners, and the like, but they also include 3D characters who will move around the tables, reacting to the action or playing roles in special missions. Each table has a number of special missions, and it pays to spend a few minutes reading a table's notes before playing it for the first time. If you're impatient, though, you'll be able to figure things out eventually on each table because nothing is really that obtuse and you'll receive information while playing from the "backboard" display.

While you can play any table at any time in a traditional round of pinball, the game also has a number of other modes available. First, there are actually two ways to play each table in single games. There's traditional classic play in which there are no game modifiers or score boosters, just straight-up pinball. You can also play the table with boosters enabled, Force Powers that give strong but temporary bonuses, and Talents that boost some aspect of the table such as increasing the time during which the ball save remains active. You can customize these loadouts to your liking and to fit your play style, unlocking and upgrading them using the Holocrons that you earn in the game's campaign mode.

The campaign mode is series of challenges, each set on a particular table with a given game modification. One might have you trying to get the highest score you can within a certain time limit, while the next may limit the total number of times that you can hit the flipper buttons. Each of these challenges has three goal scores, each of which earns you a Holocron when met, although you only need to reach the first goal to advance to the next challenge. It's a fun way to get a glimpse at all of the tables, and the varying goals will challenge you to adjust your game each time. It's also a good for when you only have time for a bite-sized chunk of pinball play, a nice option to have available when you're playing the Switch on the go. 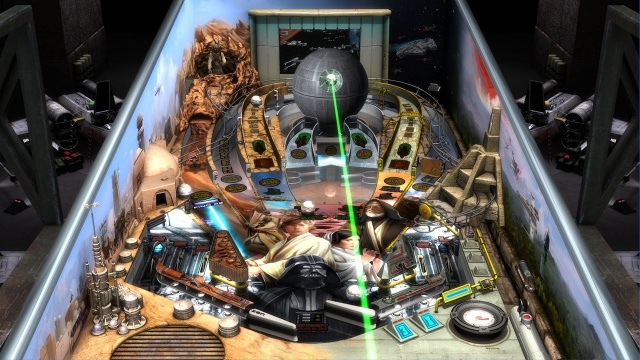 Tournaments provide another way for you to challenge yourself with play variations. Anyone can create a tournament, setting the table, rules, access, and length of time the tournament will remain open. Conversely you can browse the open tournaments at any time, looking to enter any that pique your interest. When you do you'll play a game using the tournament's rules and your score will be uploaded when you're done. There's no head-to-head competition, so you can play whenever and as often as you'd like while the tournament remains open. In addition to tournaments, there is also League Play in the game. This mode instead focuses on cumulative high scores on different tables among friends. You can also play with your friends on a single switch, passing the Switch between players when it's the next player's turn.

While Star Wars Pinball is all pinball, the number of available tables and modes make for a good variety of gameplay. It's a perfect game for the Switch, providing you with bite-sized to hours long play while on the go, and connected play options while you're at home and logged into your WiFi. The game is a real treat for Star Wars fans, but even those with only a casual interest in the saga will find themselves enjoying the excellent pinball action.

Final Rating: 90% - The Force is strong with Star Wars Pinball.