Mini Metro is a puzzle game inspired by subway systems, and like subway systems the basic goal is simple - get people to where they want to go. The design of a real subway system is a very complex task, but Mini Metro distills it down to the very basics and this is what makes it such a good puzzle game. The rules and goals are simple, but they make for a surprising degree of challenge.

Mini Metro levels are set on small maps the size of the screen. Each one begins with a group of three stations that need to be connected by rail lines. The stations are represented by simple shapes, as are the icons that represent passengers that appear at the stations. The goal is to create a subway network that can get each passenger to a station that's the same shape as the passenger. If a station becomes completely filled with passengers waiting for a train, a countdown timer begins and if the station can't be brought under capacity by the time the timer expires, then you'll fail the level. If you manage to move a number of passengers greater than the threshold for the level, you'll clear it and unlock the next one in the progression. You can continue playing past that point, though, as the game will save your best passenger counts for each level. 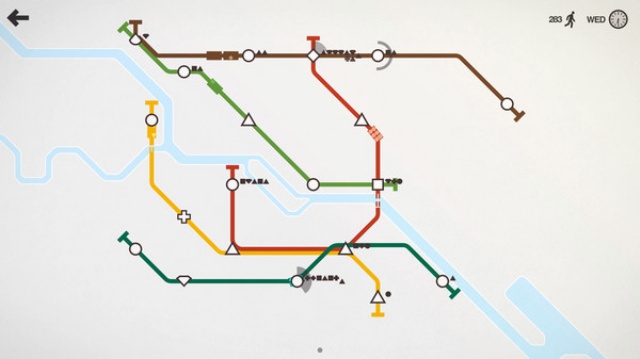 The challenge in the game is that as time progresses more stations are added at random, but your resources to serve the growing transportation network are limited. You can only create a limited number of rail lines, so you'll need to be careful that none of the lines are too long for the train to service all of the stations before passengers overcrowd a station and that each passenger can reach a matching station no matter which station they start from. You'll need to be careful about selecting which stations serve multiple lines as well, as an overburdened hub can quickly become overwhelmed with passengers waiting to switch lines. You'll also have a limited number of trains at your disposal, so you can add multiple trains to one line as an option rather than assigning each to a separate line. You'll also be limited in the number of tunnels you can build across water, making reaching stations on islands or the opposite side of a river more challenging. There are also resources available that can help your network operate more efficiently such as extra rail cars and high-speed trains.

At certain regular time intervals the game will award you with new resources to continue to expand your system. Often, you'll be given a mutually exclusive choice, say between a new high-speed train or a new tunnel, so it's a good idea to be aware of your network's deficiencies and what you need to do to correct them. Each level has its own unique challenges, such as extra waterways, a greater frequency of new stations, or long hauls between stations, so what worked in one level may not work so well in the next.

If you make a mistake or circumstances turn your once efficient metro into a mess, all is not lost because nothing in Mini Metro is permanent. You can reroute lines at any time, even tearing them down to nothing and rerouting them from scratch. Even tunnels and bridges can be taken down and moved elsewhere as needed in an instant. You can do all of this in one of two ways - the game fully supports the touch screen interface or you can use the controllers to move a pointer around the screen and press a button to perform context-sensitive actions. I found the touch interface to work more intuitively and easily while the cursor-based controls were a bit awkward, although there were times when it was difficult to select the right action in a crowded spot using a finger. This means that the game plays better as a portable game, which is fine since it really is suited for this role. Sure, the game is challenging and fun while you're sitting on your couch, but it's the perfect time-killer when you're away from home. The simple rules that lead to a surprising depth of challenge will make it easy to while away the hours on a long flight.