With everyone's eyes on Fire Emblem Warriors, the latest musou (i.e. Dynasty Warriors) spin-off game from Nintendo, you may have missed the fact that it will be the second game in the genre to hit the Switch. The first, Fate/Extella: The Umbral Star, a PS4/PSVita port based on a popular anime/manga, came to the Switch a few weeks ago, largely flying under the radar. Is Fate/Extella a good way to pass the time until Fire Emblem comes? Or should you just skip and (try to) be patient? Well, while the game does have a few stumbling points, its overall a very good entry in the genre and would be a worthy purchase for those wanting a little something different on the Switch.

I'll preface with this; I usually start my reviews with a discussion of the game's plot and storyline, but Fate/Extella's plot, I assume because I didn't watch the anime, is complete incomprehensible nonsense. I'll do my best to lay it all out here, but there's a good chance you'll be as confused with my description as I was with the game itself. The game starts with you and your servant winning a battle called the Holy Grail War, though it isn't long before a giant monster knocks your block off. You wake up with amnesia (of course) and find out SE.RA.PH., the organization that runs things in crazy town, has been half taken over by the evil Castor Tamamo and a servant who looks exactly like you. So you and your servant, Emperor Nero, set to reclaim SE.RA.PH, defeat Tamamo and save the world. Or the moon. Or some computer simulation. Honestly, I have no idea. As you progress further into the game, things make slightly more sense, but the overall plot is almost 100% unintelligible. Again, I assume if you know the anime/manga you'll be fine and able to follow every plot point, but for the uninitiated, following the story is a lot like trying to watch Twin Peaks in reverse order - you won't have even an inkling of what's going on. 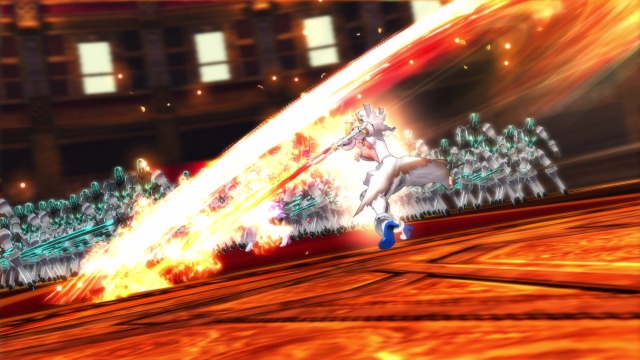 Now that we have that confusing mess out of the way, let's get to how the game actually plays. What you have in Fate/Extella is basically Dynasty Warriors, only high on speed. The pace of the game is at least twice that of any other musou game I've played and that is actually a pretty good thing. Like other musou games, your objective is to kill as many bad guys as possible while protecting your bases from oncoming hordes and eventually fighting bosses to reclaim your territory. The objectives in Fate/Extella are a bit different than others in the genre; instead of simply capturing or defending certain bits of the map, you'll need to be collecting keys. These are obtained by doing enough damage to an enemy stronghold to draw out a slightly stronger base leader (mini-boss is to grand a term, these guys are only slightly tougher than the rank and file). Beat him, and you've got the key. Here's the catch, though; if you lose that base to enemy forces, your key goes with it. Since you need a certain number of keys or types of keys to open that map's actual boss, capturing and keeping bases is almost more important here than it has even been in a musou game.

The way stages are set up are unlike any previous musou game and add a lot to Fate/Extella's sense of speed. Instead of running from base to base inside a large map, bases are self-contained small areas that are reached by warp gates. This makes the game more hectic by not giving you the breather you get by running from place to place, but it makes it much, much easier to position yourself to help defend weakened bases or take new ones for yourself. In Hyrule Warriors, I though the ability to switch between characters was the best way imaginable to make base defense viable, but clearly this is a superior system. The one thing I've always disliked about musou games is the feeling of helplessness when you know a distant base is about to fall and there is just no way to get there in time to save it; Fate/Extella solves that and gives the player a much greater feeling of control over how battles play out. If I had to pick the game's biggest selling point, the warps would easily top my list. 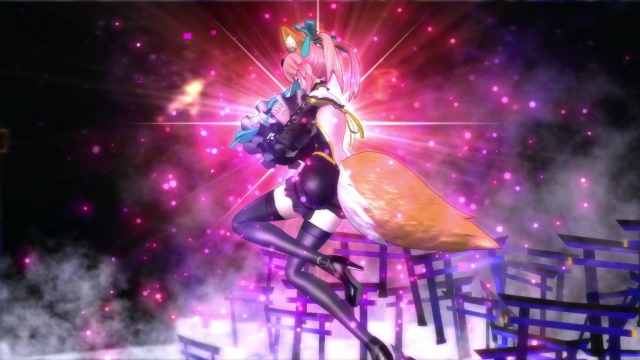 Oh, and since everyone seems to be so worried about how multiplatform games run on the Switch, I'll pop in a quick note about it here. It runs fine; much better than its PSVita counterpart and just barely shy of equal to the PS4 version. The framerate is pretty steady though most of the game, with only a little slowdown here and there. So rest assured, those who base the entirety of their opinion on a game on how well it runs and what resolution it is rendered in, Fate/Extella gets high marks in this department. I really wish I didn't have to include this stuff in my reviews because, honestly, it only seems to make a difference to Internet trolls and their ability to complain about literally everything, but that's the world we live in now, I guess.

All in all, I really enjoyed Fate/Extella: The Umbral Star. The plot made less than no sense, which, I understand, is probably more my fault than the game's, but everything else was pretty solid. The warps and keys added a fresh twist to the seemingly deathless musou genre, and the sense of speed kept my interest long enough to finish the entire game pretty quickly. There are a TON of unlockables for those who don't think one playthrough is enough, including outfits, characters, modes and more, but with Fire Emblem Warriors on the horizon, I decided one solid musou playthrough was plenty for now. If musou games are your thing or you are just passing the time until Mario Odyssey and Fire Emblem Warriors, you could do a whole lot worse than Fate/Extella: The Umbral Star.

Final Rating: 77% - A good way to pass the time until Fire Emblem comes out.