The Skylanders series' latest entry, Skylanders Imaginators becomes one of the Switch's first titles. If you've played the "toys to life" games before on other consoles, then you're familiar with how those games make use of a portal to bring toy figures into the game as playable characters - put a Skylander figure on the portal, and you'll be playing with that character on the screen. There's no portal with the Switch version of the game, though. Instead bringing a figure into the game is a two-step process. From the pause menu you select the "switch Skylander" option, after which the game prompts you to hold your figure over the right thumbstick on the controller and after a short load time your figure will appear in the game. The lack of a portal keeps the game more portable in the spirit of the Switch's play anywhere nature, but you do lose out on the experience of seeing the figure sitting on a glowing portal as you play. And since the game stores your figure collection for you electronically, you don't really need the figures at all once you've scanned them in (word of caution: it seems to take a couple of scans of each figure before the game stops asking you to scan it, so make sure you can switch to the new character without having the figure on-hand before you run out the door and leave the figure at home). This makes the Skylander experience on Switch a bit like the amiibo experience - scan a figure to unlock something in your game and then put the figure on a display shelf. Even though the series is new to the Switch since the Switch is so new, Skylanders Imaginators will scan any figure from previous Skylanders games, although the vehicles from Skylanders SuperChargers and traps from Trap Team are exceptions. The traps will not scan at all and are not supported. Vehicles will scan, but the Switch version of Imaginators forgoes the game's racing events from other console versions of the game. The vehicles are used to unlock bonus chests that contain random additional parts for use in creating your own Skylanders, but they don't come into play beyond that. The other thing I noticed with older figures is that the Swap Force figures scan as the base character - it doesn't matter what top you have attached, so there's no swapping.

Each iteration of the Skylanders series brings with it a new innovation, and with Imaginators that innovation is the ability to create your own custom Skylander. It begins with a "creation crystal", a toy that resembles a cystral suspended in a glass tube. You'll need one creation crystal for each custom Skylander that you want to create as each crystal will only store a single Skylander. When you place a new crystal on the right stick, you'll be immediately be taken to the game's Skylander creation tool. The first step will be to select your Skylander's battle class which will determine the Skylander's attack style and weapon type, and choices include Brawler, Ninja, and Bowslinger. While the game will allow you to change your mind on just about any aspect of your custom Skylander in the future, the battle class is the one choice that's permanent. Fortunately you can view a preview of what each class is like before committing to it.

Once that decision is made you will be given a lot of control over the look and personality of your Skylander. There are a large number of head, body, arm, and leg options to choose from, and as you play the game you'll be able to unlock even more of them. In addition, there are plenty of weapons and accessories to choose from, and you can even select your Skylander's voice and add effects to it, pick a catch phrase, and select its theme music. None of these choices are permanent, and at any time during the game you can bring up the editor to equip a new item or to completely change the look of your Skylander. 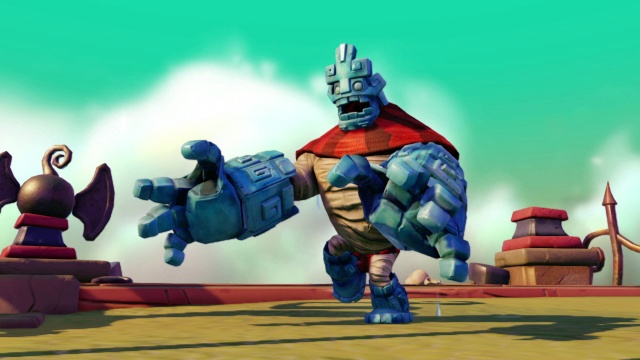 As you play the game you will find chests containing 'Imaginite' or earn chests by completing goals in the game's levels. When an Imaginite crystal is broken, you'll be awarded a new item for use in the creation tool. It's basically like opening blind packs, complete with four different rarity levels for the items that you find. You can also buy additional chests with Imaginite with IAP microtransactions, but the rate at which you collect chests in the game is plenty high enough to keep the temptation of buying additional chests manageable.

The steady stream of new parts, weapons, accessories, voices, and more that are earned while playing help the game tie in to the loot-driven draw of action-RPGS that it has only barely touched upon in prior games of the series. Players will find themselves endlessly checking out the latest gear they've found and tinkering with the look and loadout of their custom Skylander.

The custom Imaginators are not the only new series of Skylanders in Imaginators - the game introduces Sensei figures as well. These figures are larger than typical Skylanders figures, and long-time Skylanders fans are sure to appreciate that they include some former villains like Wolfgang and Dr. Krankcase. Sensei figures are more powerful than typical Skylanders, and each one has the ability to unleash a super move, the Sky-Chi. They're more than just high-powered Skylanders, though. Each new Sensei that is placed on the portal will increase the level cap for all Imaginators by one. They also unlock access to special Sensei levels and grant Skylanders of the same Battle Class a new ultimate attack. As with previous Skylanders games you can enjoy the game without buying additional Sensei figures, but to experience the whole thing it's going to take additional figure purchases. You'll also want to coordinate your custom Skylanders' battle classes with the Sensei figures that you buy if you're not planning on picking up a Sensei for each class.

The game itself is still primarily battle-focused with light platform and puzzle gameplay thrown in to round things out. The battles are certainly fun - there's a very wide array of enemies in the game with a large variety of attack styles. On the easy difficulty settings younger gamers will be able to button-mash to their hearts' content, but the higher settings will require you to be smart about how you take on your foes. 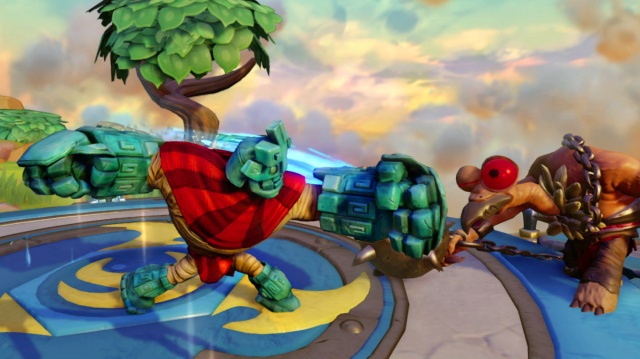 The first Skylanders games had a variety of levels, but although they looked different they played pretty similarly to each other. In Imaginators there is a lot of variety to the gameplay, with puzzles, obstacles, and dangers unique to each level and in sync with the levels' themes. Each level has a number of goals, but accomplishing them all is not mandatory for completing the levels. You can replay any level at any time to look for the secrets that you missed the first time through or to complete all the goals to receive a full three-star rating for the level. The story that drives you through the primary levels is rather humorous as series bad guy Kaos is trying his hand at character creation, sending one goofy 'Doomlander' after another at the Skylanders. In a change from previous games, Skylanders appear in the game as NPCs, and you'll spend a lot of time interacting with characters the likes of Spyro and Stealth Elf.

In addition to the game's story levels, there are other levels that offer other styles of play. A battle arena will test your combat skills against waves of enemies (the running commentary by the arena announcers is wonderful), and there are game tables where you can try your hand at the strategy tile-based game Creation Clash. You can still play the racing levels without vehicle toys, but if you do have them you can use those vehicles in the races.

Skylanders Imaginators on the Switch gives you full Skylanders fun on the go, but there's something missing to the experience when you simply scan each toy and then put it up on the shelf. It's great to be able to create your own Skylander, though, and to watch the character evolve as you discover new parts and gear on your adventures. Overall, it's a solid platformer-action/RPG lite hybrid that makes for a nice early addition to your Switch library.

Final Rating: 85% - You can take the Skylanders on the go, but the figures stay home.