Dr Maybee and the Adventures of Scarygirl Review

Dr Maybee and the Adventures of Scarygirl stars Scarygirl, who kind of resembles an undead pirate. The game is based on a graphic novel, simply titled Scarygirl, and follows the same basic plotline as the novel. Scarygirl is not quite sure where she comes from, but is sure that if she can find the mysterious man haunting her dreams she’ll have some answers. Her quest becomes your quest, and in control of Scarygirl you’re off to find that strange mystery man.

Dr Maybee and the Adventures of Scarygirl’s graphic novel roots really come through in its look. I love the art style, which is a bit like Gary Baseman meets Tim Burton, and the otherworldly and dreamlike environments it creates. What I don’t like, however, are the graphics. The game looks like it was created for a completely different screen resolution and then very badly scaled for the PSP’s screen. It’s oddly blocky and pixelated in places, and you can not play the game without constantly thinking about how incongruous the whole thing looks. 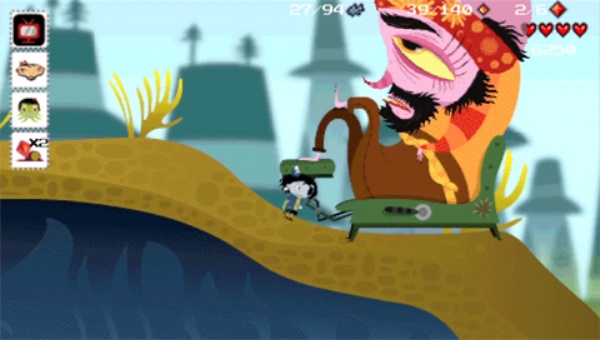 The gameplay is more standard, following a standard platforming model. You can make Scarygirl jump and do a kind of spin attack and you must hop through the game’s levels avoiding the enemies along the way and collecting this game’s equivalent of coins, which in this case happen to be fish. The levels can be rather extensive with plenty of hidden things to find, but some rather major design issues will sap your motivation to explore it all.

The first problem is a dearth of checkpoints which will have you frustratingly replaying too large sections of the game when you make a mistake. The second is by far the worst and almost makes the game unplayable. Dr Maybee and the Adventures of Scarygirl is a platform game in which it’s nearly impossible to find the platforms. As you hop around the levels it’s never clear what you can land on and what you can’t, and jumping your way up an elegantly drawn background object is a constant trial and error struggle. There are no indicators to help you determine what’s a solid surface and what isn’t, and there’s no rhyme or reason to what the developers have deemed to be physical surfaces and what are merely artistic elements. You spend an inordinate amount of time jumping back and forth looking for a landing, falling down below, and then trying to work your way back to where you were. It’s about as much fun as it sounds.

Final Rating: 30%. If you want to visit the world of Scarygirl, stick to the book.