The Angry Birds Movie 2 VR: Under Pressure opens with a trailer that provides the flimsy excuse that's apparently needed for packing a bunch of birds and pigs onto a giant submarine and ship them off to an island to take on some eagles. Perhaps that's the plot of the movie which, full disclosure I haven't seen, but it doesn't really matter how all these pigs and birds ended up in a submarine together, just that you need to work together in what is essentially a co-op time-management puzzle game.

One person dons the VR headset, essentially becoming the captain of the submarine, while from one to three other players become the crew, racing about to produce and load ammunition for the captain, as well as stowing away any loot the captain has managed to grab. The captain doesn't get to control the submarine as it makes its way towards Eagle Island on a rail moving along a level at a time, but instead mans the cannon that fires the submarine's weapons and the plunger that can be used to both move things around the submarine's deck and to capture treasure chests lying on the sea floor. 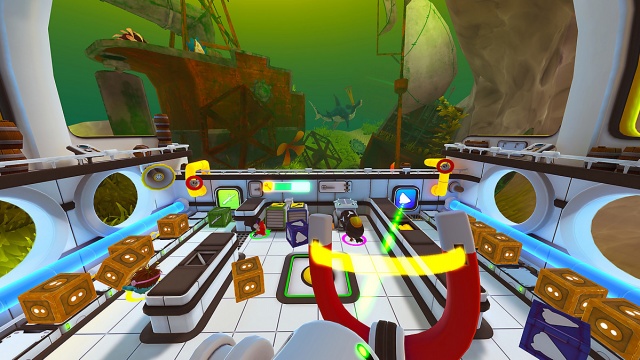 The players playing outside of VR are responsible for keeping the sub's production lines running. This involves grabbing resource cubes from generators and carrying them to other generators to create ammo, repairing malfunctioning generators, removing trash and bombs and dumping them into an incinerator, and moving any captured treasure to storage bins. The ammo is critical to keeping the sub safe and for grabbing treasure, but at the end of each level your success will be based on how much treasure you were able to move to the storage spots with points deducted for any junk you left un-incinerated on the sub's deck.

The initial levels are pretty straightforward, but soon additional complications are introduced. Moving conveyer belts, split-level decks, and maze-like corridors ramp-up the challenge as you make your way through the game. As the difficulty increases, so does the need for multiple players. Things are challenging with four players working together well, calling out what needs to be done and assigning roles to each player, but with two players, let alone someone trying to go solo, the game becomes pretty difficult. 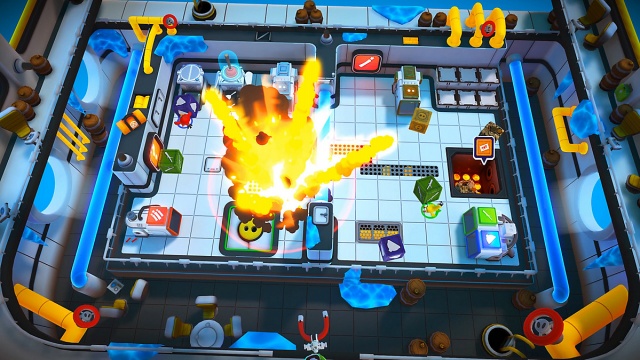 As a party game, Under Pressure works surprisingly well for a movie tie-in game. With the sub commander calling out the resources currently needed and the other players working out the details of how to get those resources, it feels like a true co-op experience in which every player plays a part in the team's success. When you fall short of completing a level there always seems to be a new strategy or role assignment to try the next time through. If time-management games aren't your thing, Under Pressure isn't going to change your mind, and I can see this kind of game being stressful to some people. However, if you're looking for a way to make VR gameplay more of a shared experience, Under Pressure is a good way to get everyone involved.