Darknet is a hacking-themed puzzle game - "themed" because hacking is used to setup the game's story and set its mood more than anything else, and the puzzle gameplay is more of an exercise in logic and pattern recognition than it is a voyage into the dark regions of cyberspace.

The game is a series of node-capture logic puzzles played on two levels. On the higher level, a network of interconnected nodes fans out from a central node. Your goal for the level is to capture that central node, but to get to it you'll need to capture the nodes along one of the paths leading to it. Capturing a node requires you to defeat its defenses, which takes you to the lower level of gameplay. Here the gameplay takes place on a triangular grid of interconnected nodes. Some of the nodes are occupied by defensive "programs", and you begin your attack by injecting a "virus" into one or more of the nodes. Once you do, the virus will spread in steps to each connected node. If one of those nodes contains a defensive program, it will in turn begin to spread to adjacent nodes, wiping out any of your virus captured nodes in the process. If the defensive nodes manage to wipe out your nodes before your virus spreads to the core node and you have no more viruses remaining, you'll lose and will have to attempt to complete the level again. If you capture the central node, though, you'll be given control of the corresponding node on the higher level network. 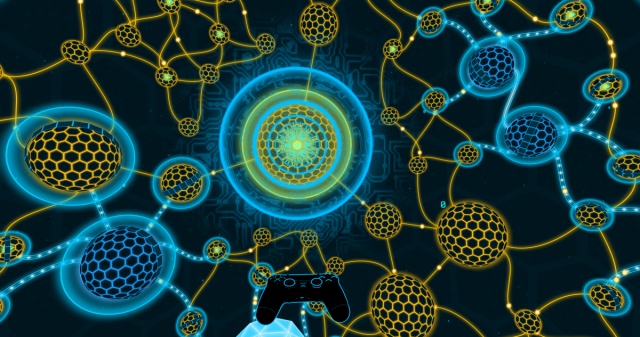 Since the viruses and defenses advance along the network to all adjacent nodes in stepped phases, there's no random element to the puzzles. Inject viruses into the same nodes a second time, and the level will play out in exactly the same way. Solving the puzzles requires recognizing how the viruses will spread across the grid and when they will trigger the defenses. Often this will require releasing the viruses in stages, sacrificing a few to remove defensive obstacles so that a virus released afterwards will have a clear path to the target node. Sometimes trial and error comes into play, especially on the larger grids, as you'll find that things can play out differently than you expected once they are set into motion. There's no penalty for losing, so you're free to experiment a little before the solution becomes clear to you.

Capturing nodes on the high level network will award you with cash, with the amount that you receive proportional to the difficulty of the node's puzzle. This money is used to purchase additional viruses, which will give you a larger number of available viruses to deploy when you're trying to capture a node. You can also purchase special bonus items such as "hydras", which are one-time use items that can be deployed to capture unshielded nodes on the higher level network. The more viruses and bonus items you buy the more expensive they become, so the game keeps them rare enough that they'll never quit be as available as you'd like them to be.

While Darknet is a VR game, it really doesn't need to be a VR game. There's the general VR coolness immersion factor you get from any VR game - in this case you feel like you're suspended in space while a giant network floats in front of you - but the game could easily be played as a standard, scree-based game. If you're hungry for more VR titles and that's the primary reason that you're interested in Darknet, then you should probably pass on the game. Once the initial novelty of the presentation wears-off, which won't take too long, you're left with a puzzle game. If you enjoy logic-based puzzle games, though, Darknet is certainly recommendable. It's not the kind of puzzle game that will keep you pushing to solve just one more level, but it's an enjoyable enough distraction when you're in the mood for a game in the genre.