Sonic Origins is a collection of the first four-ish games that were released on the SEGA Genesis system. Most of you have probably played Sonic the Hedgehog and Sonic the Hedgehog 2 at some point as they’ve been re-released almost an innumerable number of times on most of the platforms that have come after the Genesis, and if not, you’ve almost certainly at least heard of the blue hedgehog in red sneakers. The next game in the collection, Sonic CD, was only playable back in the day with the SEGA CD add-on hooked into a Genesis. Lastly, we have Sonic the Hedgehog 3 & Knuckles which is where we get into the “ish” in “four-ish”. Sonic the Hedgehog 3 was originally released as a SEGA Genesis cart on its own, soon followed by Sonic & Knuckles which wasn’t a separate cartridge, but snapped into the Sonic the Hedgehog 3 cartridge making it a sort of meatspace DLC expansion. Lore has it that the two games were originally envisioned to be a larger, single release, but that time and budget constraints led to the two-tiered release. In that case, Sonic Origins has realized the original dream by combing the two into a single game, Sonic the Hedgehog 3 & Knuckles. Missing from the original Sonic timeline is Sonic Chaos, a game that came chronologically after Sonic CD, but was released on SEGA’s Master System and Game Gear platforms. While it never appeared on the Genesis and was a large part inspired by Sonic the Hedgehog 2, it would have been nice to see this rare game included in an “origins” collection. 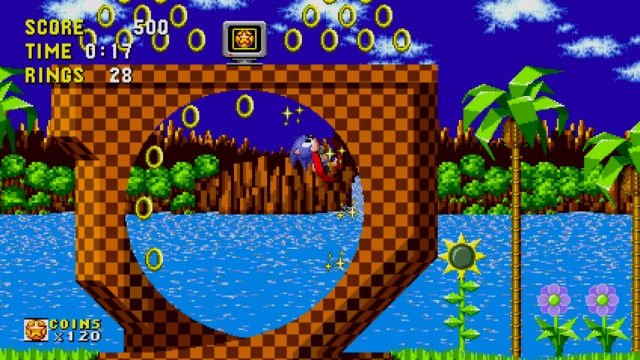 All of the games are available to play in their original format, that is with a 4:3 CRT TV screen ratio and with limited lives. Sonic Origins also provides an “Anniversary Mode” which gives the games a full-screen format. This update to the originals lets the games fill your modern screen and lets you see what’s coming ahead sooner, but it’s not a graphical remaster - all of the games still have their original 16-bit pixelated look. The Anniversary Mode games also feature animated sequences that serve as the cutscenes the originals never had the chance to have. They don’t really expand much on the games’ original basic storyline of “stop the evil scientist from turning cute critters into evil robots”, but they are all nicely done and enjoyable to watch. It’s fun to see a full panoramic view of the Green Hill Zone after spending so much time in a flat slice of it over the years. 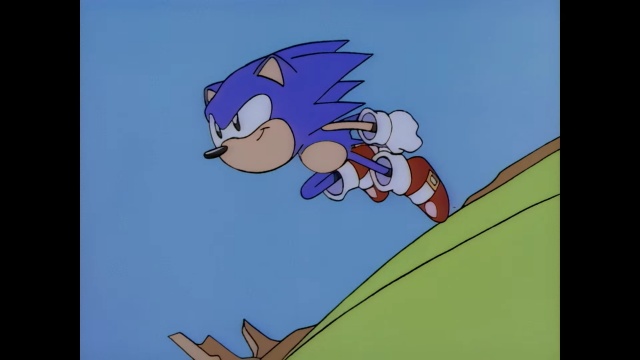 Another change that comes with the Anniversary Mode makeover is that the limited lives restriction has been lifted. You will still die if you fall into an abyss or take any damage when your ring count is zero, but you’ll never face the prospect of having to start over from the beginning again. You’ll just be sent back to the most recently visited checkpoint, and the games are liberal with their checkpoints, and go from there. This change will allow you to breeze through the games – they were designed around the central feature of limited lives, after all – and render certain features, like the hidden one-up signs, moot. It would have been nice to have the option to play the original games with limited lives as intended, but to have a rewind option available. So many re-releases of console classics have that feature these days that it’s a bit surprising that it’s missing here.

Rings still serve the role of providing a shield against a mistake, but hitting 100 no longer awards an extra life. There’s still some incentive to hold on to more than one ring, though, as reaching the end of a stage with 100 rings opens a bonus level that gives you the chance to earn a chaos emerald. Earning those emeralds is the only way to see a game’s full ending, otherwise your reward is a “try again” message.

While you can play the games in any order that you’d like, the game also provides a story mode which presents all of the games as a single, linear experience. You can pick up where you left off between games, and see your progress percentage as you make your way through the games. It’s not like games of the 90s ever tried to build a cohesive, cross-sequel narrative, so it’s not a story mode in that sense, but it’s still an enjoyable enough way to play through the games in the order that they were originally released. There are a few other ways to enjoy the games, such as Boss Rush mode which just cuts straight to the boss fights, Mission mode which collects short challenges from each game, and Mirror mode, which lets you play the games in reverse once you’ve beat them going forwards.

As for the games themselves, they are true to their origins although now you can use Sonic, Tails, or Knuckles in any game, so you can anachronistically play through Sonic the Hedgehog’s Green Hills Zone as Knuckles. Everything that made them a part of a classic game franchise still holds up well several decades later, but you also get the levels that were frustrating to play back in the day and are just as frustrating today.

Rounding out the collection is a museum where you can listen to any of the music tracks from the games, view the original North American, European, and Japanese pack art, and peruse the original game manuals (yes, games used to come with written instructions). It’s interesting enough to browse through the museum, but it’s something that you’ll probably only ever do once and could basically do on the internet anyway. Still, it’s nice to have it all included here to save you some time on Google. 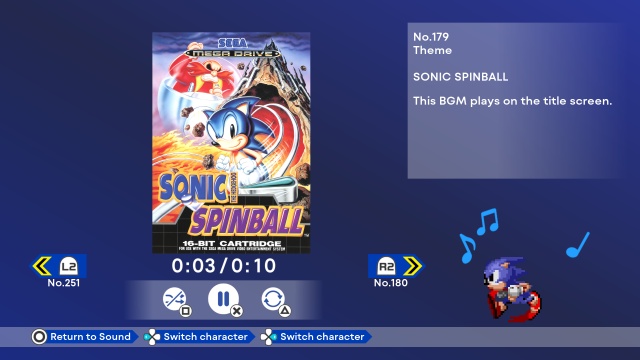 Final Rating: 80% - Play through the genesis of the Sonic legend.